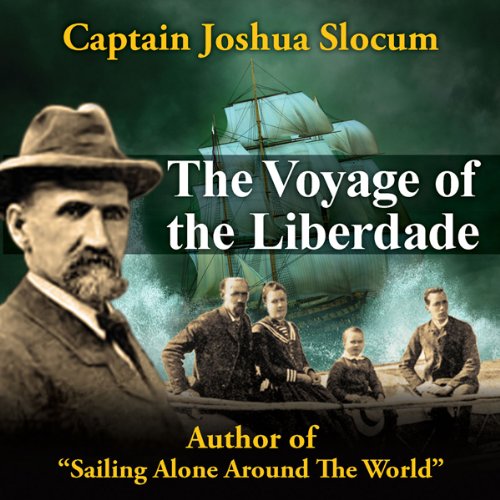 Voyage of the Liberdade

Voyage of the Liberdade

A tall ship is trapped on a sandbar in 1885, broadsided by heavy seas and doomed to destruction on a lonely Brazilian Beach. Thus begins an incredible sea odyssey by a North American sea captain, his wife, and two sons. To return his family to safety, Captain Joshua Slocum builds a new boat out of the wreckage of the old. With his family, he sails along the perilous South American coast, crosses the Caribbean Sea, and navigates up the United States coast to Washington, D.C.

The Voyage of the Liberdade is a first-person telling of this exciting adventure in it's first audiobook recording. This audiobook also includes two bonus true adventures written by Captain Slocum: "Rescue of Some Gilbert Islanders" and "The Voyage of the Destroyer from New York to Brazil", his perilous piloting of a very old, badly leaking worn out battleship, sold by the United States to the Brazilian Navy. These three adventures were experienced and written by Captain Slocum before he wrote the most famous sailing adventures ever written, Sailing Alone around the World.

What listeners say about Voyage of the Liberdade

Glad it was cheap!

Good that this was a short book (non-fiction "novella" as it were), as I never got used to the author's rather verbose, corny style. I suppose it may well be the way Victorian sea captains spoke, and I assumed that the narrator faithfully reproduced that effect, but the result just wasn't for me; had this been a full-length work, I doubt I'd have finished it. The final hour (25%) consists of a second-hand tale from the South Seas written by Slocum, based on reports he says he "translated" with the aid of a Polynesian Bible as his Rosetta Stone; I gave that part a pass.

I had my doubts about "Sailing Alone Around the World", which now goes into the Highly Unlikely category.

True Tails of the Sea

Joshua's story is true enough i can get a since of being there. Great lifes Story

The person reading this sounds like he’s crying with every word. Great story ruined by a terrible performance.

The first part of the book is about owning and operating a merchant sailing vessel in the late nineteenth century. The daily challenges of dealing with crew, repairs, local politics, shippers, and outbreaks of illness, are entertaining and told with a dry sense of humor that looks toward the positive side of mishaps. The second part of the story shows the owner's ingenuity and seamanship as his family builds a small ship by hand, and sails her home. A couple of "bonus tracks" tell of the owner's adventures in the rescue of some pacific islanders and in the delivery of a gun ship. The performance was spot-on, with occasional sound effects to place the listener in the story. The reader does well with the wordy style of the period. Josh Slocum's humor and solid spirit really come through.

fantastic story. The narration takes a little while to get used to but the sound effects nearly ended this for me before it even began. Very distracting. thankfully it is not throughout the entire book.

This book has a narrator whose mannered, over-dramatic style was extremely annoying and odd. He raises his voice in a questioning tone for no clear reason and seems to think that that old-fashioned prose style calls for weird delivery, with an affected accent, rising and fall tones, and excessive emphases. Background sound effects of wind, waves, and seabirds are distracting. I have no difficulty enjoying books written in earlier centuries, from Greek tragedies to Victorian novels, but the narrator made this unbearable and hard to understand. I might have enjoyed this with a different narrator or as written text, but I found this book ruined by poor narration.

I found the background noise distracting and not enjoyable. Didn't finish exchange for another book