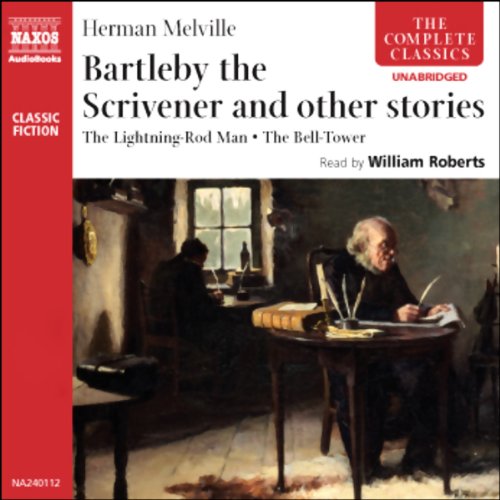 Bartleby the Scrivener and Other Stories

Herman Melville is now seen as one of the great figures in American literature, a man who expanded the role of the novel and gave new and complex depths to the meaning of a story. His best work uses the form of the novel or the story as a means of carrying and discussing concerns about the nature of humanity, the role of God, and a sometimes satiric, sometimes bitter, examination of colonialism and capitalism. All of these are evident in the three stories included here, but his decision to write shorter fiction was to some extent forced on him.

Bartleby the Scrivener, The Lightning-Rod Man, and The Bell-Tower were all originally published in Putnam's Monthly Magazine and collected together with three other stories in The Piazza Tales of 1856 (the title came from the only piece written especially for the collection, an introductory sketch called The Piazza). Despite the circumstances that made him turn to the shorter form, Melville enjoyed the technical challenges it posed, and he regarded many of his short stories more highly than some of his successful longer works. But they were just as loaded with allegory, symbolism, and unease at man's condition.

What listeners say about Bartleby the Scrivener and Other Stories

A rare misfire from Naxos. The narration and music are both strident and jarring. William Roberts has done excellent work on other audiobooks, but here he sounds like he's trying to imitate a 1930s radio announcer. The style works OK for "The Lightning Rod Man," but it feels out of kilter in "Bartleby the Scrivener," and "The Bell Tower" is a mess. (I'm left with the feeling that "The Bell Tower" MIGHT be a haunting and beautiful tale; here it's just confusing. It would be nice to hear someone else's take on it.) The clashing music is a particular disappointment, since Naxos usually does this to perfection.

It's a shame. "Moby Dick" is well represented on Audible, but it's slim pickings for Melville's short stories. Naxos is pretty close to the gold standard for most classic fiction, but they missed the boat on this one.

I hadn't expected a story of such dry humor and Kafkaesque qualities as "Bartleby the Scrivener" from the author of "Moby Dick". The story is intriguing and more than a little strange. The reading is quite good.