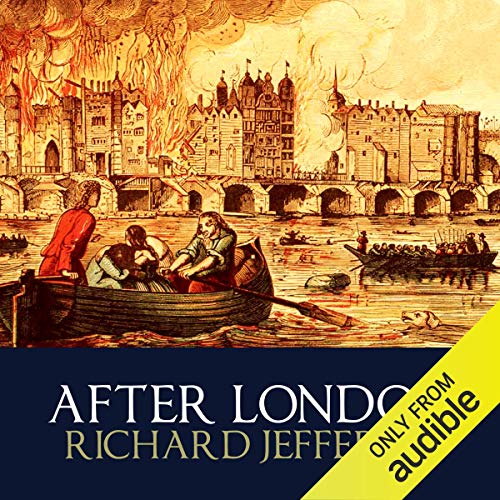 After London or Wild England

By: Richard Jefferies
Narrated by: Barnaby Edwards
Try for £0.00

Narrator Barnaby Edwards does an excellent interpretation of Victorian intonation and cadence in this early example of post-apocalyptic fiction. Edwards' performance lends an elegant formality to this story set in an England depopulated after a sudden, unnamed catastrophe, where the remaining inhabitants live in a quasi-medieval society. Described by the Observer as one of the most beautiful Victorian novels, After London's descriptions of the landscapes and creatures of an England gone back to nature are vivid and captivating, and Edwards' classic storytelling style lets them linger in the listeners' mind.

After London can be seen as an early example of post-apocalyptic fiction: after some sudden and unspecified catastrophe has depopulated England, the countryside reverts to nature, and the few survivors to a quasi-medieval way of life. The audiobook has two parts. The first, The Relapse into Barbarism, is the account by some later historian of the fall of civilisation and its consequences, with a loving description of nature reclaiming England: fields becoming overrun by forest, domesticated animals running wild, roads and towns becoming overgrown, the hated London reverting to lake and poisonous swampland.

The second part, Wild England, is largely a straightforward adventure set many years later in the wild landscape and society (here too Jefferies was setting an example for the genre); but the opening section, despite some improbabilities, has been much admired for its rigour and compelling narrative.

John Richard Jefferies (6 November 1848 – 14 August 1887) was an English nature writer, noted for his depiction of English rural life in essays, books of natural history, and novels. His childhood on a small Wiltshire farm had a great influence on him and provides the background to all his major works of fiction. For all that, these show a remarkable diversity, including Bevis (1882), a classic children's book, and After London (1885), an early work of science fiction.

What listeners say about After London or Wild England

Despite a somewhat dated style, I found this vision of a post apocalyptic world quite convincing.

Richard Jefferies' After London is a 19th century vision of post-apocalyse England. Although the cause of the depopulation is never explained, nor is the future timeframe (although it is clearly multiple generations into the future), the descriptions of both nature as well as human society are offered in exquisite detail. The story begins with a detailed presentation of nature reclaiming much of the land as well as most domesticated animals going feral. The bulk of the tale concerns an individual of the aristocracy, but on the lower end and largely ignored. He elects to go on a peregrination and has many adventures and encounters what appears to be the remains of London which is described as poisonous,

Jefferies offers a fascinating description of nature reclaiming her land after human depopulation. On the sociological side, he offers brutish living conditions that are distinctly medieval with reference to the ancients in the same manner that medieval individuals would have regarded the Romans. Technology is almost non-existent and there is little in the way of any progress.

The narration is adequate with decent character distinction and good pacing.