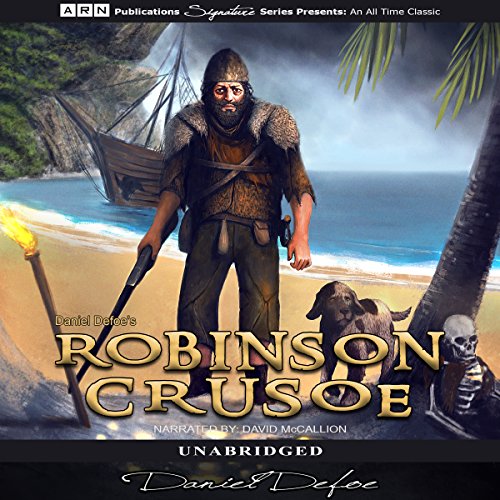 Robinson Crusoe by Daniel Defoe tells the story of a young Englishman who, against the best advice of his father, decides to leave his comfortable surroundings and take to the high seas in search of adventure. However, upon securing his first voyage, he begins to realize that a sailor's life is not as easy as he had imagined - and the experience he goes through is just the start of a series of events that will eventually lead him to be stranded on a desert island for the best part of three decades.

When he first arrives on the island, he thinks all is lost, and although he is the only one to make it to the shore alive when all his other shipmates have been killed, he curses his misfortune at being left on this desolate land. But he soon starts to make the best of his surroundings, building himself a home and learning how to feed himself. But when he discovers the island is occasionally visited by cannibals, he sees his quiet life turned upside down. He will eventually find a friend when he confronts these savages and rescues one who is about to be eaten. But all he can think of is getting back home to England, and when an opportunity presents itself to escape his solitude, he must fight a band of mutineers to secure his freedom.

The book was first published in 1719 and originally led a lot of people to think it was a true story, as the eponymous castaway was credited as the author. It is considered to have been the beginning of realistic fiction as a literary genre and remains a classic to this day.

What listeners say about Robinson Crusoe

McCallion does an excellent job

This was my first book read by David McCallion and he did an excellent job.
I also enjoyed the wonderful way Defoe writes. for an 18th century novel it was very easy to read. The language flowed very easy.

A little slow to start but overall a good listen. I would listen to this again.

I greatly enjoyed this book. Unlike other reviews, I found the details to add depth and enabled me to better drift into the experience of the main character almost as if I was shipwrecked with him. I also appreciated the author’s understanding of the gospel and how it was applied in the story. Overall, I enjoyed every aspect of this story. As far as the narration, I think the narrator did a wonderful job making the story and character come alive. He came across, to me at least, as contemplative and introspective which is what I would expect for man alone on a deserted island for 30 years.