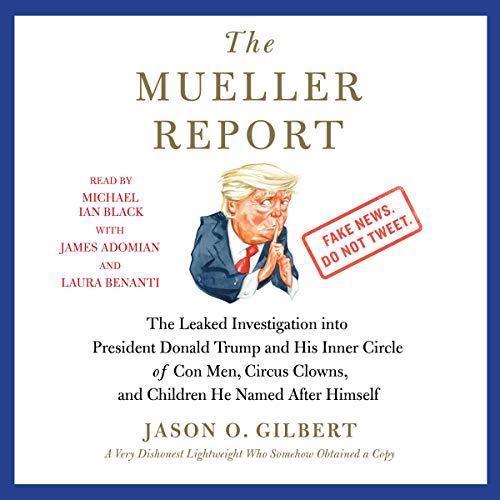 The most anticipated literary event of our time: the publication of The Mueller Report, the full, uproarious, and Totally Fake findings of Robert Mueller’s investigation into the election of President Donald J. Trump, leaked to the Very Biased and Highly Unemployed comedy writer Jason O. Gilbert by an anonymous, Deep Throat-esque source known only as “Melania T”.

The Mueller Report is 2018’s most anticipated release that doesn’t involve Chris Pratt punching a dinosaur, and for good reason: The entire country is waiting to see what former FBI director and current special counsel Robert Mueller has dug up on former mail-order steak salesman and current US president Donald J. Trump. That wait is over - sort of - with the publication of The Mueller Report by Jason O. Gilbert.

Leaked to Gilbert by an anonymous White House source who goes only by the mysterious code name “Melania T.”, The Mueller Report is a hilarious inventory of the dirt, grime, and Big Mac crumbs that the special counsel has collected on President Trump during his months of investigation. Filled with interview transcripts, intercepted phone calls, incriminating emails, text exchanges, ALL-CAPS TRUMP TWEETS WITH SPELING ERRORS, and more, it whisks listeners from the leaky White House to an even leakier Ritz-Carlton hotel room in Moscow, from Donald Trump Jr.’s covert meeting with Russians in Trump Tower to Michael Cohen’s secret sale of a Trump Tower apartment to a shell corporation called Oligarch LLC.

And, for the first time, you’ll find out what really happened in that Moscow Ritz-Carlton hotel room between Donald Trump and two well-hydrated Russian escorts. NOT GOOD!

Unlike the Trump presidency, The Mueller Report is so much fun you won’t want it to end. Order your copy now, while books are still legal in America!

What listeners say about The Mueller Report

This was kind of childish. I listened to it for a while, but then it got soooooo boring, I quit

Top-notch entertainers reading clever political satire - what's not to like? The writing is impressive -it's full of references to pop and political culture. It reminds me of how Tina Fey writes where every line is either joke or a lead-in to a joke. Highly recommend this entertaining and very funny book!

Fake readers of the contents!

This could have been better done by NOT using odd voices to read characters' testimony. Makes the WHOLE THING sound phoney and greatly distracts from the report itself. Overall, a big disappointment in delivery. Don't waste your time/money on this.

This is not the report

I was trying to download the Washington post actual mueller report. And instead I got this crap. Why does audible make it such a pain in the ass to get a new title?

D'illusion ! The American left is pathetic !

Struggled to finish the rantings of the this book. It seems that those who supported Hillary will never accept she lost. Image how much more successful President Trump could be if they were not constantly tripping over themselves to try and make him fail. And yet, he continues to make the country a better place. Such simpletons !