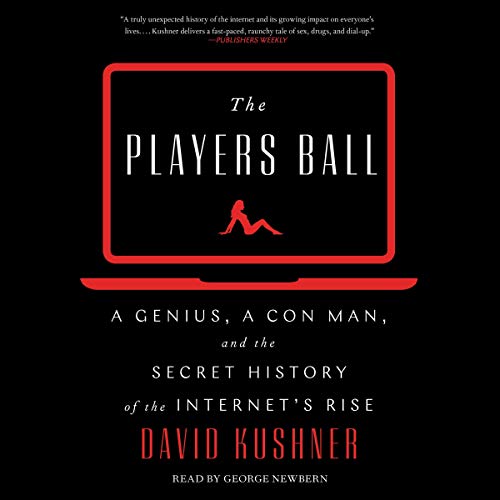 By: David Kushner
Narrated by: George Newbern
Try for £0.00

"An engrossing microcosm of the internet’s Wild West years" (Kirkus Reviews), award-winning journalist David Kushner tells the incredible battle between the founder of Match.com and the con man who swindled him out of the website Sex.com, resulting in an all-out war for control for what still powers the internet today: love and sex.

In 1994, visionary entrepreneur Gary Kremen used a $2,500 loan to create the first online dating service, Match.com. Only five percent of Americans were using the internet at the time, and even fewer were looking online for love. He quickly bought the Sex.com domain too, betting the combination of love and sex would help propel the internet into the mainstream.

Imagine Kremen’s surprise when he learned that someone named Stephen Michael Cohen had stolen the rights to Sex.com and was already making millions that Kremen would never see. Thus follows the wild true story of Kremen’s and Cohen’s decade-long battle for control. In The Players Ball, author and journalist David Kushner provides a front seat to these must-hear Wild West years online, when innovators and outlaws battled for power and money.

This cat-and-mouse game between a genius and a con man changed the way people connect forever, and is key to understanding the rise and future of the online world.

What listeners say about The Players Ball

One Hell of a Book

The story and telling of it are amazing. It’s a rare book. I highly recommend it.

I was already a fan of David Kushner's work as I listened to his audiobook Masters of Doom. Kushner has an excellent way of re-telling the origins of pieces of technology that we still use today.

In The Players Ball we learn of the origin story of Match.com and Sex.com and the multi-billion dollar battle that ensued. The websites were initially created by tech genius Gary Kremen going against a con-artist/evil-genius Stephen Michael Cohen believing he was the founder of the website.

This book demonstrates how the 90s was the wild west of online businesses and the people behind the sites were motivated for a greater good of society, or for one's own greed. Once the money comes in, so are all the ramifications of alcohol, drugs, and lawsuits.

Hollywood NEEDS to adapt this into a TV miniseries because it has a nerdy lonely character we can root for, and an absolutely despicable liar I myself could not stand and could not believe this all is based on a true story.

a MUST-LISTEN for tech enthusiasts, 90s nostalgia and true crime (white collar crime that is)

A really interesting and fun story covering the early days of the public internet. There's no use in saying much else about it since the description does a good job of explaining it. Very entertaining and if you were involved with the early days of the internet then that's a huge bonus, but if you weren't it doesn't detract from the story. But if you weren't involved with tech back then, let me tell you, this is how things were back then, it was the wild west - no Google, no Facebook, no Twitter - and the world was better place because of it.

The reader did a good professional job, I just save my 5-star ratings for exceptional performances.

How sex and the web intercorse

This is the tale of the evolution of the web being used to on one hand to connect people in a dating site and the abuses that made millions in using it to distribute pornography. It stems from a feud between two people and their egos. At times it seems comical to the point of slapstick and at other times it seems an unavoidable train wreck. It lacks the gripping power of high drama. Its base nature leaves it shear vaudeville. Frankly, I lost interest towards the end for the sheer inability of the main protagonists to become adults.