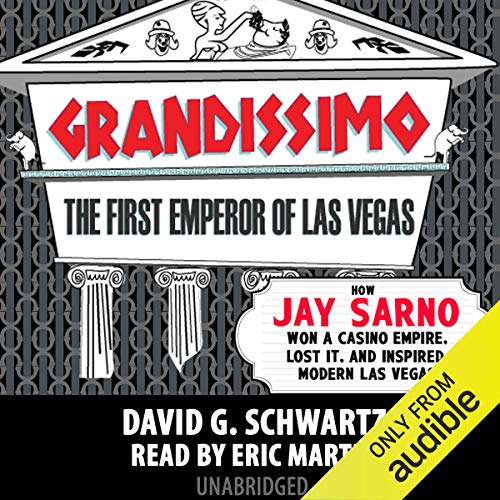 Jay Sarno built two path-breaking Las Vegas casinos, Caesars Palace (1966) and Circus Circus (1968), and planned but did not build a third, the Grandissimo, which would have started the mega-resort era a decade before Steve Wynn built The Mirage. As mobsters and accountants battled for the soul of the last American frontier town, Las Vegas had endless possibilities - if you didn't mind high stakes and stiff odds. Sarno invented the modern Las Vegas casino, but he was part of a dying breed - a back-pocket entrepreneur who'd parlayed a jones for action and a few Teamster loans into a life as a Vegas casino owner.

For all of his accomplishments, his empire didn't last. Sarno sold out of Caesars Palace shortly after it opened - partially to get away from the bookies and gangsters who'd taken over the casino - and he was forced to relinquish control of Circus Circus when the federal government indicted him on charges of offering the largest bribe in IRS history - a bribe he freely admitted paying, on the advice of his attorney, Oscar Goodman. Though he ultimately walked out of court a free man, he never got Circus back. And though he guessed the formula that would open up Las Vegas to millions in the 1990s with the design of the Grandissimo, but he wasn't able to secure the financing for the casino, and when he died in 1984, it remained only a frustrating dream.

Sarno's casinos - and his ideas about how to build casinos - created the template for Las Vegas today. Before him, Las Vegas meant dealers in string ties and bland, functional architecture. He taught the city how to dress up its hotels in fantasy, putting toga dresses on cocktail waitresses and making sure that even the stationery carried through with the theme. He saw Las Vegas as a place where ordinary people could leave their ordinary lives and have extraordinary adventures. And that remains the template for Las Vegas today.

What listeners say about Grandissimo: The First Emperor of Las Vegas

Great Listen - Thanks to Dr. Dave

Would you consider the audio edition of Grandissimo: The First Emperor of Las Vegas to be better than the print version?

I find print version slightly superior, I read it prior to purchasing it on Audible However, it is great to see the nuances that I missed the first time through.

What other book might you compare Grandissimo: The First Emperor of Las Vegas to and why?

Grandissimo was what Super Casino by Pete Earley could have been had Earley had the passion for Las Vegas that David Schwartz displays. After reading Super Casino I always wondered about this Jay Sarno guy, he seemed far more interesting that Bill Bennett and William Pennington. To finally get the whole story and find out the truth - not that Jay Sarno died after a night of satisfying a dozen prostitutes - allowed a much broader view of how ahead of his time Jay really was, and the fact that had Jay not been a "hotel man" Las Vegas would not be place it is today.

I thought Eric Martin did a very good job, however some details and pauses made it seem a bit over the top.

There is so much information you can't really make it though in one sitting but is certainly a book I will listen to over and over.

I can't wait to see what Dr. David Schwartz does next!

To my surprise, this turned out to be a fairly boring book. Schwartz does little with all the literary fodder Las Vegas of the 60's and 70's provides and largely stays on the surface of his characters, their relationships and all the political tugs and pulls. While he certainly does a fine job recounting the life of Jay Sarno, it's all just information, and often too much of it. Where are the major themes, the connections, the grand whole that modern biographies paint so magnificently?

This may very well be valuable reading if you are a Vegas expert already and Sarno is a missing piece of the puzzle for you. But if you, like me, know very little about the town, this is too specific and narrow a book to open it up much.

I enjoyed every second of this one. I would never have guessed on the origins of this city but this book puts it all neatly into place.

interesting story and well to do

I was interested in learning about Sarno and the history he had with LV. I enjoyed the readers storytelling style and he made the book very enjoyable.

Behind All the Glitz

A very interesting story that was largely new information to me about a man, who wasn't very nice, had few scruples and no redeeming characteristics, but did have creative vision. He reminded me of a bull dozer that would run down any one in his way. Well told and delivered without fan fare thereby letting the main character, Jay Sarno, speak for himself.

Very interesting book, I'll never look at Vegas the same way again. I have no idea how these guys ever juggled family life... Their infidelities would never fly with me:)!

Really great book about one of the most colorful characters in Vegas. Jay Sarno steered Vegas in a new way through unearned confidence and enthusiasm. This book paints a very humanizing picture of a man who personifies Vegas to a large extent.

Great story, captures an era, well done all around

First, my compliments go to the author for delivering up a super-readable (listenable) book. The writing is sharp, punchy, and effortlessly zooming between a bigger picture and colorful details. I love it when a writer slows down and really crafts a book, line by line. The choice of Sarno and those times is a great one. So much of American post-war history (in a freer, wilder, risk-embracing time, perhaps the heyday of a certain white middle-class male's fantasies) collides here. This book is easily listenable and I do not lose my train of thought or struggle to follow it in any moment. It just flows and I love to listen.

Eric Martin is among my top favorite narrators, to the point where I buy books just to hear him. It helps that his choice of books (I don't know how that works) agrees with my tastes. He has a sort of Rod Serling-like Twilight Zone voice with a slightly hooded, shadowy, dark punchiness.

I tend to unconsciously pick up stacks of books in a year where the same character surfaces and resurfaces. One of those characters for me now is Jimmy Hoffa, and here he is, among amazing rooms-full of odd characters of fame and weirdness in the mid-1960s. It is just on the verge of psychedelic, with Evel Knievel doing motorcycle jumps over the Caesars fountain, and every other celeb, hood and freak passing through. So yeah, this is a book that has everything from its times, with Hoffa thrown in as a bonus. It's a business story, a cultural history story, and a fun ride, and tops at all those things.

You will never view the fountains at Cesars again

If you love Vegas this a book that is a must. The story of Cesars and Circus Circus is one that will float in your mind over and over again when you walk the strip next after you finish this book. Fun and relaxing structure and narration make this listen very enjoyable.

Building the world of Vegas

a great true story. Fun to listen to. Good narration. In a story that almost reads like fiction.