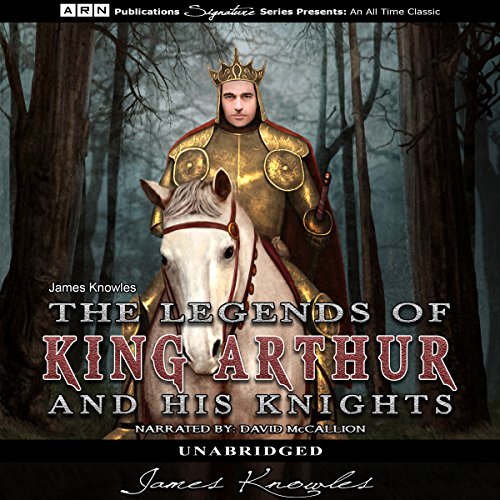 The Legends of King Arthur and His Knights

By: James Knowles
Narrated by: David McCallion
Try for £0.00

Set in Medieval England, The Legends of King Arthur and his Knights by Sir James Knowles takes the listener on one adventure after another filled with magic and danger. When King Vortigern, the unrightful king of England plans to kill Merlin, Merlin tells the prophecy of his downfall and also predicts the birth of a new and powerful king, Arthur Pendragon. Merlin's prediction comes true, and Arthur is born and raised in secret by Merlin. At the same time, Arthur's father, the king of England, is poisoned by his enemies, and his last words proclaim that his son Arthur shall be the new king.

The young Arthur must prove himself by removing a sword from a stone that even the strongest men could not make budge. Once Arthur has removed the sword, he is crowned the new king of England and is worshipped by his followers. In order to protect his new realm, Arthur forms the Knights of the Round Table and pursues his enemies. With Merlin as his constant magical advisor, King Arthur and his knights go on several magical adventures for the greater good and protection of the land. This story is a must-hear for listeners seeking a classic tale that explores the legend of Arthur Pendragon.

The story was a bit tedious for me but enjoyable due to the reading by mccallion.