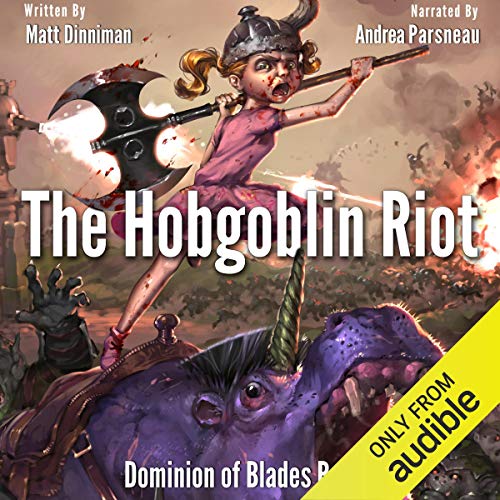 By: Matt Dinniman
Narrated by: Andrea Parsneau,Hays McGee
Try for £0.00

This ain't your daddy's tower defense!

Popper, Jonah, Gretchen, and Alice are back! The Hobgoblin Riot: Dominion of Blades, Book 2. A LitRPG adventure.

It was supposed to be a simple scouting mission. In and out. No fighting. No new quests. Just me, my hippocorn, Alice, and a few hired mercenaries. We were going to tiptoe into the Spiral, get the info we needed, and leave. You know, the Spiral? That tower-defense run that protects the hobgoblin capital from invaders?

Easy, right? Nobody would even know we were there.

What listeners say about The Hobgoblin Riot

They are rioting in the streets to read this!

Hobgoblin Riot, throw back a bottle of beer, Hobgoblin Riot, never know when the polecat’s near! Many thanks to the Cherry Poppin' Daddies for letting me butcher that song in parody.

The Hobgoblin Riot was darn good, though there was a bit of wheel spinning in some ways and some seemingly dropped plotlines that end up paying off at the end so it’s mostly forgiven. Also sometimes it can be a bit confusing as to the timing of certain things if you don't pay attention to the perspective changes.

Almost double the length of book one, feels sort of like 2 books smooshed into one. I don’t have a problem with extended times like this, so long as it is a good book, and I have to say, Popper’s outbursts alone could keep me occupied for a fortnight before I got bored. I really can’t tell if Dinniman can write great one liners, or if Andrea’s reading of them is so superb, but I laughed at every exasperated utterance Popper made. Most likely, it is a combination. The whole book is like that, Dinniman and Parsneau have this great symbiotic relationship going on, he creates a vivid and detailed scene or event, and she adds color and emotion that you simply miss when reading. The book itself is almost a type of comedic horror, a few levels above Abbot and Costello directed by Tobe Hooper or Clive Barker .

The narration by Andrea Parsneau is about as flawless as you can get, she really nails the voices, but if I have to be honest here, I could listen to her read the phone book, so long as she did it in Popper’s voice and threw out a zinger every ten or so numbers. Do we even have phonebooks anymore? The sound quality is beyond reproach, and I don’t think I heard her misspeak a word or a line. I do have to cast a dubious eye at this Hays McGee fella, whom she claims is her husband, and not actually Jeff Hays in vocal disguise. The jury is still out on that one, Andrea! Hays, whoever he really is, does a great job as well, and he backs Andrea’s narration up like he’s been doing this his whole life. Well done, sir. Well, done indeed. Oh, and I loved the way that Andrea handled the mob scene! That is how audio is done. Has she gotten an Oscar or something yet? I have to add that my all time favorite female character voice is that of Harley Quinn, from Batman the Animated Series. My number 2? Andrea’s version of Popper!

Ok, aside from me referencing Abbot and Costello, whom I know 95% of kids alive today have never heard of, I try to keep things simple, so here it is. Book one was great as we got to see the characters feel out who they were, and learn what they could accomplish. It was slick introducing characters that you never see in a traditional gaming party including a hippocorn and polecat (whom I love), and here we get to see them progress and evolve. My biggest issue is that it really feels like two books that got compressed together, and some plotlines were forgotten or dropped in the melding., but the characters are what drive this book. To me, the plotline was incidental to how the characters handled things. That is why I am ok with some of the dropped plots. Maybe book three will address them, maybe not, but I do know one thing for certain, I’ll be there to find out when it does come out! Hopefully you will too, because this is a great book and an amazing series. Don’t pass this one up!!

Points were taken taken for dropped plots and a few places where the story stalled out for a bit, but they were so negligable that it had no effect on my score. Even though I did receive a promo code for this review it in no way influenced my considerations of the material, and in fact, inspired me to be more honest. Getting a code generally makes me harsher as a reviewer as I am more often concerned what someone like Me will decide based on my review.

As seen on the LITRPG AUDIOBOOK PODCAST, please check it out on Youtube.com

Great series with a better performance

I read the book in kindle and jumped on the opportunity to listen to the audiobook. I have said this before but I think it's even more relevant in this case. A good narrator doesn't just read the words on the page, they bring to life the story and characters the author wrote. They are actors or artist on a stage with voice alone as their props. Andrea and Hayes did a great job in bring to life these well storied characters. The book, I couldn't recommend it more. The audio book is great addition to an already well written and illustrated series.

Thanks Matt I have nightmare fuel for years

There are some messed up imaginations in this worlds. The one passed out to Matt should have never made it out of quality control. I might be a light weight when it comes to mind numbing spine shivering disgusting and disturbing. I hate you Matt I hate you I hate you. LITRPG is supposed to be a safe fun read. Not a rollercoaster ride of anguish pain and torment. I've watched anime with less feels than this book.


If you thought this was just some cute little romp through a game world with a tower defence theme you can just forget it. The rich and unrelenting character development makes all of these twisting turning adventures into absolutely gut wrenching trails.

Andrea's ridiculous ability to craft character after character makes this entire experience even more grueling. The woman sounds like an entire village.

The trap that this book creates is enough to make void in your soul so poignant that the only thing that fill it is another book. And considering the next one is so distant the pain is so much more intense.

Oh man is it perfect.

Almost 19 hours, and you'll be rapt through the whole thing. I love this story. And the performance is spectacular. Andrea Parsneau is so good with all these voices and accents, she's like the Swiss Army knife of audiobook narrators. Phenomenal!

The first book was great. The second book is even better. This one switches often in point of view for the mc’s in the party. The point of view of our favorite little barbarian girl and her hippocorn are hilarious. The book has it all. Quests, heroes, villains, loot, and this one even introduces tower defense into it as well. So well done. Love it. I was voluntarily provided this free review copy audiobook by the author, narrator or publisher

I've never played a tower defense game but that's what this book is. The action was practically non-stop and I had difficulty pausing to sleep unless it was at the end of a wave. We didn't get much progress on the overall story line but we did learn a few more things. The main characters continue to develop and we get quite a bit more of their back story. It felt like a middle book in a trilogy or longer series. Overall it was a pleasure to listen to and I can't wait for the next book.

Andrea Parsneau did a really good job on this one too. She was even able to bring humanoid bird creatures to life.

This book has so many twists and turns that you never know what's going to happen next!! Your emotions go in so many different directions by the end that you're not certain whether you liked it or not. What an excellent continuation to this series!!

Excellent Continuation in the Series

I received a free review copy.

I loved the book. If you enjoyed the first one in the series, I definitely recommend this one. I laughed out loud and continued to keep laughing at some parts, such as the troll quest.

I think the narration is great. It is cool how the internal voices of some characters are different than their in-game voices. All of the voices match the characters.

The book continues where the first one left off, and was a good continuation of the story. The world building is very well done and has a ton of LITRPG elements. This story essentially takes place in a tower defense battle. It is also told as individual books by each character, but it works since their voices stay the same. We do get some more story on the ship and what is happening, but this book felt longer than it probably should have. The narration was better this time. I received this book for free for my honest review.

First of all, I'm pretty new to this genre. I used to play D&D as a teen and into my twenties, but I never got into online rpgs. After loving Ready Player One, I decided to venture into this previously weird genre and see what it had to offer. This series is so much fun! I love hearing the characters stats and how they are affected by what is going on first-person in the game. At first, I was a little put off by a female narrator, because Jonah was a dude, but she's awesome! Her voice for Popper is so memorable, I can still hear it in my head. And dont get me started about Alice. Dream pet! Loved it!