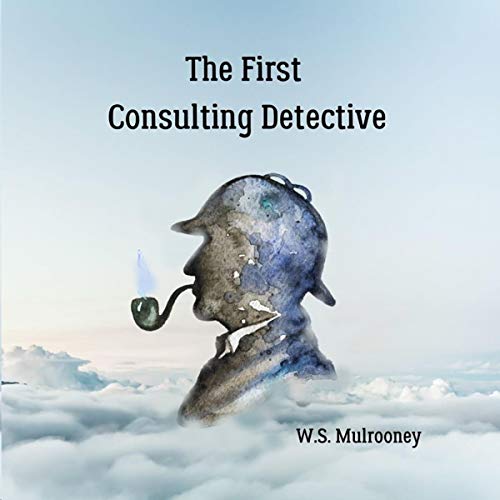 By: W.S. Mulrooney
Narrated by: Jason Markiewitz
Try for £0.00

We join Holmes and Watson in three short cases.

"The Silence of Sherlock Holmes" has both Holmes and Watson battle murder in a library, but when Holmes becomes a critical patient, can Watson rise to save the day?

"He Who Would Be Holmes" reveals the capers of their northern counterparts. The impersonators have flair and panache, but not the ability to solve cases quite as well as those who occupy of 221b Baker Street. Holmes is ex circus and Watson may have only seen one doctor in his life. When an American woman turns up promising retirement money, the pair can’t resist.

"The Mystery of 221b Bacon Street" - The real Holmes and Watson track a blackmailer to a property with a name similar to their own....

What listeners say about The First Consulting Detective

This is perfect for a rainy day or a lazy afternoon as they are read well and easy to listen to and understand.

3 fun short stories in this book. I enjoyed trying to guess what was to come.
This was the perfect length to sit and enjoy in an evening.
I love Sherlock and this did not disappoint

I enjoyed these stories which walked the line between parody and pastiche. They were also of an appropriate length to be listened to in breaks from work, with each story not being more than half-an-hour. I was initially put off by the American narrator, but soon got over this (save his attempt at a Scottish Mrs. Hudson). The solutions to each story were relatively obvious but this did not detract from the stories, and neither did the reuse of some Canonical strategems to solve the problems.

Disclaimer: This Audiobook was provided free of charge y the author, narrator, and/or publisher in exchange for a non-bias, honest review.

A compilation of Sherlock Holmes stories in the traditional vein. Enjoyable book. The writing is good as is the narration. I recommend this book very much!

This book is a classic rendition of traditional Holmes and Watson. The author did well to craft a three-story arc and did a great job capturing the wit of Holmes with the exasperation (at times) of Watson. I really enjoyed the humor in the second story and the way Stan's character was voiced was really entertaining! Markiewitz's narration was very well done and the accents were good/distinct for each character. It's hard to go wrong with Sherlock Holmes! Recommended listen for sure.

A collection of short stories

Despite its short length, this book contains three distinct short stories. All of them are set in the traditional Sherlock Holmes universe and contain familiar characters. As always they are narrated by Dr Watson (mostly).

However, I was left disappointed by the stories. In non of them did I get that feeling of following along wondering about the solution. I didn’t get to that point where the solution is explained and I think brilliant! Maybe I just missed the clues, but to some extent I think the combination of writing style and perspective just didn’t quite work to build the mystery.

On the other hand, they were enjoyable peeks into potential scenarios. It’s always nice to visit in with well loved characters... and they were are well portrayed and in character.

I received this audiobook for free in exchange for a review

Three enjoyable Sherlock Holmes stories and a 2 minute letter from Jim. Jason Markiewitz did a good job narrating. I received this audiobook for free in a promotion and this is my voluntary review.

Holmes and Watson at their best

The First Consulting Detective is a very short collection of three tales involving Sherlock Holmes and his sidekick, Dr. Watson. The three stories are well planned, with character development brilliantly executed to capture both the intelligence and personality of both Sherlock and Watson.
Well written, the author, W.S. Mulrooney provides suspense, mystery, and plot twists that amuse and keep the listener focused. The plot twists were well executed. Although very brief, the audiobook was entertaining and fresh. I would have loved the book to be longer.
The narrator, Jason Markiewitz gave an excellent performance providing proper active attributions and accents to each character. His ability to assume the roles of both Holmes and Watson were flawless. I enjoyed his voice and performance.
There were no issues with the quality or production of this audiobook.
Disclaimer: This Audiobook was provided free of charge by the author, narrator, and/or publisher in exchange for a non-bias, honest review.

If ever I had my life so concisely together!

In the era where we are visually spoonfed entertainment I would much rather read (or be read) a clever book of intrigue! Hearing new tales of the brilliant detective, Sherlock Holmes, really helps my mind focus on solving a crime rather than just doing household chores as I listen to my audiobooks. I find the voice and animation of the narrator, Jason Markiewitz, to be extremely pleasant and he continues to move the pace of these short stories along in good speed while allowing the listener to take the author's cleverness to understanding.

I appreciate the brevity of this collection, as it was something I could begin and finish the same day--what a great start to the new year!

A good listen while you've got some time on the road. I'm usually more of a science fiction/fantasy kind of guy vice the detective story genre but I have to say I enjoyed not just the story but the subtle and sometimes not so subtle humor throughout. At just over 90 minutes, the author does a good job of keeping the story flowing and the character voices of the narrator serve well to illustrate the scenes in the imagination.