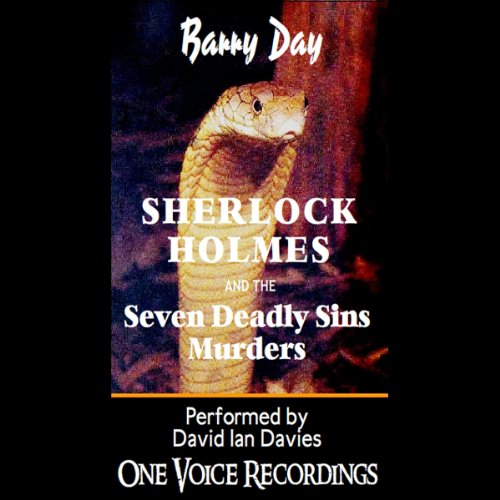 The members of a collegiate club at Oxford jokingly called themselves The Seven Sinners, but 30 years later, despite having grown up to be respectable citizens, they are being murdered, each according to the manner of his particular "sin". Sherlock Holmes' brother Mycroft is one of the targets, and Holmes must race against time to find the perpetrator in this pastiche by Barry Day. Narrator David Ian Davies flexes his vocal skills to great effect, providing impeccable accents for each character. His Holmes is piercing and sharp, more scholarly than cocky, and Watson is given a charming rasp. This exciting audiobook is a treat especially for fans wishing for more Sherlock Holmes stories.

At Oxford they jokingly called themselves The Seven Sinners. Now, 30 years later, they are being murdered - each in the manner of his particular 'sin'. Who is doing it and what is the connection with the twin serpents, the mysterious Emerald Lady and the holy Book of Kor? Holmes and Watson -with the aid of their new friend, Professor Challenger - must race against time and the killer...before one of the victims becomes his brother, Mycroft.
©2002 Barry Day (P)2006 One Voice Recordings

If you love Sherlock, you will enjoy this

The reader is absolutely wonderful. The story is over the top, just like Sir Arthur Conan Doyle was. A very Victorian feel to the plot and the characters. Highly entertaining.

Not sure who would enjoy this. I purchased because l like Sherlock the original but this wasn't even close. The narration wasn't interesting nor was the story. Didn't go past the first 15 minutes.