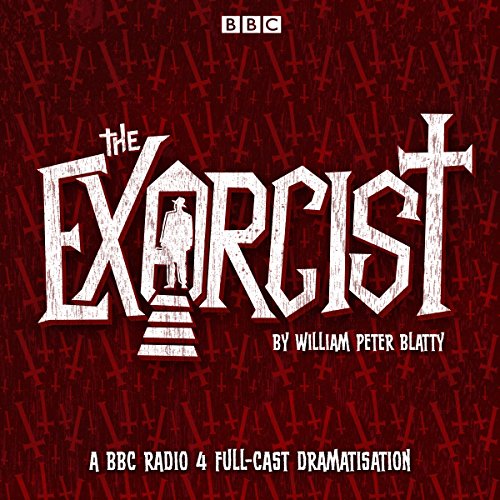 Summoned to a case of apparent possession, Father Karras is at first sceptical then horrified. The victim - a 12-year-old girl named Regan - seems to be controlled by a malignant supernatural force that makes her swear, blaspheme, scream in agony and perform appalling acts.

Attempting to find a rational explanation for the girl’s behaviour, Karras tries to talk to Regan only to find himself locking horns with the demon inside her head. Its many voices mock him, tormenting him with his weakness, doubts and buried guilt.

With his faith in God and humanity tested to the limit, Karras turns to the ultimate solution: exorcism....

The film version of The Exorcist is widely considered to be one of the most terrifying movies ever made. This new, full-cast radio drama is just as chilling, suspenseful and shocking while also retaining the depth and psychological complexity of Blatty’s original novel.

Adapted by Sony Award-winning dramatist Robert Forrest, it stars Robert Glenister as Karras, Alexandra Mathie as the Demon and Ian McDiarmid as Merrin.

"When a radio play is this good, the devil really is in the details." ( Radio Times)

What listeners say about The Exorcist

A good attempt at complex material

This is a good production but misses a lot of the complexity of either the book (admittedly read probably 30 years ago) or the film - all the narrative description and visual cues were omitted which made it a bit difficult at times to know what was going on - but it was a solid performance by all concerned and a more than decent radio play!

Not a patch on the source

I really struggled to get through this. Most of the tension from the original book was lost in this version, although the voice acting was great. Apart from the demon. Nowhere near sinister or otherworldly enough.

I would give this a miss and stick to the Blatty version.

the negative reviews are wrong. this isnt perfect but it's a well made dramatization. it was creepy and interesting to listen to a horror based audio drama like this. I personally didn't find it scary at all but I didn't think the Exorcist movie was scary either.

the negative reviews complain about how it's hard to follow. if you pay attention it's really easy to understand what's going on. they also complain about the lack of a narrator describing everything. these negative reviewers don't seem to understand the difference between an audio book and an audio drama. I blame audible for this since they don't separate them into categories.

the acting was all mostly solid. the actress playing the demon while good didn't sound demonic. I kept hoping as the story progressed that the production team would alter her voice and make it deeper or something. they didn't.

the plot is a little different from the movie. I'm assuming that's because this is based on the book. I was dissapointed with the lack of focus on Father Karras' crisis of faith. you can tell he's struggling but it's not focused on. that's too bad cause from my understanding that was in the book (it's clearly in the movie) and it's what made the story so effective.

I hope the BBC does more horror audio dramas. I wish audible would make some.

The added scenes, of the demon using the dead director's voice, and other little additions give it a nice touch, though they could've done better.
The stand out for me is Robert Glinester as Karras, excellent American accent. Ian what'shisname as Merrin is also good, though he only appears in a few scenes.

NOTE: this is not a traditional audiobook, as the bulk of Audible’s customers will be expecting. Rather, this is a full-cast audio drama produced by BBC Radio 4, much in the way audio programs were widely recorded for radio before the widespread adoption of television. This style of entertainment has never gone out of style in the UK, and interested listeners are encouraged to explore more of the BBC’s catalog of new & archival radio dramas/comedies/documentaries & more either at the BBC Sounds website, or in the iPlayer Radio app on Android/iOS.

REVIEW: Despite having read Blatty’s novel & seen the Friedkin film countless times, I was very pleasantly surprised by how effective this radio production would be. It’s noticeably different from the structure of both the book and movie, which for this listener meant I was treated to a fresh perspective on a very familiar story. Some of the dialect work is sloppy (common in these UK produced radio programs) but once you let your ear adjust you’ll find a tight 2 hours/so of top-notch voice acting in a cleverly adapted soundscape to fully set each scene. It’s an interesting choice to have only one actress voice both Regan and the demon, but it works SO effectively & renders certain exchanges even more intense than their film counterparts.

This will certainly not replace either the original novel/movie for me, but I’ll be pleased to add it to my regular Spooky Season rotation for some aural chills.

On the fence? Try it with a credit — if it’s not for you, just exchange it for another title. :-) But I think it’s worth a credit if not at least the regular retail price.

This is a well made presentation. I love it, especially Karris's voice. I wish they would do this for Legion.

read another version, this One is horrible

the screenplay is nothing but confusing and annoying to the listener. No real descriptions are provided and the characters all seem flat.

i I thought this was the original Exorcist bookcon does not comprar to the original book dont wasit your time or money.