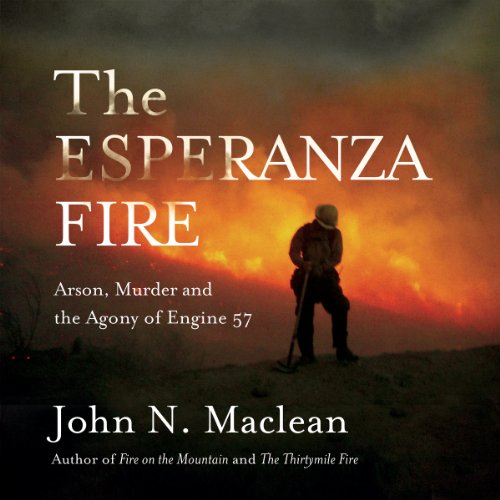 The Esperanza Fire started October 26, 2006, in the San Jacinto Mountains above the Banning Pass near Cabazon, California. It destroyed 41,000 acres and dozens of homes and cost the taxpayers $16 million dollars. But by far the highest costs of the conflagration were the lives of the five-man crew of Engine 57, the first engine crew ever killed fighting a wildland blaze. Fire and superheated gases had erupted in a freak "area ignition," sending flames racing across three-quarters of a mile in mere seconds, engulfing the crew and the house they were defending.

The deadly blaze was quickly determined to be no accident. Within a week, serial arsonist Raymond Lee Oyler was arrested and charged with almost two dozen counts of arson - and five counts of first degree murder. The Esperanza Fire recounts with drama and precision the gripping details of the fire and of Oyler's precedent-shattering trial and its stunning conclusion.

John Maclean spent more than five years researching the Esperanza Fire and covering the trial of Raymond Oyler. The result is a thrilling, moment-to-moment insider's chronicle of that devastating and tragic inferno and the pursuit, capture, and prosecution of the man who intentionally set it.

"Maclean is a fine storyteller...he writes a chiseled prose that does justice to the action." ( The Washington Post)
"Poetic and impeccably reported." ( Wildfire magazine)
"It reads like a taut murder mystery, a whodunit novel you can’t put down." ( The Forestry Source)

Read the "book reviews" on Amazon before judging.

I live on "The Hill" which is what the locals call the mountain-top communities where this horrible fire occurred. This was a terrible time in our shared history and only now, 12 years later, do I feel the knot of pain, anger, and grief letting up the briefest amount. Going off "The Hill on the Banning side" you can still see dead trees and slowly recovering scars from the fire...as well as the site where the firefighters lost their lives. It's hard not to allow the hatred to return. So that's what you need to know about me. Please read more below regarding the book itself.

John Maclean has written a well researched and yet compassionate book abut a tough topic. You don't need to be affiliated with the fire community to understand and be pulled into this book. I was terribly disappointed to see the poor review given by another Audible client and encourage you to click on "Amazon reviews" before passing this book by. The reviews there are better than I could write and the sheer number of positive reviews will give you a better idea of the value of Maclean's work.

What would have made The Esperanza Fire better?

What could John N. Maclean have done to make this a more enjoyable book for you?

learn how to write a book

If you could play editor, what scene or scenes would you have cut from The Esperanza Fire?

all of the useless information

this is the only book that I have skipped whole chapters because it's so boring, if you are driving like I was be careful that you don't fall assleep

0 of 8 people found this review helpful