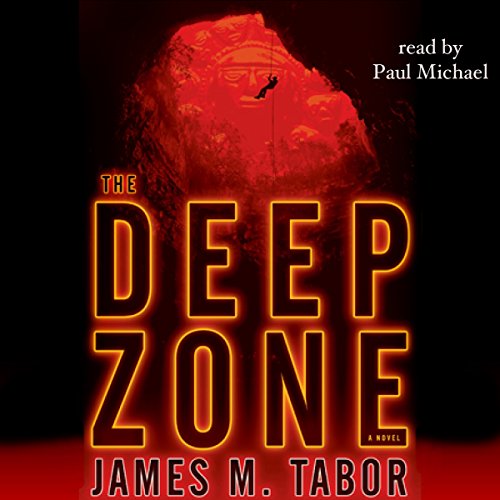 In this gripping debut thriller from James M. Tabor, a brilliant and beautiful scientist and a mysterious special ops soldier must lead a team deep into the Earth on a desperate hunt for the cure to a deadly epidemic.

When she was unjustly fired from a clandestine government laboratory, microbiologist Hallie Leland swore she would never look back. But she can’t ignore an urgent summons from the White House to reenter the realm of cutting-edge science and dangerous secrets.

“Potentially the worst threat since Pearl Harbor” is how the president describes a mysterious epidemic killing American soldiers in Afghanistan - and now poised for outbreak in the States and beyond. Millions will die unless Hallie and a hastily mobilized team can recover the ultrarare organism needed to create a new antibiotic. The good news is that Hallie knows more about the organism than anyone else on the planet. The bad news is that it can be found only at the bottom of Earth’s deepest cave.

Hallie’s team is capable - especially the mysterious Wil Bowman, who knows as much about high-tech weaponry as he does about microbiology - but the challenge appears insurmountable. Before even reaching the supercave, they must traverse a forbidding Mexican jungle populated by warring cartels, Federales, and murderous locals. Only then can they confront the cave’s flooded tunnels, lakes of acid, bottomless chasms, and mind-warping blackness. But the deadliest enemies are hiding in plain sight: a powerful traitor high in the Washington ranks and a cunning assassin deep underground, determined to turn Hallie’s mission into a journey of no return.

The award-winning and best-selling author of two nonfiction books about adventure and exploration, James M. Tabor now plunges readers into the harrowing subterranean world of supercaves - and even deeper, into a race-with-the-devil thriller that pits one woman against a lethal epidemic and a murderous conspiracy.

“A smart, informative debut thriller with a pair of assertive heroines that draws us into the strange wonders of inner space.” ( Kirkus Reviews)
“Ever since Michael Crichton passed, I have been looking for an author capable of crafting such creative, intelligent, pulse-pounding tales. Well, the search is over. The Deep Zone is an absolutely phenomenal read - The Andromeda Strain for the 21st Century. Ladies and gentlemen, meet James M. Tabor, the new Michael Crichton.” (Brad Thor, number-one New York Times Best-selling Author of Full Black)
“Deep-earth adventure, scintillating science, and cutthroat intrigue collide with thrilling results in James M. Tabor’s The Deep Zone. Wildly imaginative but grounded in today’s headlines, the story left me breathless and awed. Truly impressive.” (James Rollins, New York Times bestselling author of The Devil Colony)

What listeners say about The Deep Zone

What did you love best about The Deep Zone?

I listen to many audiobooks of different genres and rarely does one snag me so that I have a terrible time turning it off while I do neccessary tasks. I'm afraid I was so caught up in this one because of the characters, the science, and the converging vectors of the story that I was probably a little rude to those who were trying to engage me in conversation! More!

Keep the good stories coming based on real science and real military scenarios. Its a great combination when paced just right.

The book was captivating and I found myself rooting for the good guys.
However, I found it a little difficult to connect with the characters. I couldn't decide if it was the way the book was written or the narrator. However, I really liked this narrator -- great voice and changed his voice for the different characters. I just wasn't able to really connect.
Surprisingly I found the book a little predictable, but not in an irritating way.
I would listen to this author and narrator again, but maybe not as my first choice.

The Deep Zone is a well written book that paints a very complete and interesting story but it’s slow and boring. Throughout the story there is plenty of mystery about who’s on whose side and what will happen next but that shouldn’t be confused with thrilling. For about 70% of the book (bad) things happen to the characters but for the most part they’re all away from the readers point of view so we don’t get any play by play, we’re only left wondering what happened. Then 10% of the book is pretty action packed. Then the last 20% is wrapping up with no action. Overall an interesting read but if you’re looking for a thrilling time that pulls you along you might want to skip this one.

The narration was wonderful. Paul Michael does a great job with this one as he has in the past with other books.

Would you try another book from James M. Tabor and/or Paul Michael?

Yes I would try another book by either of these authors.

What other book might you compare The Deep Zone to and why?

Can't think of a book, but there was a movie. Very closely resembling the premise.

What does Paul Michael bring to the story that you wouldn’t experience if you just read the book?

The voice stress he used was very helpful in making the urgency come through.

Do you think The Deep Zone needs a follow-up book? Why or why not?

It could have a follow -up if it was drone right. I 'm generally not fond of foloe -ups, but this could be an exception

Loved it! Better than Michael Crichton!

It's too bad that this is James M. Tabor's debut novel. After I listened to this book, I was hoping to find more books by this author, but there are none yet. Will definitely look forward to future books by James M. Tabor.

There was a lot of things in this book that I had little knowledge of, but he does a good job, at making the reader/listener understand the science, and technologies.

If you like me, think that the narrator plays an important roll, in the the portrayal of the novel, Paul Michael does a great job in The Deep Zone!

I found this to be a basic mystery novel Almost all of the book takes place in a maze of underground caves. There really isn't anything very new or different than other cave novels. I am clustrafobic and found some parts very frightening/ It also has the spirits one would expect. If you like this kind of book you will really enjoy this one. If you are like me, it's a good way to fill some time.

The narrator was fine, but there were too many people in the book that backstabbed others for my taste, and the whole part in the luxury boat seemed like a completely different story.