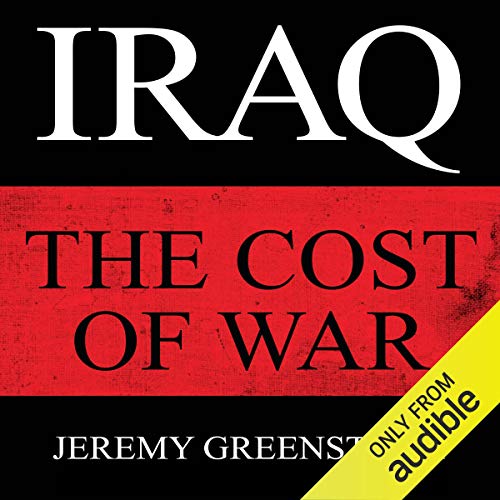 The Cost of War

By: Sir Jeremy Greenstock
Narrated by: Peter Noble
Try for £0.00

Tony Blair's decision to back George W. Bush in his attack on Iraq will go down as a defining moment for Blair - and for Britain. As Ambassador to the UN, Sir Jeremy Greenstock was centre stage in the dramatic months leading up to the Iraq War. After the war he was Special Envoy for Iraq, the UK's highest authority on the ground, and he worked side by side with Paul Bremer, the US administrator of the Coalition Provisional Authority, in Baghdad and saw firsthand the impact of the divisive turf wars back in Washington. He kept a diary of what he witnessed in Iraq as the security situation deteriorated and has spoken remarkably candidly about the US-led administration. This extraordinary book is a record of what he saw.

Greenstock writes openly about US-UK relations and takes his listeners behind closed doors in the tumultuous days leading up to the Iraq War. Through his eyes we see the actions and interactions of key players in New York, Washington, London, Paris and the Middle East. To what extent was the Bush administration determined to attack Iraq come what may? What promise did Blair extract in exchange for backing Bush? How important was Israel to American calculations? Was the war legal? What effect is it continuing to have on Britain's long-term relations with America and Europe? No one is better positioned to set the story of Britain's decision to go to war in its international context.

Held back from publication when originally written in 2005, and now revised with a new foreword and epilogue following the publication of the Chilcot Report, Iraq: The Cost of War is a dramatic and groundbreaking blow-by-blow account of one of the most pivotal and controversial conflicts in recent world history.

What listeners say about The Cost of War

An interesting look into the political struggles behind the scenes, told very well by someone who not only witnessed but also influenced events in Iraq at that dangerous time.

Iraq war with a British perspective

Great book that bring me to better understand international politics and the role of the UN, narrated from a British point of view, it is nice to see the war from the Brits perspective.

Would you consider the audio edition of The Cost of War to be better than the print version?

Jeremy Greenstock comes across as a very smart, very experienced and caring man.

What does Peter Noble bring to the story that you wouldn’t experience if you had only read the book?

Wonderfully read book. Has a voice you could listen to on all books. Very very good indeed.

The start of a bombing campaign in Iraq without a thought to what to do once the US have finished blowing up is shocking.

Wonderful insightful book. I learnt a lot about how the UN works and the level of effort it takes to get things done. The position of the US government and to some degree the UK government is mind-blowing. Idiotic people making awful decisions. The lack of understanding of the region and country defies belief. A very good book indeed.

Interesting background to the Iraq wars, but comes across as partly trying to defend his role and a bit boastful

Dreadful narration of a good book

Very difficult to listen to. Horrible narrator. Such a pity. Could only listen in small doses.