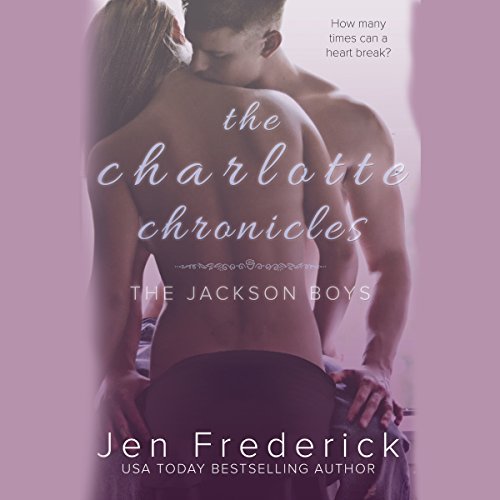 Charlotte and Nathan were supposed to be forever. They grew up together. Their families were intertwined. Charlotte was Nathan's first love. Nathan was Charlotte's first everything. Until they weren't. How do you hold on to the person you know in your heart you are supposed to be with when everything and everyone in the universe is telling you it's over? How many times does a heart break? When is enough enough? How long is forever?

What listeners say about The Charlotte Chronicles

An awesome written piece. Very descriptive and paints the picture of emotion. Bravo to the narrators who bring the pages to life. Thank you!

Loved it; was hard to push pause many times. The narrators "PERFECT," as the author!

How many times does a heart break?

When I first heard Jen was writing Nathan and Charlotte's book, I was excited. What could be better than reading about the off springs of Noah and Bo falling in love?

Jen Frederick decided that while she gave us their story, she would also break their (and our) hearts.

The book is filled with drama and the tension level is high.

When we first meet Nathan and Charlotte they are teenagers having to deal with Charlotte's illness and Nathan's feelings of helplessness and inability to help Charlotte in her battle.

Those two didn't have one moment of grace to celebrate their feelings to one another.
.

I liked Charlotte's spirit. She fought and was so brave from the first page.

Charlotte knew it was time for her and Nathan to continue to the next level in their relationship and did what she could to achieve that.

I loved Nathan and Charlotte's determination to have a relationship despite all the challenges they knew were coming.

I have so many favorite scenes!

Nathan realizing his time with Charlotte is limited and he had to make her his.

The first time they made love was beautifully written. I loved reading about the promise the made one another, a promise they kept for 9 long years.

Thiers was a young love, but the connection between them was deep and true.

I loved the letters Charlotte wrote Nathan. Not many authors use letters as a means to communicate, and there is so little you can say via text and even less emotion via email.
but the letters portrayed Charlotte's emotions, the passing of time and Nathan's lack of response in a heartbreaking way.

I admired Charlotte for holding on as well as her decision stop writing those letters.

On the second part of the book we meet the mature Charlotte and Nathan. We see both the professional and personal sides of their lives.

I loved seeing Nathan fight for Charlotte. He had a lot to prove, and no, the multiple orgasms he gave her weren't enough.

He letters on the other hand, were something else!!

Nathan finding out he was used sexually. He wasn't raped but his body was used without his consent.

Nathan had to come to the realization that what happened to him wasn't his fault. His parents and Charlotte telling him that didn’t help. He had to overcome the shame of being taken advantage of evoked.

Its usually women who we see taken advantage of, and I think Jen wrote that part of the story and Nathans feelings in a superb way.

That event changed his life, and while he became a SEAL and was fearless in battle, he wasn’t fearless in his personal life. It took a certain survivor to make him face the truth of living his life in hiding ,which wasn’t a life worth living.

I loved the way Jen handled the story of Charlotte and Nathan. Not the typical love story between two childhood friends.

The story is full of emotion.

The epilogue was another great piece of the story: the letter Nathan wrote his first born son advising him to be strong and wait to have sex until the right person comes along. Nathan's regret that he didn’t wait for Charlotte, but didn’t have anyone else after her.

A beautiful conclusion to the story.

So Promising But Fell Flat

I have had the Kindle version on my TBR list forever & was excited when I discovered the Audible version. Both narrators are new-to-me. It is an okay, but definitely not memorable, performance. The premise sounded great but the story dragged on and the idea that they could avoid each other or knowing anything about each other for years when their families are attached at the hip is implausible. I'm a big Jen Frederick fan so it is hard not to give a rave review. If you aren't familiar with her work, don't start here. Listen to "The Woodlands" series first to appreciate the families' connections.

The entire first half of this book is difficult to listen to. I don't think a 15 and 17 year olds sexual encounters should be described this in depth. I fast forwarded through most of the situations. The story was great. The outcome was definitely not what I was expecting. Narrators were great. Couldn't give 5 stars because of the underage sexual content.

A TRAGIC, PAIN-FILLED YET ROMANTIC LISTEN

This story starts of with 15 yr old Charlotte going into surgery for a brain tumour and amongst the frantic people in the waiting room are her two best friends brothers Nathan and Nick. But it's 17 Nathan that holds the key to Charlotte's heart and, despite all the other girls he's been with, Nathan realises his heart belongs to Charlotte too. The brothers play a major supporting role as she undergoes chemotherapy, the loss of her hair and all that Cancer makes a person, and their loved ones, endure. However, a bitch and nasty teenage pranks forces painful decisions and a heartbreaking split that will have years of love letters that go unanswered, heartache, turmoil, wasted years and bitter regrets. So a major part of this book was set during their teenage years.

But then, 9 years later, they finally get a second chance to clear things up, apologies, begging, tentative steps, forgiveness and then the power and rewards of unconditional love..... until one heartbreaking day managed to throw in a twist that temporarily knocked them off course from their road to a blissful HEA. And they're faced with the realization that, once again, Charlotte's got a battle on her hands but this time will Nathan be by her side and for how long?

This turned out to be quite a different story than what I was expecting.... yes, it had its deep parts, heartbreaking parts, very romantic parts and lots of hot 'n sexy parts too but it had its very depressing parts as the characters (and the listener) go from grabbing hold of emotional highs and then sinking in regrets, longings and despair. There were unrealistic parts, annoying parts, characters that passed through the story that you suddenly never heard from again and the story, overall, didn't give me that WOW factor. But, there was a sweet 'n sexy love story that defied so much drama and angst which had me swinging back and forth between giving it 3 and 4 stars.

Worth a credit? Dual POV's, great male narrator but didn't much like Jennifer Mack's male Hero's voice and the story, which lingered on the teenage years, was enjoyable yet depressing and also heartbreaking yet beautiful. Would I listen to it again?... NO, would I recommend it?... probably not and yet I thought it was a creditworthy listen (huh, go figure!!).