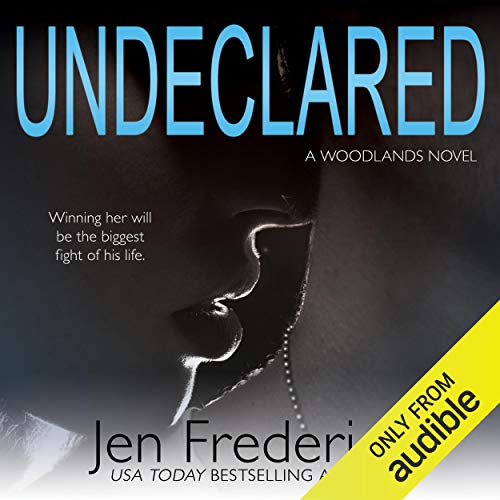 By: Jen Frederick
Narrated by: Connor Kelly-Eiding,Andrew Eiden
Try for £0.00

For four years, Grace Sullivan wrote to a Marine she never met, and fell in love. But when his deployment ended, so did the letters. Ever since that day, Grace has been coasting, academically and emotionally. The one thing she's decided? No way is Noah Jackson - or any man - ever going to break her heart again.

Noah has always known exactly what he wants out of life. Success. Stability. Control. That's why he joined the Marines, and that's why he's fighting his way - literally - through college. Now that he's got the rest of his life on track, he has one last conquest: Grace Sullivan. But since he was the one who stopped writing, he knows that winning her back will be his biggest battle yet.

" Undeclared was genuinely a lovely debut book. I was craving something comforting when I started reading it, and what I got was a big fluffy pillow of a sweet love story..." (Nocturnal Book Reviews)
"Noah Jackson was perfect in every way! He was compassionate, considerate, and sexy as hell! His old school values mixed with his slight debauchery made him a perfect alpha male..." (Craves the Angst)
"I loved this book and can't wait to read the next installment in the Woodlands series, the characters, storyline, and gushing romance were all wonderfully written..." (Obsession with Books)

What listeners say about Undeclared

What made the experience of listening to Undeclared the most enjoyable?

Dual narration and a great story brought to life by these two amazing performers.

What was one of the most memorable moments of Undeclared?

The set-up: of Noah being on campus and first approaching Grace. The budding reconnection and seeing their relationship evolve.

Which character – as performed by Connor Kelly-Eiding and Andrew Eiden – was your favorite?

Tough decision, because I thought both did a fantastic job. I really felt like I connected with characters because Connor and Andrew brought them to life...Noah made even more swoon-worthy than when I just read the book the first time. And Grace embracing her gift of photography and giving Noah that chance to explain.

Quick wit of Grace, Noah and even Bo had me cracking a smile more often than not. A bit emotional when Noah left Grace for Las Vegas, but overall happy during the story and rooting them towards their HEA.

Jen Frederick is a fabulous writer and I've enjoyed all her books.

I could not really connect with the characters in this story, it just seemed kind of drawn out without the real emotions of the characters coming through. The storyline is actually a good one, it just fell short in my opinion. The narration was well done, except I didn't like the female voice very much.

This first book in the Woodlands series was charming and engaging. I loved the synopsis of anonymous pen-pals losing touch then finding their way back to each other. It was everything I expected and more. I loved Grace and Noah together. They were well developed, honest and organic. The situations they found themselves in were funny at times and heartbreaking at others. I found the flow and progression of their relationship was well paced and believable. I also really enjoyed Connor Kelly-Eiding, and Andrew Eiden's narration. They were really wonderful at setting the mood and allowing us to experience the fun and emotional angst of college life. I think this is a great start to this series and I am excited to listen to the rest of the books!

I read this book awhile ago, but since it came out on audiobook I had to listen to it again. The narrators on this one were great- Noah's voice was exceptional the female narrator was good but I fell in love with Noah all over again. This was done with Dual narration and the story was brought to life.

This is book 1 of the Woodlands Series- and this is Noah and Grace's story. Noah is a ex Marie- and Grace is a young college student who became pen pals with Noah while in high school- writing to the troops over seas. 4 years the two become 1- the letters that helped Noah get thru his time overseas- even thou Noah was 4 years older than him, he fell in love with Grace as Grace did with him. 2 years ago, Noah decided it was only right to friend zone Grace, she came from a rich family and he did not- he couldn't meet her with knowledge he couldn't properly provide her with a life that she was accustomed to.

After a long heartbreak Grace finally realizes that Noah is attending her college, and she doesn't know why. The two become friends, and he fights for her to become his.

The two had some trust issues- well mainly Grace, and Noah was nothing but a strong leading man in the story. Ex-Marine, up and coming UFC fighter, he fights for what he wants even thou Grace doesn't know it. He takes what he wants, while she's indecisive. He gives her a life that she thinks she doesn't deserve.

Over all this was cute story, any story with a love sick puppy alpha male gets me every time, along with Jen Frederick being one of my favorite writers, Connor Kelly-Eiding and Andrew Eiden did well on portraying the story how it was meant to be.

Another great story by Jen

This was my first foray into listening to a book. I had already read the book and loved it, being a fan of Jen's writing. I was totally drawn in by the characters of Noah and Grace and I wanted to know what happened with them. I loved the way Jen interspersed their letters back and forth to each other throughout the book.

I enjoyed the 2 people reading the book, but sometimes it seemed hard to get "into the heads of the other characters" from the book, so I think I would prefer to re-read this to get all the different nuances of Lana, Finn, Josh and the rest of the cast of characters we met. I loved this story and I am looking forward to the next installment in the series, to get Bo's story and I hope we get to see more of the other characters as well. I would definitely recommend this book.

Have you listened to any of Connor Kelly-Eiding and Andrew Eiden ’s other performances before? How does this one compare?

No, this was my first audible book.

Yes, but due to the length of the book, I had to break it up into a couple of different pieces.

If you could sum up Undeclared in three words, what would they be?

If i could sum up UNDECLARED in three words, they would be LOVE, TOUCHING, and BEAUTIFUL.

Which character – as performed by Connor Kelly-Eiding and Andrew Eiden – was your favorite?

they were both good!!

Read the book and loved it... and just listening the audio book reminds me why I love this book. Makes me miss the characters Noah and Grace.

This was a sweet story and an easy read. I love both main characters, but there wasn’t depth.

It's a great story, but the female narrator is too bitchy. Her voice is pissed off throughout the book and I almost stopped the book after only a few chapters. I did keep reading because I liked the storyline, but I was unhappy the entire time she spoke.

The narration was really good. I like hearing both male and female voices and POVs. Andrew Eiden is one of my favorite male narrators.

The story is about Grace and Noah. Grace wrote letters to Noah while he was deployed. They got to know each other and feelings developed. However, Noah’s last letter lets Grace know that he doesn’t see her romantically. Grace is heartbroken. Two years later Noah shows up at college with Grace. There relationship is sweet with some misunderstandings, but low angst. Recommend.

grace could be quite anyoing at times. but I liked it. Noah was to die for though.