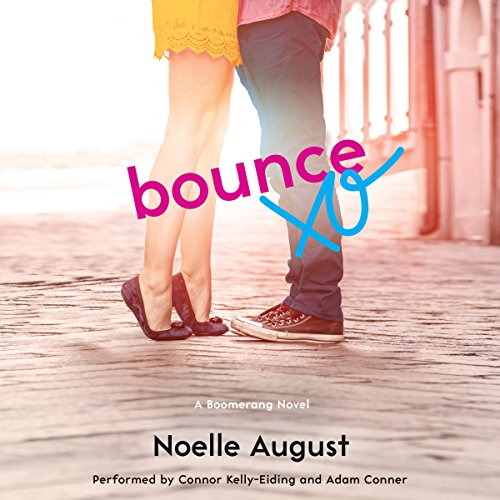 By: Noelle August
Narrated by: Connor Kelly-Eiding,Adam Conner
Try for £0.00

Following in the best-selling tradition of Molly McAdams and J. Lynn, this final chapter in the fun and steamy New Adult trilogy by Noelle August (authors Veronica Rossi and Lorin Oberweger) features two aspiring musicians who must choose between their careers - and their sizzling attraction for each other.

Playing the occasional club gig just isn't cutting it for 22-year-old cellist Skyler Canby, who's trying to support herself and her mother back home in Kentucky. Persuaded by her best friend, Beth, to accompany her on an audition for the first feature film launched by Blackwood Entertainment, she figures why not? Beth's a shoo-in for the lead, but maybe Skyler's newly dyed pink hair will help her stand out enough to score a small speaking part.

Never in her wildest dreams does Skyler imagine she'll land the lead role or that she'll have her shoes knocked off her feet by the kiss her audition partner, Grey Blackwood, plants on her - a kiss that feels very real and not at all acted.

After throwing a party that causes thousands of dollars of damage to his older brother's home, reckless musician Grey Blackwood gets roped into working off his debt on the set of his CEO brother's newest project. Grey spends his days fetching coffee and doing odd jobs around the studio, but he lives for nights when he performs with his band. He knows if he can stay focused, success as a singer is just around the corner. But that's tough with a distracting, pink-haired girl occupying his every waking thought.

Skyler and Grey have every reason to resist each other. But like a song neither of them can get out of their minds, they have no choice but to go where the music takes them.

What listeners say about Bounce

Outstanding conclusion of the triology

This last book in the trilogy maintained the standard of excellence set by the first two. This novel focuses on Gray, Adam's younger brother. In book two, August setup issues that got resolved in this novel. What I really appreciated in this series is each book has its own unique plot -- they are not formulaic. Gray, aspiring musician, meets Skye, aspiring cellist and actress. Most of the novel is about them finding themselves and each other. Each has their own internal struggles and breakthroughs. This is not a steamy romance novel.

This is a sweet and heartfelt story line that will appear to romance readers. Each chapter alternates male-female perspective. I like that style and works well. The female narration is very good, but the male voice doesn't work for me. That's why I gave it low marks in performance. By the end of the novel you are used to it.

Very enjoyable addition to a fun series. I'll read anything by Noelle August. She doesn't disappoint.