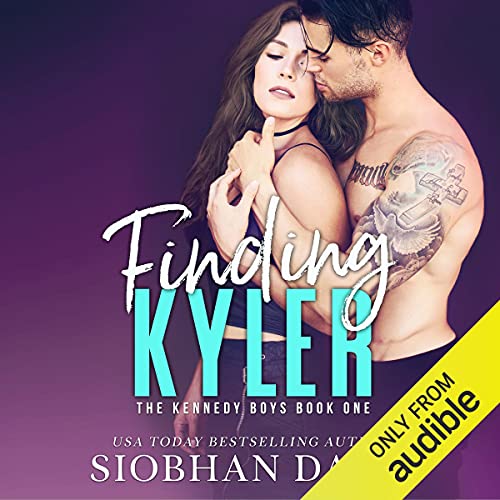 By: Siobhan Davis
Narrated by: Sinead Collins
Try for £0.00

Two fractured hearts and a forbidden love they can't deny.

You shouldn't want what you can't have....

Faye Donovan has lost everything. After her parents' tragic death, she's whisked away from her home in Ireland when an unknown uncle surfaces as her new guardian. Dropped smack-dab into the all-American dream, Faye should feel grateful. Except living with her wealthy uncle, his fashion-empire-owning wife, and their seven screwed-up sons is quickly turning into a nightmare - especially when certain inappropriate feelings arise. Kyler Kennedy makes her head hurt and her heart race, but he's her cousin. He's off limits. And he's not exactly welcoming - Kyler is ignorant, moody, and downright cruel at times - but Faye sees behind the mask he wears, recognizing a kindred spirit.

Kyler has sworn off girls, yet Faye gets under his skin. The more he pushes her away, the more he's drawn to her, but acting on those feelings risks a crap-ton of prejudice, and any whiff of scandal could damage the precious Kennedy brand. Concealing their feelings seems like the only choice.

But when everyone has something to hide, a secret is a very dangerous thing.

Will I enjoy this book?

Full of scandal, dysfunctional families, teen soap-opera-style angst and drama, secrets and lies, mean girls and catfights, lust and love, book one in the pause-resisting Kennedy Boys series will have you listening way beyond bedtime! Suitable only for listeners aged 17 and older due to mature content and language.

Please note this book contains a forbidden love theme featuring first cousins and a cliff-hanger. It is not a stand-alone listen.

The three Kyler books must be listened to together. Thereafter, every book in the series will focus on a single Kennedy boy and his love interest, and they will be stand-alone titles with an HEA and no cliff-hanger.

"Completely and totally ADDICTIVE!! The Kennedy Boys series has everything I love in romance - crazy hot heroes, smart and authentic heroines, angst mixed with heart...and did I mention the books are HOT?? Siobhan Davis has a fan for life in me!" (Rachel Harris, New York Times and USA Today best-selling author of The Fine Art of Pretending)

What listeners say about Finding Kyler

The narrator ruined this book

Great story I actually purchased the kindle version because I couldn’t stomach the narrator and her terrible accent. When she spoke the male characters it was painful to listen to.

OMG loved this story, audio makes you feel like you are apart of the story at times! Can't wait for the next book!

I think this would be a book to read but I could not make it through the audio. The male characters sounded too feminine.

I really enjoyed this first book in an audiobook series! When the story begins, we meet Fay, who has just lost her parents who were killed by a drunk driver in an accident. Reeling from her loss, she suddenly finds out she has to move to America to live with an uncle she didn’t know she had. To top that, he’s from a wealthy famous family and has seven sons. Upon arriving in America, she’s not met very warmly by any of her new cousins but has no choice but to carry on. There are so many complexities to this story, a touch of taboo and this first book ends on a shocking and unexpected cliffhanger. Normally that would aggravate me, but the next in series has already been released so I’m going straight into it! Narration was pretty good but really needs male voices for all the boys’ characters. Looking forward to seeing what happens next!

Love this author! Such a shame the narrator ruined it . Couldn't finish this book.

Storyline isn’t bad but seems very similar to some other series. Narrators Irish accent is wonderful but that’s where the good ends. She can not do English accents well or male voices at all. What should be rough male Voices end up Sounding like caddy dumb high school girls. The delivery is awful and made the book unable to finish.

The narrator makes this book impossible to listen to

I read the reviews that said the narration was bad but that usually doesn’t bother me so I bought it anyway. I was wrong!!! I’m about half way finished and I’ve had to stop listening and read the print version. It is that bad!!

Power on through the first five chapters and the narration improves.

This story is amazing. I almost gave up listening to this book because the narration was awful in the beginning, but her narration improved, and the twists and turns get really interesting. The characters are well written. Give this book a chance.

Finding Kyler is the first book in The Kennedy Boys series. This book is told from dual POV's from Faye Donovan and Kyler Kennedy.

Faye lost everything when her parents died. She left her home in Ireland to move in with her Uncle. Here she meets her seven cousins, including Kyler.

Her life is turned into a nightmare especially when she starts to have feelings for Kyler. Kyler tries to keep everyone at bay, and has sworn off girls. Yet Faye sees under his motives and still has feelings for him.

They hide their feelings from others around them, because cousins shouldn't be together. Yet secrets have a way of coming out.

The story is pretty good but the audio really took away from it. It was almost annoying to listen to!

I enjoyed the story but it was really hard to get through because of the narrator. Her male voice was really horrible. It made me cringe at times.

What a way to end a book. I kind of had a feeling that was where the story was going but I thought it might be the other way around. Kyler and Faye have undeniable chemistry but with that revelation how will they get their HEA. looking forward to continuing the series.