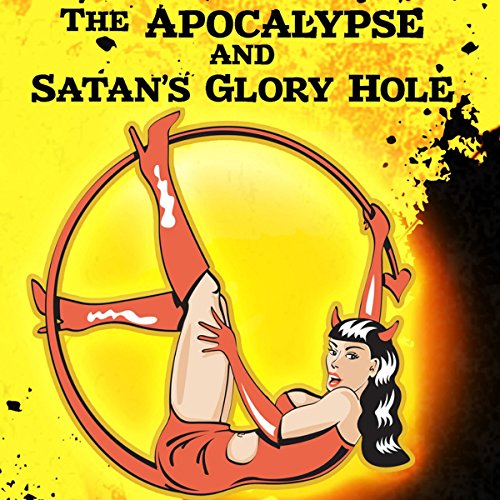 The Apocalypse and Satan's Glory Hole

Armageddon arrived on a weekday, which was really inconvenient for a lot of people, including The Four Horsemen of the Apocalypse. After their appearance on The Kayla Mangrabler talk show, they decided to go their separate ways and cause as much havoc as possible.

Jesus has been stuck at the craps table for three days, sipping vodka and Red Bull, completely missing the end of the world. But he is about to meet up with Death and go on a road trip that will test their resolve and their blood alcohol content.

Meanwhile, an unlikely band of heroes are headed to Las Vegas to fight the Apocalypse. Creepy Chuzz and his one-armed, addict monkey Phil are flying there in an ice cream truck. Chuzz's best friend Leon plans to lend a hand, assuming he can escape the clutches of the insane Father Maniwhore not to mention Pestilence, who has designs on the janitor's bathtub-LSD-addled brain.

Along the way they will encounter bouncing glory hole boxes, militant lesbians, an undead general, a flying demon named Princess Sally, hordes of zombies, and a trio of secret agents hellbent on delivering a Cease and Desist order to Lucifer himself.

They'd better hurry, because the Devil is rising in the desert, and he is hungry to start the Apocalypse that his son could not. But only if he can get it on with his giant floating glory hole.

What listeners say about The Apocalypse and Satan's Glory Hole

This is a raunchy, yet hilarious spin on the end of days. Basically the Author focuses on sex, sex, and a little more sex. But its funny.
The bad about the audio book is that it was a little hard to keep track of the timeline as it jumped around abit. i'm sure it would be easier if you took your time with the written version.
The good; obvious toilet humor, fart jokes, and a mockery of the apocalypse. God is bored, Jesus and Death take a road trip, Famine is a large fat woman that if Rosanne Bar read her part it would have been perfect!!! Just silly non-sense fun. If you listen to the sample and like it you will love the book. If you don't like the sample you will hate the book.

Hilarious Romp for Me- Not For Prudes

I could not drink anything while listening to this because there was great danger of uncontrollable explosive laughter at any given moment during this story. I am not sure why it tickled my funny bone so much since the Apocalypse is a very serious subject, but this cast of characters and the things that happened to them or because of them was like no other story ever encountered in my extensive reading history.

The very names of the characters elicited gales of laughter, especially in the beginning scenes at the Burning Man contest in the Nevada desert. The law enforcement officers present at that, uh, "contest" , personify every redneck cop ever written about or known personally, but still fresh and new. And what they did there....oh, my!

The narrator, Guy Williams, contributed a lot to my sense of hilarity. This was an excellent job of fleshing out characters with voice and tone. Kudos to Mr. Williams on this. I am still wondering how he managed to narrate this without breaking into laughter himself, so he must be a real professional.

This book contains a lot of profanity and sex of all kinds while making a complete fool's game out of the Apocalyse. It is a satirical farce on a grand scale. People in the Bible Belt and those with no sense of humor should probably avoid it. Also not for children under, oh, twenty-something. Otherwise, have fun.

I knew this would be raunchy and dirty, I mean look at the title, and I was totally ok with that. Until I finally understood what kind of raunchy once I got into it. It's absurd perverted characters... A lot of them... For no reason. So if there were one of these characters I wouldn't mind, two I'd even accept, three I'd start scratching my head and wondering what's up with the authors. But all of them? its beyond absurd, it just becomes boringly rediculous. Everyone has a boner, is trying to jack-off, have sex, doing drugs, or wanting give their sperm to Mother Earth. Oh and there's cock-bugs. Yeah I said cock-bugs, cocks with a bunch of legs.
Don't worry, there's some lesbians to round out the mix. They are sex crazed, gun toting, man hating, and ready to kill. So it's not predictable or stereotypical at all.

This just didn't work for me. I can't say it's offensive, because I just don't offend easily. It's tasteless. I don't recommend it.

The other reviews are not a dare!

There are awesomely bad stories, awesomely bad books, awesomely bad dick jokes...this is not one of them. Well, I'll amend that to say the first 45 minutes of it were not the first 45 minutes of one of them. Maybe it got better. I couldn't bear to listen to any more. The other reviews I read called it this horrible piece of trash filled with nothing but dick & fart jokes as if written by an elementary school child who just learned the words. Frankly, I consider parts of my sense of humor to be pretty juvenile, I do normally laugh at that type of stuff & I'm often the first to append "that's what she said" or "you mom" to otherwise innocent statements. I figured this book was low brow humor that the typical reviewer just didn't appreciate like an irreverent goofball like myself.

I'm a long winded guy, I could write a lot about how unintelligently written it is, how poor the "metaphors" he tries to string together come across, how poor the delivery of the homoerotic dick jokes was, how it reads like notes the potty-mouthed 3rd graders get held after class for writing when they learn new words. But I won't. I'll just leave you with this: If you're like me, you love the title, the cover art, and have a sense of humor that appreciates movies like Borat, Old School, or anything Kevin Smith does, you giggle at the office when your manager asks if he can borrow your dongle, and you saw the other reviews of this book as a clear case of intellectuals unable to let themselves go enough to have a good laugh at some low-brow humor. Save yourself the time and money, the other reviews are fair, this is bad. Really really bad. And not in a good bad kind of way. Just bad.

For those who are easily offended. Go read something else. This is funny as shit.

What could Timothy W. Long and Jonathan Moon have done to make this a more enjoyable book for you?

he did fine with the sh*t sandwich he was given

could not stop barfing

Someone recently lobotomised might get some enjoyment from it.

I couldn't even finish the first chapter.

What was most disappointing about Timothy W. Long and Jonathan Moon ’s story?

It fell flat right from the second sentence.

What character would you cut from The Apocalypse and Satan's Glory Hole?

the worst audio I've every heard

What disappointed you about The Apocalypse and Satan's Glory Hole?

It really was bad....the story

Would you ever listen to anything by Timothy W. Long and Jonathan Moon again?

The narrator did his best. Kudos for him.