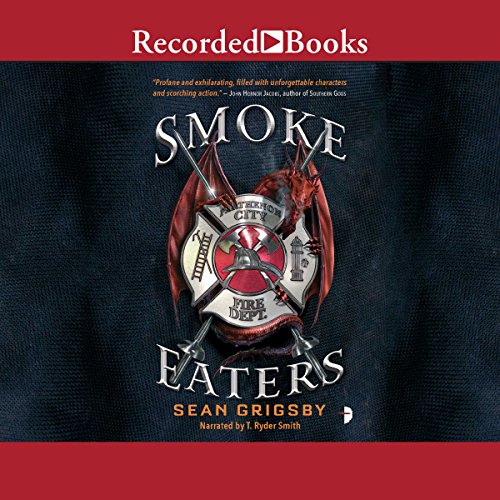 When dragons rise from the earth, firefighters are humanity's last line of defense, in this wild near-future fantasy.

Firefighter Cole Brannigan is on the verge of retirement after 30 years on the job, and a decade fighting dragons. But during his final fire call, he discovers he's immune to dragon smoke. It's such a rare power that he's immediately conscripted into the elite dragon-fighting force known as the Smoke Eaters. Retirement cancelled, Brannigan is re-assigned as a lowly rookie, chafing under his superiors. So when he discovers a plot to take over the city's government, he takes matters into his own hands. With hundreds of innocent civilians in the crosshairs, it's up to Brannigan and his fellow Smoke Eaters to repel the dragon menace.

What listeners say about Smoke Eaters

Fire fighters versus dragons.
Does that sentence get to you? Does it stir your inner five year old? Good. Then listen to this.

The pacing and sense of escalation was great. It mocks some tropes while grabbing other by both hands and embracing them. The world was strong and was built well - it is an excellent near future.

This is very American. The lead character is a bit of typical, grizzled hero but his sense of humour makes it worth forgiving.

Honestly: it was good fun. It was exactly what I signed up for and made me laugh out loud more than once. If you want something easy going to capture your imagination this is it.

Working EMS for years and being on a volunteer fire department made a really good book even better. Overall the science fiction was still believable which I personally prefer. Witty and humorous! I recommend this book!

I’ve been excited by the prospect of firefighters fighting DRAGONS ever since that word combination hit my feed, back before Grigsby had released his debut. And what a debut. The author is an absolute natural, with the casual ease Stephen King is famous for, along with some upper grade characterization along some very cool futuristic toys, indeed. The dialogue flows like water, the descriptions, while not exactly *crisp* give you a general idea of where the people are at any given moment. And humor. I really loved the humor and overall playfulness in the author’s eye even while telling a story that had some very serious parts. All threads were sewn up nicely, transitions were cool, and so I think many readers, elder teens on up might like this book. Fantasy, sci-fi, urban fantasy readers, probably even horror enthusiasts could enjoy this.
Although if anyone thins their eyes again, it’ll be far too soon. ;)

Now for the narrator, I don’t think I’ve ever heard Smith read before, but now I want to just hear him read all of my books to me. The man studied his material and makes every character (even the Korean-speaking dog) come straight to life. Honestly one of the best narrators I’ve had the pleasure of hearing yet. The action scenes are read rabbit-fast, just as they happen, while the transitional scenes can be soft and languid. I’ve always gotten far better enjoyment from a book if it is read with *feeling* and this book has ALL the feels.

Interesting story from the first few lines. It built up gradually to its climatic conclusion.

Such a refreshingly different story. I loved every minute of this story. Narrator made this story even more interesting.

If the presence of dragons aren’t enough to convince you to read this book, let my promise that the witty dialogue is well worth your time. The narrator has the perfect voice to tell this story; they couldn’t have made a better selection. Every scene is packed with conflict to hold your attention. There’s no need to test the water, so sink or swim, jump on in.

Holy gods! Why did it take me so long to find and listen to this book? It's really so much fun!
I realized that I was into something good when we started off fighting a normal house fire... and then things got real serious, real fast when they found the cause... A Dragon! After that there was a Scalzi (one of my top favorite authors) reference. In fact I had been thinking about John Scalzi and Old Man's War when I downloaded Smoke Eaters, as both books feature an older protagonist, so the Easter egg tickled me all the more!
Then they find a dragon's lair in Lechuguilla Cavern! I was super surprised and pleased at this, as I  have gone couch-spelunking in the Lechugilla cave system several times. First, in a PBS Nova episode, and then in Nevada Barr's fantastic story, Blind Decent! After that I fell deeply into it's intoxicating landscape pics available on the internet, so you can imagine my delight to be taken there once again. Only this time... with Dragons!  I'm pretty sure no stalagmites were actually harmed during the writing of the book... LOL !
Take it from me you're gonna want to read/listen-to this high-octane* book! It has plenty of heat and dragon action as Cole Brannigan learns what it means to be not just a firefighter but a true Smoke Eater!

... As for the narration? T Ryder Smith simply SMOKED this one!
5 Hot ★'s for Smoke Eaters!

*just so you know, high octane actually refers to a combustible fuels resistance to flashing over... the higher the octane rating, the less likely it is to combust, but as used in this review, it's commonly accepted to mean "more combustible"  This from my technically-minded husband...