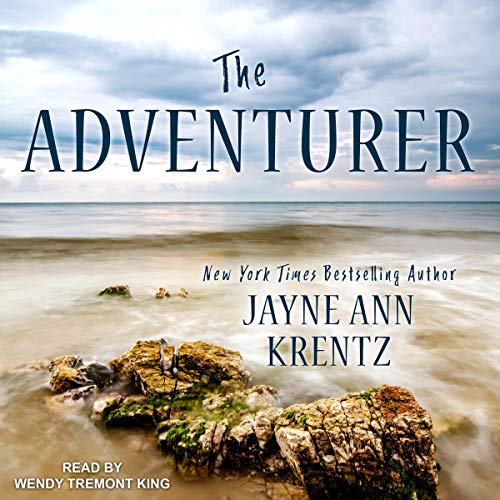 Romance writer Sarah Fleetwood is obsessed with the Fleetwood Flowers, five pairs of gold earrings that constitute a long-lost family treasure. According to the legend, shortly before her death, Emelina Fleetwood buried the earrings on her property and drew a map to the location. Now Sarah is determined to embark on a quest to find the flowers.

Ex-adventurer Gideon Trace doesn't want anything to do with Sarah and her quest for the Flowers, a fact he has repeatedly made clear ever since she first contacted him. Obviously his discouragement wasn't strong enough because now Sarah is standing at his front door insisting that he is just the man to lead her treasure hunt.

A woman who believes in happy endings is about to share a cozy cabin in the mountains with a man who is large, cold-eyed, and dangerous. What could possibly go wrong?

What listeners say about The Adventurer

Only got to chapter 4 and I have to return this book. Very disappointed. I honestly think JAK is a better writer than this...the book feels like a 15 year old wrote it. I know this is fiction but seriously, does any mature woman actually behaves like this or thinks it's ok to do so? I mean she corresponds with him on a professional matter for a few months, then shows up at his house completely unannounced and expects him to drop everything off and follow her on her "quest". She bullies him into taking her out for dinner, pries into his personal affairs and gets all uppity when he returns the favour...then pretty much has a tantrum when things don't go her way. To top it all up she's also convinced she's in love with him. All that after exchanging a few letters. Seriously, psycho vibes all the way through.

need another copy, hard to understand

the book was a bad copy. like a record skipping through the book. the disk was bad

The Adventurer not as powerful as Ms Krentz books usually are.

The story and characters are not as strong as I expected. I did not enjoy the narrators style the way I usually do. Had a hard time staying interested, and didn’t feel as involved or as connected as I normally do.