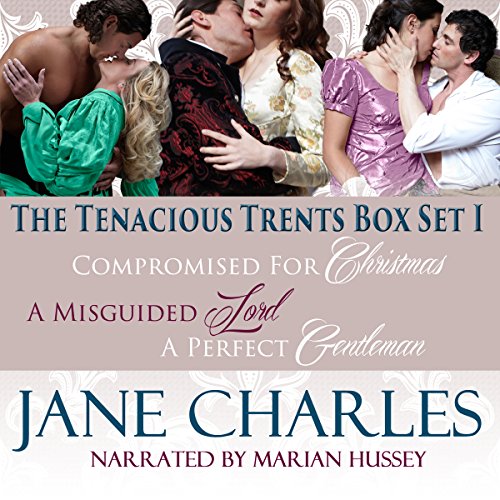 By: Jane Charles
Narrated by: Marian Hussey
Try for £0.00

The first three books of the Tenacious Trents series by Jane Charles, now available in a "box set".

Compromised for Christmas Lady Elizabeth craved excitement and adventure. Unwilling to endure further boring Seasons, she convinces her uncle, who has lived a more adventurous life than anyone else she knew, to let her work for him. A few years later, Elizabeth was established in Tuileries Castle, a servant in Napoleon's court known as Lisette Renard. John Phillip Trent has been working in the stables of Tuileries as Jean Pierre Bouvier for the past two years. . . .

A Misguided Lord It is time for Clayton Trent, Earl of Bentley, to take a bride. He knows exactly what he needs and the type of lady who should become his Countess. His life is orderly, scandal free, and exactly the way it should be until Miss Eleanor Westin careens into him, upsetting the perfect balance of his world. She is everything his father said he should not marry. Yet, he cannot put her from his mind, not even when a decade old scandal threatens the very foundation of his family.

A Perfect Gentleman Matthew Trent always knew what was expected of him and that was to become the perfect vicar and a perfect gentlemen. When Grace Cooper enters his life, he is forced to face what he really wishes to become. Grace Cooper has three options for marriage available to her in the small village where she resides. However, Grace would rather be placed on the shelf than enter into a miserable union. When someone threatens her father and then makes an attempt on her life, it is Vicar Trent who vows to protect her.

loved it very good tie ins and plot twists, very nice transition to each story and characters were well represented to drawn one in