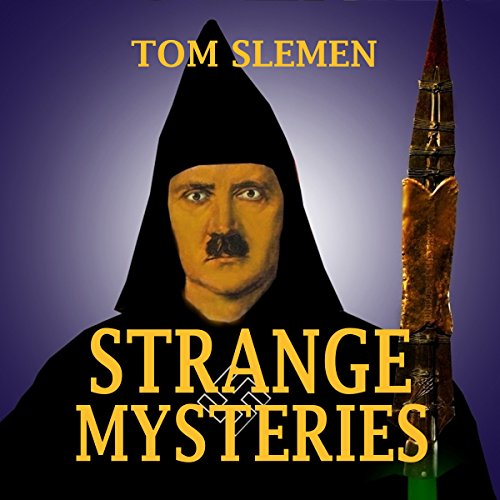 Disclaimer: This book is narrated by an English speaking American narrator using the Queen's English pronunciations per author's direction.

There are the usual mundane books about regurgitated mysteries, and there are books such as Strange Mysteries which boldly delve into the more offbeat mysteries of history, as well as mysteries of crime, space, and time. Within this amazing collection of 65 mysteries you will read of the mysterious Zodiac Killer who terrorized the West Coast of the United States in the 1960s - who was he? Could a new scientific breakthrough finally unmask Zodiac? Also in Strange Mysteries, you will even be provided with a truly mind-boggling answer to that question we have all pondered from time to time - Why are we here? Read that chapter at your own risk. In this fascinating book, you will learn what might have really happened onboard the Mary Celeste, and you will read of the sinister 1945 murder of an English warlock, as well as a host of other intriguing conundrums such as the possibility of aliens on our moon, and the intriguing reports of Joan of Arc being seen long after she was supposedly burnt at the stake. This amazing book also asks: Was Adolf Hitler a Black Magician? Did Shakespeare exist? How did a Welshman who flew before the Wright Brothers become omitted from the history books? Who was the Man in the Velvet Mask? What is the shocking truth behind President Lincoln's Assassination? Who were the Atlanteans? Do Vampires exist? Can a murder repeat itself 157 years after it is committed? How can we tap into the Akashic Records? Was Jesus of Nazareth an Extraterrestrial? Whose ghost is seen being executed in an electric chair on the London underground? What mathematical method did a super gambler use to break the bank at Monte Carlo? Plus many, many more mysteries to feed your unending curiosity!

What listeners say about Strange Mysteries

interesting book but so hard to listen to

the narration was robotic. spoiled the book. why would they choose that guy to narrate a book?

The subject matter of the book is good and as expected. If you enjoy the areas covered then you won't be disappointment.

The narration though is terrible. Lots of really simple and obvious words just mis-pronounced but the most annoying the narrators habit of putting the inflection and pauses in the completely wrong part of sentences! It is so off putting!

It almost sounds like it's not a human reading the book but a computer "text to speech" system.

Why did they pick someone who can't speak English to narrate?

The narration is really bad, really bad! It sounds like it's been recorded in a cupboard using Microsoft narrator.

That's it really, story is ok, interesting enough, but ruined by the narration I'm afraid.

This book exists as a collection of mysteries, ghost stories and supernatural phenomena. The stilted narration takes these stories and delivers them in a manner fittingly unhuman. It's one thing that the narrator's voice sounds like a robot created by aliens, but hearing British English in an American accent takes it to a strange new level. I'm convinced that the narrator was actually raised in the Uncanny Valley, since they mispronounce words nobody has ever mispronounced before. The stories are entertaining enough, just prepare to be unsettled by the performance.

What made the experience of listening to Strange Mysteries the most enjoyable?

Narrator is great, what a voice. Stories where all worth a few listens.

What does Michael D. Crain bring to the story that you wouldn’t experience if you had only read the book?

a voice of that puts a haunting spin on everything and is funny when he says Robert Debourdycrout!

Mr Crain must have never heard many of these words, cities, names, pronounced. I had to rewind several times to get Hoboken.

Has Strange Mysteries turned you off from other books in this genre?

I guess this needed to be proof-listened. The mispronouncements are just like misspellings.

This is an excellent book but the reader needs to improve his pronounciaton of several terms such Arimather instead of Arimithea, etc., ad naumeum. Other than these fopahs, the book is very pleasant to listen to.

Maybe, it was mildly interesting.

Narrator seemed to have poor grasp on pronunciations to the point of sounding incredibly ignorant and teetering on the edge of annoying.

Would you try another book from Tom Slemen and/or Michael D. Crain?

Would you be willing to try another one of Michael D. Crain’s performances?

No. He pronounces the names Nichola Tesla as Nichola Tesler and Nasa as Nasaw and Genghis Khan as Gengis Karn. Also his reading is choppy and very distracting.

The narrator mispronounces the simplest words, such as pronouncing “enigma” as “enema”, and “abominable” as “abonible”. At one point every word that ended in “a” was pronounced as If it ended in an “er”, but it’s not done like that throughout the book. There is a disclaimer at the beginning of the written description of this audio book stating that the American narrator is speaking using the queen’s English but that is definitely not the case, just extremely poor narration.

This was the first book I have read by this author and it will not be the last. It was a reread since there is now an audiobook version as well. I have read quite a few books of mysterious tales, some are better than others. Author Tom Slemen takes it to a whole new level. Extremely well researched and written (in the Queen 's English, hence the differences in spelling), there are a great many fascinating tales here for your enjoyment. Most are compelling, some are creepy and some outrageous. All are entertaining and well worth your time. I will definitely be reading more of his work. If you love unusual tales, this is a must read! The narrator was wrong for this sort of work and the mispronunciations of many words was annoying. Tom’s books fare better with British narrators.

If you're considering this book you obviously have an interest in these sorts of subjects. There are some great chapters & stories in there I was completely unaware of. But the audio is off. I'm not sure if it's a read-bot or what but there are LOTS of strange mispronunciations of VERY simple words (he constantly calls NASA "NASER" and Yahweh "Yarvey". It sounds nit picky but I promise they happen so often that it distracts from the book itself.

Good tales for nights you want to hear something strange. Fact checked some very unlikely. Some are creepy.

A good, entertaining book with an awful author

The headline says it all, I gave the performance 3 stars because the narrator didn't have a bad voice, he just desperately needed someone to correct his (frequent) mispronunciations. Better still would be to have someone who speaks The Queen's English, rather than as the author describes an 'English speaking American using the Queen's English pronunciations' (I am American, and would have found this much easier to listen to). Again, it is a very good, entertaining listen, even with the faults of the narrator. I would not hesitate to buy it again or recommend it, I just with they would re-record it.

A great story held back by narrator!