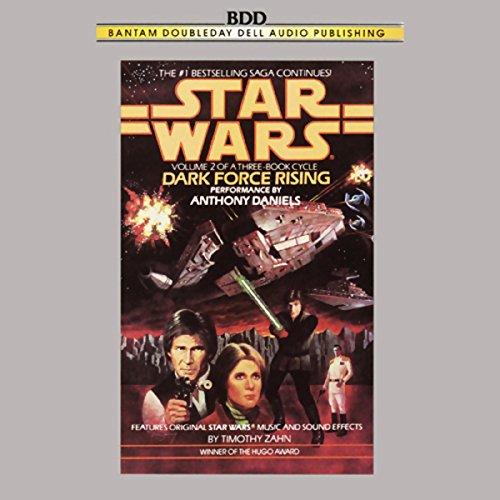 By: Timothy Zahn
Narrated by: Anthony Daniels
Try for £0.00

The dying Empire's most cunning and ruthless warlord, Grand Admiral Thrawn, has taken command of the remnants of the Imperial fleet and launched a massive campaign aimed at the New Republic's destruction. With the aid of unimaginable weapons long hidden away by the Emperor on a backwater planet, Thrawn plans to turn the tide of battle, overwhelm the New Republic, and impose his iron rule throughout the galaxy.

Meanwhile, Han and Lando Calrissian race against time to find proof of treason inside the highest Republic Council, only to discover instead a ghostly fleet of warships that could bring doom to their friends and victory to their enemies.

But most dangerous of all is a new Dark Jedi, risen from the ashes of a shrouded past, consumed by bitterness...and thoroughly, utterly insane. The Dark Jedi schemes to use his awesome mastery of the Force to summon young Skywalker, allay his misgivings, cunningly enthrall him, and ultimately corrupt him to the Dark Side.

Very good book, the narration almost made it feel like I was watching a movie. Truly brilliant.

Great story but 3PO reduces the characters to childlike representations of good and evil using silly voices. Imperials sinister, Rebels bold and strong and weirdly all smugglers are cockneys in this universe. Shows total lack of understanding for what was a great book. Denis Lawson (Wedge) much better in book 1.

I read the first book in the Thrawn series and I thought I would give the audio a try. I was pretty disappointed. As great as Anthony Daniels is as C3P0, he does not have the ability to portray a wide range of voices which is necessary for a project such as this. Some of his character voices sound rather hokey and it is difficult to distinguish between between his female and male voices.

The other main draw back is the abridgement. While a book that is made into a movie is commonly abridged to 2 or 3 hours, this does not work well with audio. Although many of the Star Wars audio books use the 2 to 3 hour length, most other abridgments are considerably longer. It was difficult to follow the story line here since so much had been cut out. Hopefully the Star Wars franchise will take note of current trends and start making longer audio books.

The story is ok and well performed, but I just don't understand why publishers waste time creating abridged books. By not needing to use your eyes, your reading time is greatly expanded. Abridging is a travesty to begin with - even made worst by doing it on this format...and then not even offering the unabridged version. I don't see how any abridged book can get higher than a mediocre rating.

This trilogy by Zahn is what brought Star Wars back into our collective conscience. Why then are his audio books abridged? I love the story, and I love being able to listen to it on my iPod at the gym, but slightly disappointed in not being able to listen to the entire work as Zahn originally penned it. It's still a good listen, even though it leaves out half the book. It would be awesome though, if there were radio drama style, unabridged, versions of his books.

UNABRIDGED AND NOT LIKING IT

I typically purchase 2-3 audible books a month.
Having just finished"Heir to the Empire" I immediately signed up,for the 2nd in the series.
STUPID on my part.I didn't read the reviews 1st.This is an ABRIDGED SEQUEL TO AN UNABRIDGED "ANNIVERSARY EDITION"1st volume.
This is not right.
Would somebody at Audible answer me :
[1]Why do you even offer unabridged versions of anything ??
[2] Why do you charge a full credit for less than half the content ??
[a half of credit would be more in line].
[3] Is it fair to mingle abridged versions in a series that also contains un-abridged versions??
Offering only unabridged books would seem to be the best policy.If audible can't offer the unabridged version then don't offer anything at all.If there is some reason you just have to offer abridged you should offer a pop up in red that says at point of purchase:
THIS IS AN............ABRIDGED VERSION...........,DO YOU WANT TO PROCEED ??

Those who didn't listen to the 20th anniversary version of Book One.

Would you ever listen to anything by Timothy Zahn again?

I don't know. This seemed like something I could've written in my sleep.

Would you be willing to try another one of Anthony Daniels’s performances?

What character would you cut from Star Wars?

The book was too short and rushed to cut anyone.

I have read the book more than once but the reading of this story was disapointing at best. Book 1 was read by Marc Thompson and it was wonderful. But the 2nd book was hard to understand because of the accent. Many parts of the book were left out. This is such a great book that it was frustrating to have so much of it left out. I understand they can not read the entire book but too much was cut out. I hope they redo this one like they did book one.

This is not the book you're looking for.

Got this one by mistake and it's abridged with terrible narration. Get the full version narrated by Marc Thompson. Not only is Anthony Daniels completely monotone and boring but he can't even pronounce names correctly. Mispronouncing Coruscant are you serious?

The first book in this series was great, this second one was short and just didn’t capture me like the first. Anthony Daniels should really only be voicing his main character 3PO, because he doesn’t have much range for anyone else. It’s also a let down from the first narration. Story is good, just the narration could be better. Luckily this was short or else I might not have finished it.

The abridged version is terrible and Anthony Daniels pronunciation is horrible. I wish I could ge my credit back.