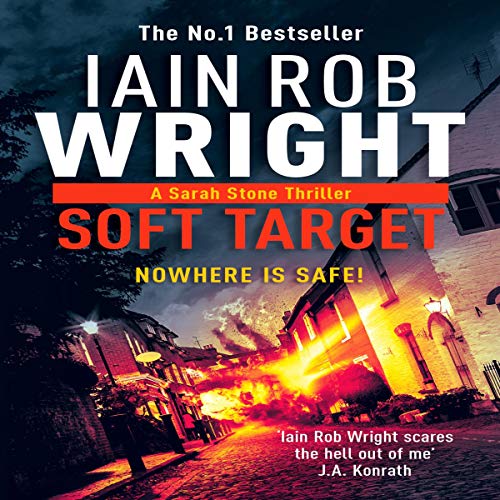 By: Iain Rob Wright
Narrated by: Jean Wilson
Try for £0.00

When a quaint village in the United Kingdom is struck by a suicide bomber, the once proud nation is brought to its knees. Yet, that first attack was just the beginning of something far greater and much much worse. Something that no one could ever have predicted.

The days to follow will determine if the UK has a future left in the modern world or if it will be reduced to anarchy and ashes.

The one person who stands between the people of the UK and complete destruction is a damaged ex-solider, Captain Sarah Stone. Sarah despises her country for what it did to her, which is what makes it so difficult when she is forced to save it.

Soft Target is the first in a series of books featuring acerbic protagonist Captain Sarah Stone. It is a nonstop action thriller in the same vein as 24.

What listeners say about Soft Target

A pretty week story with a heroine that always seems to come off worse. On top of that the narration is very poor with awful accents. Made it very hard listening.

Beware; books 2 & 3 not available on audible!

I really enjoyed this book, so much so that I immediately tried to find Books 2 & 3 (Hot Zone and End Play). Unfortunately neither are currently available on Audible! My local library didn’t have them either so I ended up buying both from Amazon!