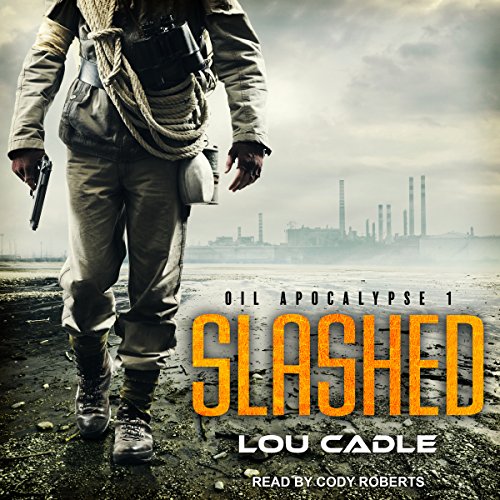 It's the end of oil. We knew it was coming one day. But it happened so fast!

Devlin Quinn turns 16 the same week that a battle in a distant war shuts off the flow of imported petroleum to the US.

Gas runs low, then runs out, and soon the highways are empty.

And then it gets very serious. The grocery store shelves are empty, and people become desperate for food.

Dev is trained to fight-his father made sure of that-but is he trained enough? Smart enough? Tough enough? He is about to find out when people desperate for food flee the burning cities and attack....

What listeners say about Slashed

I liked this a lot,
A great story as always from a good writer who builds characters well, you get invested in their future. Yes I enjoy a good disaster story and this delivers, we should all ask ourselves not what would we do in the same situation but how would we react, the moral question is posed a number of times and gets you thinking. Lou Cadle is fast becoming my favorite author and Cody Roberts as the narrator puts just enough life to each voice without being over dramatical
I have listened to all three books and will put the same review on each as I have enjoyed each of them equally.

Narrator lets it down

I had to speed this up to be able to listen to this narrator. His voice is very slow and methodical. The actual story is really good though with excellent characterisation and plot.

Great first book in the series. I really enjoyed the Gray series, so I’m very pleased that this is going to be just as enjoyable.

not as good as Gray

It took me a long time to get into this book, and although I have listened to Gray many times I doubt I will be listening to this again any time soon as I was not keen on the narrator.

What was one of the most memorable moments of Slashed?

Without spoiling the story I think about a third of the way through the book it got better and the storyline faster.

Would you be willing to try another one of Cody Roberts’s performances?

no I did not like his style of reading.

I like Lou Cadles Gray and thought I would like this too but I was not keen, but I think that might have been down to the narrator.

A great read,/listen with interesting plots and fantastically realistic characters.
Can't wait for the next book!

I loved this book. I think it is realistic of what might happen, and how fast, if oil production stopped. Makes me look at my "prepper" neighbors differently and wonder if I am built to survive. I liked how each character went into survival mode in their own time and manner.

Decent Story, But Lacking Something

Overall the story was pretty good, but there were a few weaknesses in the storyline and characters. Also, the author is either confused or has never used NVGs (nightvision goggles), because he kept talking about seeing heat signatures with the NVDs, but NVDs see light just below the visual spectrum not thermal...That would require Thermal equipment such as a FLIR!

so very very sick of supposedly Intelligent characters acting stupid just to move along the story.

Excellent storytelling. Great characters and superb narrative , The length of audio wall worth the purchase

Would you listen to Slashed again? Why?

nope... looking forward to the continuation; no need to re-read

characters realistic... i know many of these people

Which character – as performed by Cody Roberts – was your favorite?

a few moments were emotional

book 1's that have no real finish annoy me slightly... the only reason for 4 stars instead of 5

I liked the story. It has an interesting angle and some of the characters even reminded me of people I know. This author has more books that I recommend others should listen to also.

OMG guys, the narrator is, like, soo distracting with GenY way, emphasising every second word