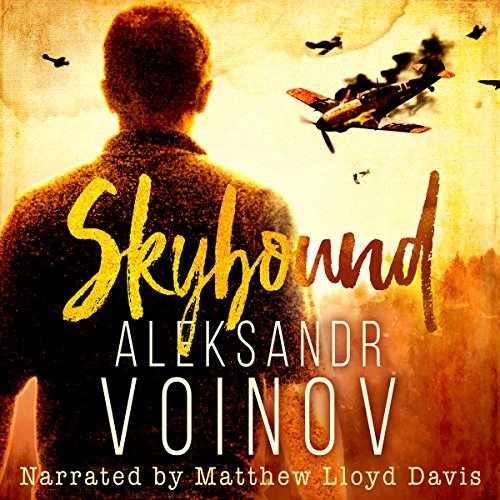 The Third Reich is on its knees as Allied forces bomb Berlin to break the last resistance. Yet on an airfield near Berlin, the battle is far from over for a young mechanic, Felix, who's attached to a squadron of fighter pilots. He's especially attached to fighter ace Baldur Vogt, a man he admires and secretly loves. But there's no room for love at the end of the world, never mind in Nazi Germany.

When Baldur narrowly cheats death, Felix pulls him from his plane, and the pilot makes his riskiest move yet. He takes a few days' leave to recover, and he takes Felix with him. Away from the pressures of the airfield, their bond deepens, and Baldur shows Felix the kind of brotherhood he's only ever dreamed of before.

But there's no escaping the war, and when they return, Baldur joins the fray again in the skies over Berlin. As the Allies close in on the airfield where Felix waits for his lover, Baldur must face the truth that he is no longer the only one in mortal danger.

What listeners say about Skybound

Something Completely Different But Just As Good

This was a short, sweet read, proving that the author can write more than just dark, twisted hate/love relationships. I wasn't sure I'd like it as the initial pace seemed a bit slow, but in the end, the two main characters coming together and the action-filled conclusion melted my heard.

I was literally left speechless. Pure perfection I was told, and it was no lie. Do yourself a favor and join this free-fall of emotions, you won’t regret it!

Skybound is a Treasure

Where does Skybound rank among all the audiobooks you’ve listened to so far?

My original book review stands. (See my blog). I won't change it, but I can say without question this audio version enhances the experience of Skybound, beautifully, as well as my feelings for it. Here I will focus on the audiobook itself and the delivery by the narrator.

First and foremost the quality of Matthew Lloyd Davies’ voice is ideal. He has an airy, lofty cadence that imparts the feeling of lift and flight. He doesn't swoop and soar, but instead carries the audience along on the wings that this story is built upon. And most importantly he conveys the brilliance of the writing.

Further into the story there is perfection when Felix's innocence and timidity need to come through. And they do. Not only am I told that his pulse is racing, but I can hear it in the narrators breath.

Finally, the melancholy tone that runs through the book is heard deep down in the vocal chords, but they don't cover up the endless, yet waning, hope that keeps you linked to each word. Despair, pain, loss, utter love and awe are all heard, and felt. And something that I had somehow forgotten came through clearly, Felix's strength. Yes, this modest man, who has seen so much loss, clings to his capabilities which show his devotion and care. He almost comes across as arrogant, but it just allows you to love him all the more. Timid Felix has strength that he doesn't know he possesses. But Baldur knows. And you will too after listening to this treasure.

What made the experience of listening to Skybound the most enjoyable?

Let me gather my emotions for a bit here , wow just wow .... My feelings are all over the place at how this very short but perfect beautiful story has made me feel.
This audible even thought is jus about one hour and a half - Is non the less
PERFECTION.
THE STORY Should be made in to a movie exactly as it is written.
WOW JUST WOW!! What a work of art this is.
Just a beautiful master peace, no word was wasted in writing this book. The narrator was perfect for this audible also. Please give this a read or a listen. just perfection.

Have you listened to any of Matthew Lloyd Davies’s other performances before? How does this one compare?

is just perfect for this book

the ending was perfection.

give this a listen is worth it!