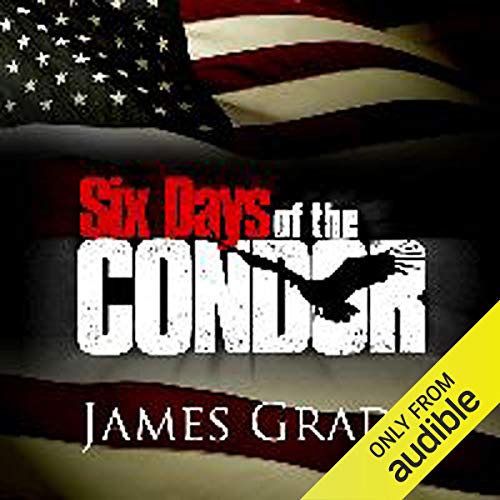 Six Days of the Condor

By: James Grady
Narrated by: Nick Sullivan
Try for £0.00

When CIA operative Malcolm, code-named Condor, discovers his colleagues butchered in a blood-spattered office, he realizes that only an oversight by the assassins has saved his life. He contacts CIA headquarters for help, but when an attempted rendezvous goes wrong, it quickly becomes clear that no one can be trusted.

Malcolm disappears into the streets of Washington, hoping to evade the killers long enough to unravel the conspiracy - but will that be enough to save his life?

What listeners say about Six Days of the Condor

The Condor still has wings

I have loved and often revisited the film, Three Days of the Condor, for many years. How good it was to hear the original book, slightly different perhaps, but also excellent. Unlike some other reviewers, I found the narrator carried the story well
Well worth the purchase and I know that I will listen again in the future.

saw the film many years ago and enjoyed it, so thought I would read the book. the book is slightly different buy enjoyable all the same.

I gave this book one star because a lower rating is not an option. If you are considering this book because you liked the film, don't!! Typically, films are (bad) summaries of the movies with condensed characters and simplified plots. That is NOT the case here. Any association between the superb movie "The Three Days of the Condor" and this book is casual at best. How the film is an "adaptation" of this laugahbly bad b-rated story defies explanation. The movie has a much more complicated plot, better developed characters, darker social commentary, and immensely superior dialogue.
SPOILER ALERT------------------
The book reads (or hears in this case) as the teenage fantasy of a reluctant James Bond character (Ronald Malcom in the book, Joe Turner in the movie) who spends 6 days eluding the CIA, the police, the FBI etc. while seducing women (who unlike the character of F. Dunaway in the film) believes him immediately, agrees to help him, and sleeps with him, almost immediately after meeting him. The "bad guys" have ludicrous motivations for their deeds, and Malcom's revenge in the end is laughable. In the film the Joubert evades justice and is re-hired by the CIA and has probably one of the most memorable exchanges in spy films with J. Turner. Joubert in the book is laughably inconsistent. I could go on and on listing the numerous inconsistencies, outrageous coincidences, and idiotic plot twists from the book but it is hardly worth it. My recommendation to you, watch the film again, if you want to listen to something, listen to the film.

First book I've read where the movie was better.

Would you listen to Six Days of the Condor again? Why?

Nope, because I've seen the movie so many times.

No, its a little slow. Had trouble keeping track of the names.

The love store isn't believable. I can see why they re-worked the book for the movie. Still a great read. Probably would have been better if I wasn't such a huge fan of the movie.

Mediocre book that was made into a great movie

What would have made Six Days of the Condor better?

Six Days of the Condor caught my attention because I loved the 1975 movie with Robert Redford so much. It was a cool, taught thriller about the world of the CIA and its questionable moral code. But as I listened to the source material, I realized very quickly that James Grady was a novice novelist and Nick Sullivan's narration is so academic that you feel you're listening to a non-fiction textbook, rather than a thriller. It makes me appreciate the direction of Sydney Pollack, the screenwriters, and the cast, for making Three Days of the Condor so enjoyable.

Would you be willing to try another book from James Grady? Why or why not?

No, he seems to be a weak novelist who happened on a great idea that turned into a One-Hit Wonder.

Would you be willing to try another one of Nick Sullivan’s performances?

No, his delivery is so academic that it's devoid of suspense.

This book was super fun to listen to and very intense, I also liked the narrator

This suspenseful classic was ruined as an audiobook by Nick Sullivan's sardonic and almost bemused rendition...zero suspense. I didn't think that was possible but Nick accomplished it.

More enjoyable than the movie.

Yes, this is a great spy thriller. Definitely a "page turner". It is quite different than the movie which is "Three Days of the Condor" because it takes place over longer time so more details and depth are provided.

Good yarn- a little dated- I recommend it.

I enjoyed the book. Great storyline, excellent plot, and well written. However, was written in the '70s and a felt little dated. I'm from that era, and I felt comfortably nostalgic. The narration was perfect, and I was completely absorbed.

James Grady's introduction to the book was useful and made the audiobook experience more meaningful.

Where does Six Days of the Condor rank among all the audiobooks you’ve listened to so far?

Its in the upper 25%. The story is fairly intense and Condor is quite creative. The narrator adds a lot to the overall rating. Four stars on the story because the ending wasn't as tight as the rest of the story. Nick Sullivan was five stars on this one.

It feeds my middle-aged male fantasy. Condor reads spy novels; I read spy novels. Condor is being chased by assassins; I might be chased by an assassin...hey...it could happen. Condor, armed with his spy novel education, surprises the spy world by outsmarting them repeatedly; I might outsmart a spy....well you get the picture.

Which character – as performed by Nick Sullivan – was your favorite?

The old man and Wendy.

I have two:1) The worst bad day at work ever...2) I am soooo calling HR when this is over.

The book is set in the 70's which levels the playing field for Condor and forces the writer to be more creative. Modern books sometimes get carried away with technology. Also, in modern spy novels you can overcome any plot problem with some new spy tech "the public doesn't know exists" which can make writers lazy. Condor's solutions were actually inventive and didn't employ the far-fetched tricks in some of our modern stories.

This is the rare instance where the movie was better than the book. I liked the author discussing the differences between his work and the screen play. It was very interesting. As a first try the book is ok, but not the very fine story the screenplay became. The changes to the female character and the villan were much more interesting in the movie than they were in the book.

The underlying premise of the story is great and the story flows well, as does the narration.

I did find it a bit of a stretch to think that someone who was not a field agent would have all the skills needed to take on the "bad guys" in the way the hero does....(which is why I went for 3 stars - the underlying plot is more 4+)... but it is fiction after all.

Never-the-less it kept me listening and wanting to come back for more until it was finished.

The narration was well modulated and clear.