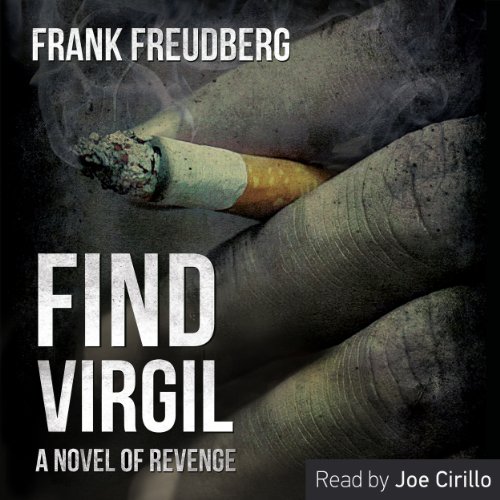 A Novel of Revenge
By: Frank Freudberg
Narrated by: Joe Cirillo
Length: 11 hrs and 8 mins
Categories: Crime & Thrillers, Suspense
4.5 out of 5 stars 4.5 (2 ratings)

And he's going to do something about it. It's 1995, and the tobacco industry thinks it's invincible. But is it? Muntor devises an ingenious strategy to put Big Tobacco out of business, and he doesn't care how many people he has to take with him in order to do it.

Cigarette company investigator Tommy Rhoads has other ideas, though. Who's right, and who's wrong? Read Find Virgil now, and go along for the wild ride. You'll never forget it.

Find Virgil by Frank Freudburg. A really good detective thriller with good audio narration by J Cirillo.
A beginning, a reason, a middle and a satisfactory ending. All which makes a good story.
Glad it’s only fiction as I couldn’t decide on whether I was for or against the reason of the criminal !
But, I have to read or listen to more of his books.

There was a vintage air about this production which went very well with the subject matter. I shouldn't wish this story were true, but I do.... I don't wish a vigilante killer was on the loose, but there are so many greedy multi millionaires out there who owe their wealth to the pain & suffering of those who smoke/ed.... I rest my case.... Great book, really enjoyed it.

What a story! Mr. Freudberg weaves a psychological thriller that will keep you up late into the night. Imagine finding out that you are dying of cancer from second hand smoke after living a life devoted to treating your body like a temple. That's what one man discovers and he's mad as heck... to the point where he's ready to teach the tobacco companies a lesson that they will never forget. He crafts his revenge and their customers start dying. And this is just the beginning of this wild ride.

What comes is a classic cat-and-mouse game as powerful forces try to find the man calling himself Virgil. As the story masterfully unfolds, you'll meet wonderfully flawed characters who battle through their own personal struggles while uniting (albeit with different motives) for the common cause of finding this man before others die.

The author develops characters you'll identify with, sometimes loving them, sometimes hating them, but always engrossed in their lives. The pace is steady and always wanting you to get just a little more of the story before you put it down. Before you know it, hours have passed by.

I am definitely a new fan of Frank Freudberg and can't wait to find more from him.

Have you listened to any of Joe Cirillo’s other performances before? How does this one compare?

I am a fan of Joe's work and actively look for books he's narrated. This is another gem from the narrator.