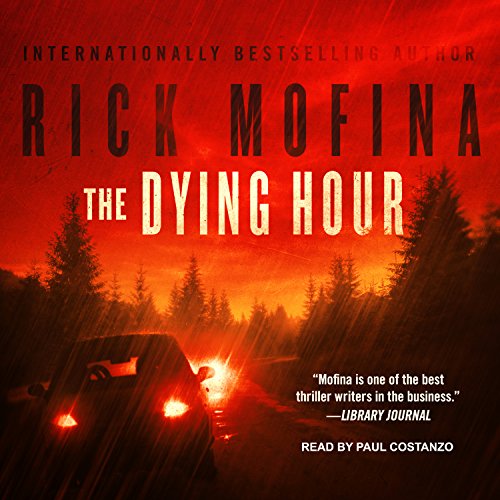 By: Rick Mofina
Narrated by: Paul Costanzo
Try for £0.00

The Dying Hour introduces Jason Wade, a rookie crime reporter with the Seattle Mirror, a loner who grew up in the shadow of a brewery in one of the city's blue-collar neighborhoods. At the Seattle Mirror, he is competing for the single full-time job being offered through the paper's intense intern program. But unlike the program's other young reporters, who attended big name schools and worked at other big metro dailies, Wade put himself through community college, and lacks the same experience.

Wade struggles with his haunting past as he pursues the story of Karen Harding, a college student whose car was found abandoned on a lonely stretch of highway in the Pacific Northwest. How could this beloved young woman with the altruistic nature simply vanish? Wade battles mounting odds and cut-throat competition to unearth the truth behind Karen Harding's disturbing case. Her disappearance is a story he cannot give up, never realizing the toll it could exact from him. The Dying Hour is a bone-chilling, mesmerizing tale that introduces listeners to an all-too-human young hero who journeys into the darkest regions of the human heart to confront a nightmare.

What listeners say about The Dying Hour

Mr. Mofina definitely has my vote for killer-diller stories. The "hero" of this one is a newspaper reporter intern desperately seeking to make his mark and thus have a permanent job at a newspaper in the Pacific northwest. The character development is first rate (as all Mofina's characters are). Jason digs and digs till he unearths a grisly serial killer. I'll say no more but if you want to be drawn-in from the beginning to a mesmerizing story: GET THIS BOOK!

Paul Costanzo was excelletn with the delivery of the story

This is a "bone-chilling, mesmerizing tale" as described in the Publisher's Summary, which gives a good description of the overall story. This story might be for you if you like crazy ritualized killings.

Young women are being kidnapped, brutally tortured and murdered. The "blood and guts" descriptions were a little too much for my taste, and there were a couple places in the storyline that captured my "squinty eye" and a raised eyebrow. But overall, I thought the story average.

...the reviews of mystery/thriller novels by Audible listener Shelley of Raleigh NC have pointed me to wonderful new authors and great series. In this case the author is Rick Mofina and the series protagonist is Jason Wade. After reading her review of this book I decided to try another Mofina novel in another series first. That novel is Be Mine and the series is Tom Reed and Walt Sydowski. It is well worth a listen.

The Dying Hour is a great dark psychological thriller. As an intern with a Seattle newspaper who hopes to get a permanent reporter job Jason Wade latches on to the case of a missing young woman. This is a great novel, but be warned that parts of it are very gruesome. I strongly recommend this audio novel and this series.

Why isn't this author getting recognized? Excellent book...

This is such a good author who pulls his books from his own experience as a crime reporter. In "The Dying Hour" Rick Mofina has written a taunt suspense that moves along rather quickly, keeps the listener on the edge and complex enough to keep you guessing until the end. Actually this book points to one individual almost from the beginning only to throw in a plausible twist at the end.
Young women are being kidnapped and brutally tortured. Our hero Jason Wade who is a relative newbie that is consistently thwarted by his boss but refuses to give up. There are a few background conflicts going on which help to make flesh out the story. There are no dull moments and I was sorry to come to the end. I am hopeful that this is the beginning of a new series, this character has tons of potential.
Paul Costanzo did an excellent job narrating.
HIGHLY RECOMMENDED.
If you found this review helpful please indicate so.
Thank You.

Wished I would have listened to first book before getting all 3 in this series. His last series was great. But the narrator Sounded like the Badger in Winnie the Pooh, with the whistling S's. Was hard to listen to. The Story line was very hard to listen to as well. Lots of torure and dark areas. Not as good as his first series of Homicide detectives and Journalist.

Wish someone would have flagged the narrator

This book got great reviews but I just can't get past this terrible narrator! I can't finish the book. I wish Audible would vet their narrators better. The narrator did not even change his voice at all between characters so you're left wondering which character was speaking. It was too distracting for me to follow.

Like a Great Procedural, Welcome to the Copy Desk

I read A Perfect Grave, the third in this series, first and loved it, despite the fact I suspected the series should be read in order. I was right in one sense, the Jason Wade story is an amazing coming of age tale. The making of a great reporter. However, having read three of the novels now, I have to say each novel's story stands well enough on their own.

The Dying Hour revolves around young Jason Wade, an intern in competition with 5 other interns for a job as a reporter for Seattle's leading paper. The paper is a proud enterprise, boasting numerous Pulitzers and prize winning journalists. Jason is the renegade contestant, having worked himself through night school. The other interns come from the best journalism schools, with powerful family connections. This alone is enough to have kept me interested, but the suspense of a kidnapping and murders makes it a 5 star listen.

The crimes are gruesome, the mystery of who is behind them and who will survive is stunning. As my headline suggests, we view the hunt from the news desk. It is much like a police procedural. Internal and external politics, police relations, ethics, and hardcore street work all fit in to story.

So start here, and treat yourself to an amazing series.

Huge fan of Rick Mofima but this book was too intense for me. Just wanted others to be aware.

This is a good book, if you can get past the narrator. He has the whistle in his words and ( I’m goi f to do my best to describe this sound) after he speaks his words he also has that smack with the sound of extra saliva. It’s really difficult to explain you have to listen to the sample of it. I got thru the book but it was very difficult and it was very annoying because if you play your books loud as do I,
Then you can hear it. Like I said it is a very good story however the narrator is very hard to listen to.

no I didn't love it. I did finished it. felt it dragged, very gory. I've read at least 9 other books by Rick Mofina and absolutely love all of them. this one however, was not as good as the others. sorry, I wanted to like it.