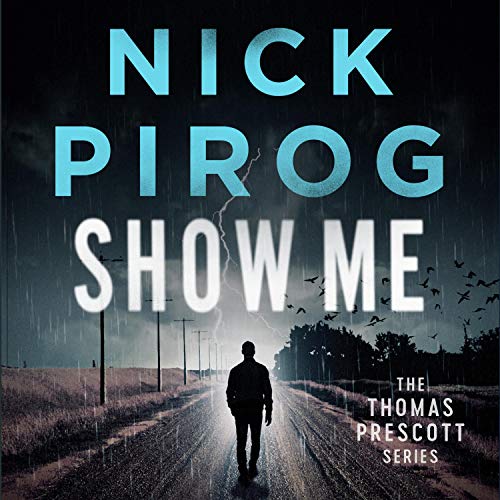 By: Nick Pirog
Narrated by: Johnny Heller
Try for £0.00

In the electrifying fourth book in the best-selling Thomas Prescott series, Prescott must prove a horrific crime in a small town is tied to Big Biotech.

When retired homicide detective Thomas Prescott learns he’s inherited a 250-acre farm in Tarrin, Missouri (pop. 2,100), he can’t get there fast enough. As he slowly acclimates to small-town living, he hears rumblings about a horrific crime in the town’s past. Four years earlier, a recently fired employee of the local grocery store enacted his revenge, shooting and killing the owner of the store, plus four customers, then turning the gun on himself. The crime appears to have been solved, but Prescott has his doubts.

Balancing farm life and a budding romance with the town veterinarian, Prescott begins reinvestigating the crime. On the surface, the case is cut and dry - a revenge killing gone bad. But what if revenge wasn’t the motive? What if the store owner wasn’t the target?

One by one, Prescott delves into the victims’ pasts. As Prescott digs deeper, he discovers the murders were 20 years in the making and soon finds himself in the unfamiliar waters of Big Biotech, GMOs, political payoffs, hired mercenaries, and the shadowy past of one of the most hated companies in the world.

What listeners say about Show Me

This is the fourth in the Thomas Prescott series. I really enjoy the imaginative storylines and clever plots Nick Pirog comes up with in this series. Although this is the fourth each book can be listened to as a stand alone. Start with which ever book you want but do yourself a favor and start.
This book takes Prescott out to Missouri (the show me state). He finds himself going up against the local police and large chemical company very similar to Monsanto. Why would he do this when he just moved into the farmhouse he inherited from his father? Well, doing what Prescott does best- minding others people's business and asking questions he is warned of by the local police. He was planning to drop it. His questioning the locals about the murder of five people at a grocery store was his own curiosity, he used to be a homicide detective. But the warning was a red flag. And then someone he's supposed to meet with is murdered.
Pirog is wonderful at mixing sarcasm and humor into all his books.
Johnny Heller does an outstanding job narrating
Very HIGHLY RECOMMENDED.
If you found this review helpful please indicate so.
Thank You.

I absolutely love Thomas Prescott, and all his smart assness! And Johnny Heller is the most amazing narrator!

Gratefully, April is around the corner, cause ‘The Jungle’ comes out. Already pre-ordered it!

Wish “Arrival” and “The Speed of Souls” was on Audible! I drive a lot for work and don’t have time to read an actual book, plus I love Johnny (the Narrator)!

I stumbled upon these books while scrolling through Audible Plus Catalog & so glad I did. His writing style is like no other- it’s real. You actually feel like you know these people. Excellent character development.

5 stars all the way!

The story was really decent. The author has a good sense of humor and it shows. Took me a bit to get used to the narrator's voice. It's okay, but somehow I feel like a different narrator might be better .

I immediately fell in love with the ongoing witt throughout Thomas's character! I loved the commentary and the choice of narrator. Great storyline 👏

Nick has written another winner for his readers. The research he’s put into this book tells in the details. The humor is uplifting and the mystery is, as always,
a delightful ride.
You must listen to the entire book which includes Nicks notes. Both in the beginning and the end.
Thank you, Nick, for your wonderful wit and charm.

Very good story mixed with laugh out loud humor. I really like NP writing style. He is superb at mixing the serious with the humor and making it work. I highly recommend this book.

This guy is the real deal. Don't miss out on all his books. Fantastic storytelling

I thoroughly enjoyed the story....

The story was good, some of the details were alarming because there are so many foods that are being genetically modified and have been proven to be deadly, yet this fact has Not stopped the production or consumption of these products! The Narration and humor is Excellent as always and I am looking forward to the next book in the series. Let's keep it going Nick!!!