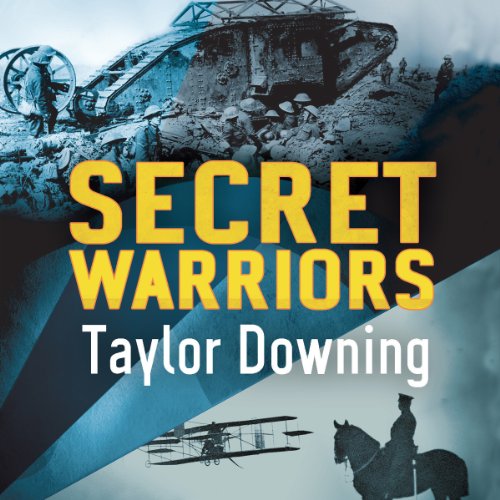 By: Taylor Downing
Narrated by: Sean Barrett
Try for £0.00

The First World War is often viewed as a war fought by armies of millions living and fighting in trenches, aided by brutal machinery that cost the lives of many. But behind all of this a scientific war was also being fought between engineers, chemists, physicists, doctors, mathematicians and intelligence gatherers. This hidden war was to make a positive and lasting contribution to how war was conducted on land, at sea, and in the air, and most importantly life at home.

Secret Warriors provides an invaluable and fresh history of the First World War, profiling a number of the key figures who made great leaps in science for the benefit of 20th-Century Britain. Told in a lively, narrative style, Secret Warriors reveals the unknown side of the war.

"The Bruneval Raid was the start of the airborne brotherhood. Taylor Downing's vivid account brings alive this important turning point in military history with flair and pace" (Andy McNab, author of Bravo Two Zero, on Night Raid
"Taylor Downing's brilliant research has created a ripping yarn" (Sunday Express on Spies in the Sky)
"A fascinating read and a significant contribution to the history of the Second World War" (Professor David Reynolds, author of In Command of History, on Spies in the Sky)
"A vivid and fast-paced retelling of Churchill's remarkable career" (David Evans, Financial Times, on Churchill's War Lab)

What listeners say about Secret Warriors

A very interesting look at some of the "secret" areas of World War 1 which are now gaining much more attention due the anniversary. It was still full of some very interesting information and would be well worth a read for anyone with even a passing interest in WW1.

The only let down was the ending which consisted of listing the key individuals mentioned in the book with a little personal history. However this does become a bit monotonous and hard to remember who was who. This did result in a feeling that the book was just drifting towards and ending rather then reaching a firm and well rounded close.

What there is of this book is certainly interesting. However, there's a lot missing. For instance, the focus is mostly on British scientific work, with very little German or other nations involved. There's no mention of the development of aerial bombing, one of the most important developments of WW1 in terms of its impact on future wars; no real discussion of Zeppelins. And the discussion of medical developments, whilst interesting, felt overly detailed in a work of primarily military history.