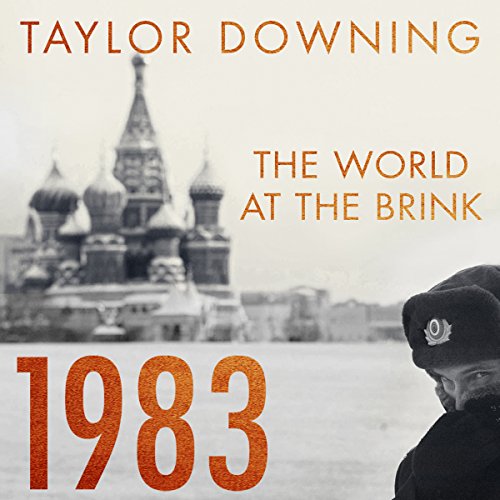 By: Taylor Downing
Narrated by: Ben Onwukwe
Try for £0.00

1983 was a supremely dangerous year - even more dangerous than 1962, the year of the Cuban Missile Crisis. In the US, President Reagan massively increased defence spending, described the Soviet Union as an 'evil empire' and announced his 'Star Wars' programme, calling for a shield in space to defend the US from incoming missiles.

Yuri Andropov, the paranoid Soviet leader, saw all this as signs of American aggression and convinced himself that the US really meant to attack the Soviet Union. He put the KGB on alert to look for signs of an imminent nuclear attack. When a Soviet fighter jet shot down Korean Air Lines flight KAL 007 after straying off course over a sensitive Soviet military area, President Reagan described it as a 'terrorist act' and 'a crime against humanity'. The temperature was rising fast.

Then at the height of the tension, NATO began a war game called Able Archer 83. In this exercise, NATO requested permission to use the codes to launch nuclear weapons. The nervous Soviets convinced themselves this was no exercise but the real thing.

This is an extraordinary and largely unknown Cold War story of spies and double agents, of missiles being readied, of intelligence failures, misunderstandings and the panic of world leaders. With access to hundreds of extraordinary new documents just released in the US, Taylor Downing is able to tell for the first time the gripping but true story of how near the world came to the brink of nuclear war in 1983.

What listeners say about 1983

Enthralling but let down by narration

An excellent insight into how close we came to war, with some fascinating detail. Narration is poor, though. American accents are all over the place, and the rest is delivered in a rasping croak which sounds like it's being read by a carrion crow.

Ok the content was good and the narration very good until the parts where there are quotes for Americans, for some mad reason the narrator puts on a terrible and inconsistent American accent that manages to slowly change back into an English accent by the end of the quote. Inextricably some of the quotes for Russians are also done in a strange America type accent. I got to chapter three and couldn't take it anymore the accents where so off putting I had to give up on the book.

This is a very good listening. A well written, very well narrated audiobook, covering some of the most momentous times of the cold war era, ending up with the arms reductions treaty now being scuttled by the incompetent Trump administration.

This recording is basically unlistenable. The awful accents he tries to mimic, which seem to go in between different regions and strengths even in the same sentence, totally ruin it. And his voice in general is so gravelly and low it’s hard to listen to.

The most irritating and uncomfortable audio. So off putting I can’t listen to another moment having paid for it. Sounds like a very hungover guy with a cold croaking away. Like nails on a blackboard after a while. Avoid, I wished I had listened to a sample first, I’ll never make that mistake again !!

Interestingly, the British narrator uses the same "american" accent for every single american person in the book (from Regan to Schultz)... Makes it hard to listen to.

A clear, incisive and interesting account undermined by inconsistent accents and inexplicable pauses. The narrator has a fine voice, but I found his reading frankly jarring.

It has a focus on 1983 but covers much of the Cold War that is relevant.
Especially if (like me) you enjoyed Deutschland 83 this provides a useful historical perspective.

Another brilliant book from Taylor Downing

I love the detail in which Taylor goes into to give you the full picture.

And more detailed. This narrator should stick to his native English accent. He truly has the most annoying, embarrassing and insulting American accent. Ever. Please. Stop.

Complaints About Narrator's Accents are dead-on

The story is interesting enough, but Narrator's U.S. accents are grating. Each time an American speaks, he sounds like a weird cartoon character. I made it to chapter 8 before giving up.