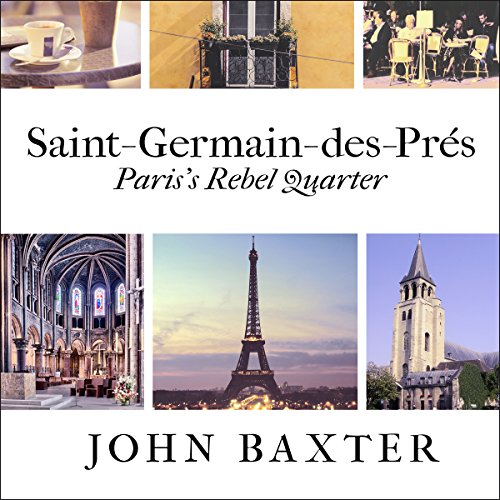 By: John Baxter
Narrated by: Graham Halstead
Try for £0.00

For many years, Saint-Germain-des-Pres has been a stronghold of sans culottes, a refuge to artists, a paradise for bohemians. It's where Marat printed L'Ami du Peuple and Thomas Paine wrote The Rights of Man. Napoleon, Hemingway, and Sartre have all called it home. Descartes is buried there. Now best-selling author and Paris expert John Baxter takes listeners on a narrative tour of Saint-Germain-des-Pres, which is also where Baxter makes his home.

Tucked along the shores of the Left Bank, Saint-Germain-des-Pres embodies so much of what makes Paris special. Its cobblestone streets and ancient facades survive to this day, spared from modernization thanks to a quirk in their construction. Traditionally cheap rents attracted outsiders and political dissidents from the days of Robespierre to the student revolts of the 1960s. And its intellectual pedigree boasts such luminaries as Pablo Picasso, Arthur Rimbaud, F. Scott Fitzgerald, Simone de Beauvoir, Gertrude Stein, and Albert Camus.

Part-history, part-guidebook, Saint-Germain-des-Pres is a fresh look at one of the City of Light's most iconic quarters, and a delight for new tourists and Paris veterans alike.

"Another delightful salute to Paris.... Whether you're planning your first trip to Paris or absolutely have to stop in Paris on your way anywhere, this book, in addition to the author's previous guides, is essential." ( Kirkus)