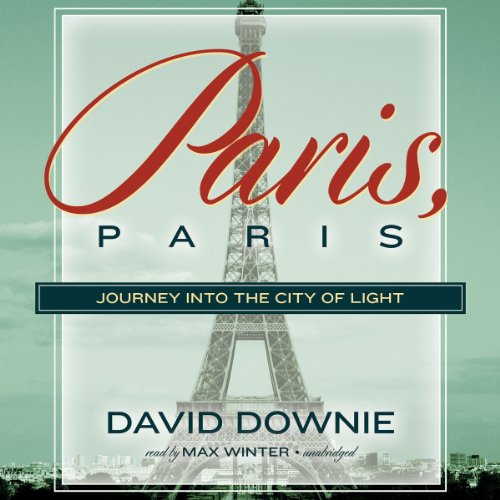 Journey into the City of Light
By: David Downie
Narrated by: Max Winter
Length: 9 hrs and 55 mins
Categories: Travel & Adventure, Essays & Travelogues
4.5 out of 5 stars 4.7 (3 ratings)

Swapping his native San Francisco for the City of Light, travel writer David Downie arrived in Paris in 1986 on a one-way ticket, his head full of romantic notions. Curiosity and the legs of a cross-country runner propelled him daily from an unheated, seventh-floor walk-up garret near the Champs-Élysées to the old Montmartre haunts of the doomed painter Modigliani, the tombs of Père-Lachaise cemetery, the luxuriant alleys of the Luxembourg Gardens, and the aristocratic Île Saint-Louis midstream in the Seine.

Downie wound up living in the chic Marais district, married to the Paris-born American photographer Alison Harris, an equally incurable walker and chronicler. Ten books and a quarter-century later, he still spends several hours every day rambling through Paris and writing about the city he loves. An irreverent, witty romp featuring thirty-one short prose sketches of people, places, and daily life, Paris, Paris: Journey into the City of Light ranges from the glamorous to the least-known corners and characters of the world's favorite city.

Great preparation for a trip to Paris

Where does Paris, Paris rank among all the audiobooks you’ve listened to so far?

It is among the best.

What other book might you compare Paris, Paris to and why?

A combination of personal memoir by someone who has lived in and loved Paris for years and well-researched information about the city, It is much more satisfying and interesting than a conventional guidebook. I will listen to it again before my next trip, as I didn't have time to get to most of the very interesting places he talked about.

It was natural and easy to listen to.

when you're longing for Paris...

There's some good information here but the writer's pretensions- mocking the people who bring gentrification (of whom he is one) and detesting contemporary architecture -- get tedious. Also, he repeated himself constantly.

Didn't listen to much

This might be a book that's better read. I'd rather go to Paris myself. Didn't do it for me. But maybe I will dip into it again.

this is very hard to listen to due to the monotony and bordom that ensues in chapter 1.