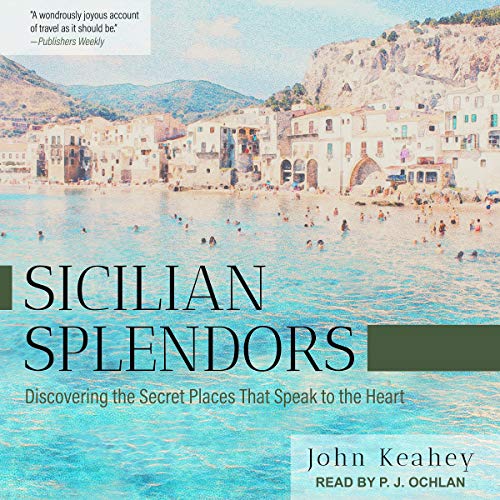 Discovering the Secret Places That Speak to the Heart
By: John Keahey
Narrated by: P.J. Ochlan
Length: 9 hrs and 40 mins
Categories: Biographies & Memoirs, Memoirs
5 out of 5 stars 5.0 (2 ratings)

From Palermo to Castiglione di Sicilia to Alimena, Sicily holds great secrets from the past and unspoken promises. Tradition, in the form of festivals, the written word, photographs, and song, reverberates through village walls. Now, slowly shaking itself free of the Mafia, Sicily is opening itself up to visitors in ways it never has before.

Sicilian Splendors explores the history, politics, food, Mafia, and people which John Keahey encounters throughout his travels during his return to Sicily. Through conversing with natives and immersing himself in culture, Keahey illustrates a brand new Sicily no one has ever talked about before.

Villagers, eager to welcome tourism and impart awareness of their cultural background, greet Keahey for meals and drink and walk him through their winding streets. They share stories of well-known writers, such as Maria Messina, who have found inspiration in Sicily's villages. Keahey's never-ending curiosity as a traveler shines light on Sicily's mythical mysteries and portrays the island not only through his eyes but also through Sicily's heart.

This is much better than the normal travelogues. The author/narrator have a passion for the island and it becomes obvious, bringing you into the journey

Small towns are a joy

I give John Keahey a lot of credit for his approach to travel. He has reinforced the direction I have taken with my travels. I have been to Sicily many times and I now have new places to see thanks to him. The smaller towns give you a glimpse of yesterday. And a feeling of being a part of it a lot faster.
I hope some day this Island finds its own direction because it can stand on its own. It has three perfect things location,location and location. I really enjoyed the book.