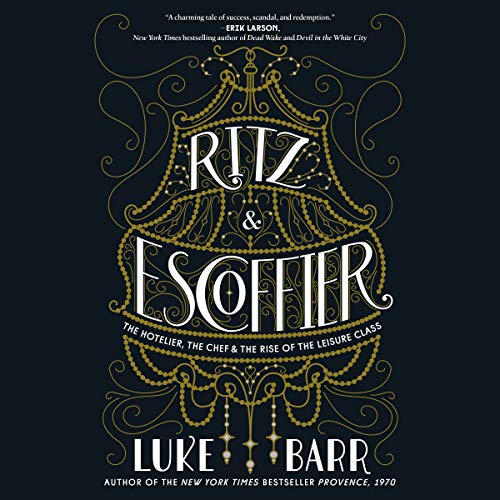 By: Luke Barr
Narrated by: Stefan Rudnicki
Try for £0.00

In a tale replete with scandal and opulence, Luke Barr, author of the New York Times best-selling Provence, 1970, transports readers to turn-of-the-century London to discover how celebrated hotelier César Ritz and famed chef Auguste Escoffier joined forces at the Savoy Hotel to spawn the modern luxury hotel and restaurant, where women and American Jews mingled with British high society, signaling a new social order and the rise of the middle class.

In early August 1889, César Ritz, a Swiss hotelier highly regarded for his exquisite taste, found himself at the Savoy Hotel in London. He had come at the request of Richard D'Oyly Carte, the financier of Gilbert & Sullivan's comic operas, who had modernized theater and was now looking to create the world's best hotel. D'Oyly Carte soon seduced Ritz to move to London with his team, which included Auguste Escoffier, the chef de cuisine known for his elevated, original dishes. The result was a hotel and restaurant like no one had ever experienced, run in often mysterious and always extravagant ways - which created quite a scandal once exposed.

Barr deftly re-creates the thrilling Belle Epoque era just before World War I, when British aristocracy was at its peak, women began dining out unaccompanied by men, and American nouveaux riches and gauche industrialists convened in London to show off their wealth. In their collaboration at the still celebrated Savoy Hotel, where they welcomed loyal and sometimes salacious clients, such as Oscar Wilde and Sarah Bernhardt, Escoffier created the modern kitchen brigade and codified French cuisine for the ages in his seminal Le Guide Culinaire, which remains in print today, and Ritz, whose name continues to grace the finest hotels across the world, created the world's first luxury hotel. The pair also ruffled more than a few feathers in the process. Fine dining would never be the same - or more intriguing.

“In this winningly-told story, Luke Barr explores the advent of the luxe life through the saga of hotelier Cesar Ritz and chef August Escoffier, whose partnership brought us not only the adjective 'ritzy', itself no small testament, but also such once-novel phenomena as hotel rooms with their own bathrooms, and innovative dishes like peach Melba. It’s a charming tale of success, scandal, and redemption - complete with an unexpected villain. Trigger alert: It will make you hungry, and a little nostalgic for bygone times.” (Erik Larson, number one New York Times best-selling author of Dead Wake and Devil in the White City)

“Such a fabulous couple of characters and such glamorous, dicey cosmopolitan milieux that Luke Barr depicts with such verve and lucidity. Ritz & Escoffier is a case study of the birth of branded luxury that reads like a dark, delicious urban spinoff prequel to Downton Abbey.” (Kurt Andersen, New York Times best-selling author of You Can’t Spell America Without Me and Fantasyland)

“So very much of what is exciting in food and hospitality today, started with Ritz and Escoffier.  They were modern for their time; they are modern for ours. Barr’s book is fascinating from beginning to end.” (Dorie Greenspan, James Beard Award-winning author of Dorie’s Cookies and Baking Chez Moi)

What listeners say about Ritz and Escoffier

Definitely worth listening to as the story is so interesting. Although narration annoying try and get past it!

What did you love best about Ritz and Escoffier?

This book falls in the category of narrative non-fiction and in this case we get two very interesting biographies plus a social history of the well-to-do in Europe in the 1890's. It reads like a novel. My favorite parts were the extreme menus Escoffier would create for royalty and the nouveau riche, and Ritz spending days creating a lampshade (electric lights were new) to best complement a lady's complexion. There are all kinds of interesting historical nuggets in this book. The narration is superb and the pace of the book is well suited for listening.

What a time to be alive!

This was a very interesting origin story to the man, the hotel, the legend that is Ritz. A man with the foresight and dedication to invent luxury hospitality. The book does a tremendous job of describing the scenes, food, and events that built the brand of Ritx. Interesting to see how many of these concepts stay true today. People complain about the showiness of the instagram age - this guy invented the concept of going out to see and be seen. Flashy consumption was invented here, modern technology has just expanded the distribution.

Also, I found it interesting to learn about other brand and taste creators that were in the same scene at the same time. Fun read.

astounding, the history and story of this piece is made alive by a great performance.

I loved this book! Very well written, with excellent narration. It “reads” like a novel. I felt as if I was there...a pampered guest at the Savoy or the Ritz.

...of the changes to society brought on by the energized brilliance and focus of two inspired dreamers of conspicuous consumption. I liked the clear and precise tone of narrator. The meals and accommodations sounded fantastic.

Absolutely loved this book. If you love food and travel, this is a MUST read!

I enjoyed listening to this tale of the man behind the name Ritz. Stefan Rudnicki has an interesting voice that lent itself well to the subject matter. I found it was best at 1.1x speed.

Two guys at the absolute top of there trade,,,,

,,,Hi,,,very informative listening, of two guys at the absolute top ,,of there trade ,,hotelier and chef ,,narration so very good,,you will not be disappointed,,, Richard Anthony Jones,,,

The Ritz IS Paris

Identified with Coco Chanel- Cole Porter- Ernest Hemingway-Princess Diana- and Elton John - the legendary Cesar Ritz still resonates as the epitome of hoteliers 125 years after his start!
Escoffier’s cuisine while legendary as well, has not held up- this is due to healthier, organic, and more simplified preparations