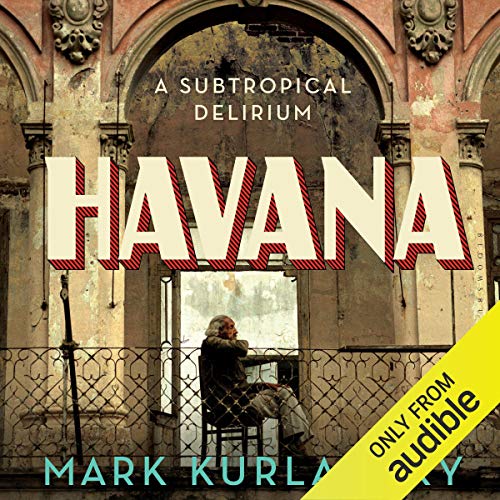 By: Mark Kurlansky
Narrated by: Fleet Cooper
Try for £0.00

Award-winning author Mark Kurlansky presents an insider's view of Havana: the elegant, tattered city he has come to know over more than 30 years. Part cultural history, part travelogue, with recipes throughout, Havana celebrates the city's singular music, literature, baseball and food; its five centuries of outstanding neglected architecture; and its extraordinary blend of cultures.

Like all great cities, Havana has a rich history that informs the vibrant place it is today - from the native Taino to Columbus' landing, from Cuba's status as a US protectorate to Batista's dictatorship and Castro's revolution, from Soviet presence to the welcoming of capitalist tourism. Havana is a place of extremes: a beautifully restored colonial city whose cobblestone streets pass through areas that have not been painted or repaired since long before the revolution.

Kurlansky shows Havana through the eyes of Cuban writers, such as Alejo Carpentier and José Martí, and foreigners, including Graham Greene and Hemingway. He introduces us to Cuban baseball and its highly opinionated fans; the city's music scene, alive with the rhythm of Son; its culinary legacy. Through Mark Kurlansky's multilayered and electrifying portrait, the long-elusive city of Havana comes stirringly to life.

What listeners say about Havana

I really enjoyed both the content and flow of this book.
It covers a long history but the author captured the important aspects.

Tough to get past impersonation of Spanish accent

The way the narrator speaks Spanish as if he is impersonating someone with a Cuban accent (with an exaggerated nasal quality, as a comedian might) is just too cringeworthy. I found it way too distracting to focus on the story. :(

I was so sorry when the book ended as I enjoyed the informative and entertaining dialogue so much. The narrator is excellent; a wonderful voice and he was so passionate that I was surprised when I saw that it was not the author himself that was narrating.

This is a perfect read for those heading to Cuba who haven’t left much time to research the history and culture. It will enrich your visit and give you a better understanding of the country and its people. Loved the anecdotes and there were even a couple of recipes thrown in!

Havana was Nice, But Salt is Better

I've been an avid listener of Mark Kurlansky's work, so I was doubly excited to hear that this book was released and it was a decent departure from the Salt/Basque storyline that I've so enjoyed from the earlier books.

While Havana is interesting in its coverage of the relatively tumultuous history of the city, it doesn't have the same feel as Kurlansky's other work. I'm not disappointed, this book definitely gave me a better feel for the deep rooted place Havana holds in American Culture (Sloppy Joe's!)

Amazing tale of an amazing island!

Mark Kurlansky's sometimes oddly specific topics make for perfect audio books and this is no exception. Fantastic tale of revolution and romance!