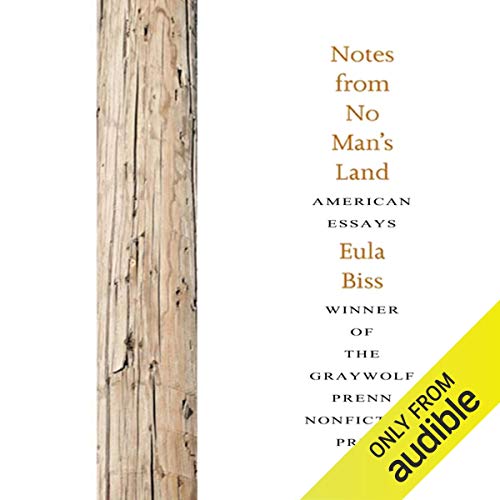 Notes from No Man’s Land

Notes from No Man’s Land

Winner of the National Book Critics Circle Award for Criticism

A frank and fascinating exploration of race and racial identity

In a book that begins with a series of lynchings and ends with a series of apologies, Eula Biss explores race in America. Her response to the topic is informed by the experiences chronicled in these essays - teaching in a Harlem school on the morning of 9/11, reporting for an African American newspaper in San Diego, watching the aftermath of Katrina from a college town in Iowa, and settling in Chicago’s most diverse neighborhood. As Biss moves across the country from New York to California to the Midwest, her essays move across time from biblical Babylon to the freedman’s schools of Reconstruction to a Jim Crow mining town to post-war white flight. She brings an eclectic education to the page, drawing variously on the Eagles, Laura Ingalls Wilder, James Baldwin, Alexander Graham Bell, Joan Didion, religious pamphlets, and reality television shows.

These spare, sometimes lyric essays explore the legacy of race in America, artfully revealing in intimate detail how families, schools, and neighborhoods participate in preserving racial privilege. Faced with a disturbing past and an unsettling present, Biss still remains hopeful about the possibilities of American diversity, “not the sun-shininess of it, or the quota-making politics of it, but the real complexity of it.”

"A collection of wildly inventive essays about race from the point of view of a white female writer whose research into the history of telephone poles yielded a record of 2,354 New York Times articles published between 1880 and 1920 about lynchings." (Kyle Minor, Salon)

"Traversing an isthmus between white America and nonwhite America, she notes her own, ample opportunities, yet refuses to relinquish the struggle for racial identity to those that have traditionally been more oppressed." ( Columbia Journalism Review)

This collection of sharply observed essays on race and racial identity in America weaves autobiographical and historical elements you've never seen before.

Biss observes hypocrisy without throwing around accusations, becoming all the more persuasive for it.

Her words draw you in, to look through her eyes and to follow her agile mind, finding connections where you may not expect them.

Well Written (If Not Well Thought Out)

Eula Biss is a talented writer with interesting life experiences, and many of the essays in this collection are lyrical explorations of her thinking. With the theme of race interwoven throughout her writings, this makes for a thought-provoking book, and one capable of passionate discussion, e.g., in a book group.

That said, the author seems to use the personal essay format as permission to put forth her most superficial views, often poorly researched if at all. For example, she begins the book by stating the oft-repeated conclusion that there is no biological basis for race, which is therefore a purely social construct. Even the most casual research shows that this is wishful thinking and scientifically incorrect (see, Race Is Seen as Real Guide To Track Roots of Disease, By Nicholas Wade, Published: July 30, 2002 in the New York Times). What the author means is that the biological differences are exceedingly minor and cannot support all the behavioral claims or segregationists, etc., but this is no excuse to misstate facts. Similarly, the author later boldly states that the historical record is completely devoid of documentation of a certain practice, as if she has actually reviewed the historical record in its entirety.

Personally, my aha moment was realizing that racism can be thought of as merely a subset of the more general shunning of otherness. And this is why I think of the book as, at best, a well written series of essays based on the most lightweight analysis of the purported subject matter. The author describes some of the most atrocious examples of racism, but seems to see these only as stemming from the bad traits of certain members of the currently predominant racial group—rather than something universal in the human condition. This produces a lot of guilt on the author’s part, but little understanding much less any prescription for improvement.

Perhaps I owe the author thanks for making me think about this by writing much I found to disagree with.

a white woman's view in race in america

A collection of autobiographical stories by a white ally, possibly one of John Brown's great grandchildren.
The narrator, like the author, was female and gave the best performance I've heard on Audible.

I had to read this book for one of my college classes and I thought the story was interesting and it was a good read.

I really like this book. Biss explores many issues of the American experience. The narration seems incongruent.