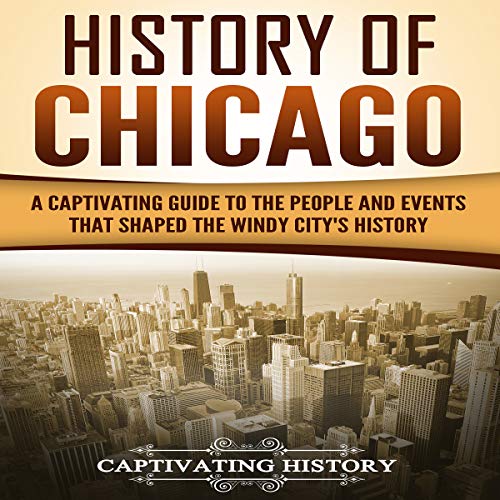 History of Chicago: A Captivating Guide to the People and Events that Shaped the Windy City’s History

History of Chicago: A Captivating Guide to the People and Events that Shaped the Windy City’s History

Explore the captivating history of Chicago

Founded as a tiny, temporary settlement, Chicago became a crux of the American fur trade before growing into one of the powerhouses of the Industrial Revolution.

From procuring drinking water to implementing racial equality, nothing has ever been simple for the people who have called Chicago home - and yet there is immense pride among Chicagoans for what they and their fellow people have achieved.

The city has been home to some of America’s most influential people, be they talk show hosts or US Presidents. Every star on the Chicago flag represents an achievement to be remembered; every building an era that has helped shape the modern city into what it is today.

In this book, you will discover remarkable stories of people and events who shaped the history of this fascinating city.

History of Chicago: A Captivating Guide to the People and Events that Shaped the Windy City’s History includes topics such as:

So if you want to learn more about the history of Chicago, buy this audiobook now!

City of the century...

Definitely a considerate and informative scholarly work worth reading. While it may not appeal to the unpremeditated reader hoping for something that takes full advantage of Chicago's more than colorful history it is a resource that anybody needing to understand this city should employ. The book thoroughly traces the various forces that shaped the growth and evolution of Chicago.

I received the Chicago version of this book as a gift and decided to visit the city ASAP. For anyone who is interested in seeing architecture or neighborhoods as they look now and what they used to look like, it's a fascinating read. Just enough history is included as to not make the reading tedious. Also there are books of other major cities as well.

This book is full of great descriptions of Chicago! It's one of my favorite city to live in. I highly recommend it for everyone who love this city.

Good book for memories of growing up in Chicago

Beautiful book to understand history of Chicago. I like the comparison of old and recent not city of the same locations and buildings. A great gift for someone who grew up in Chicago. My old dad is enjoying it!

Several times, the narrator seems not to understand the words he's reading. One does not need to listen closely or long to hear these. Seriously, a whole chapter on Queen Oprah? And not just history, more like a PR blitz. Overall, nothing special. I'm sure (read I hope) better stuff is to be found.

entertaining, but glosses over or omits key points

enjoyed this book, but noticed it glosses over some key points. the author clearly favors Richard M Daily and never mentioned objections to his leadership choices. also, the objections to the Obama presidential library location were never mentioned. it is a brief history, so choices had to be made as to what to include.

Really informative! We listened to on the way to Chicago- perfect for tweens to hear

Interesting book and very good as a gift too!

Interesting book and very good as a gift too! I love this book. I wish it was a smidgeon larger for a coffee table statement, but overall, it is a great book.

I have a great love of History.

I love the books! This was a gift to a friend who recently visited Chicago for the first time and took both hosted and self-guided tours. She loved this book and so did I.I have a great love of History, specifically ancient and Chicago!

My dreamland the Chicago city.

I just moved to my dreamland, the Chicago city, all though I have known and loved the town for many years. This book is a great coffee table intro and a very reasonable price. Additionally, yes it gave me many new things to live in the city with peace.

Gift for a native Chicagoan...

I love this book, I like the wider version better for the image of the city old and new but I like how this one is compact and easy to find a place for it.

Very nice book. It is in superb descriptions as advertised. The text, not surprisingly, is dry. Nonetheless, the period descriptions are superb especially when placed in juxtaposition of the current day views of the same scene. It was definitely a worthwhile purchase.

Though there are descriptions honoring more well-known historical bits of the city, several of the later chapters become more person centered on people you’ve never heard of. It is the voice of the people of the city, more similar to oral history like Studs than Howard.

One of my favorite history books. A really perceptive and influential narration of the history of the best city in the world. The author is an amazing and inspiring author. Can’t wait for his next book.