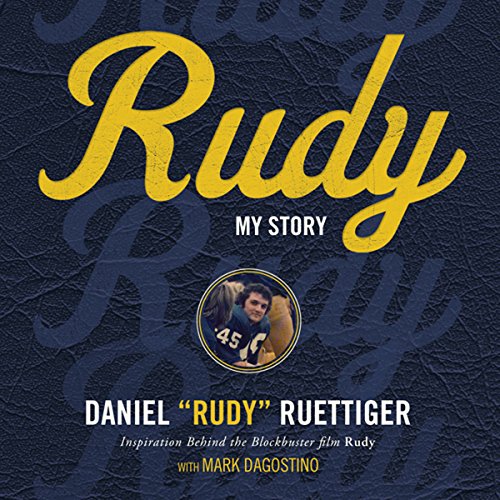 By: Rudy Ruettiger
Narrated by: Daniel Butler
Try for £0.00

The inspirational real-life story of the man behind the beloved movie Rudy, his continued determination to make his dreams come true, and how you can dream big too.

How does a lower middle class kid, who suffered through school with undiagnosed dyslexia, get into Notre Dame and become the inspiration for millions in a Hollywood film that has become one of the most inspiring sport movies ever made? He never gave up. For the first time, read Daniel "Rudy" Ruettiger's real life story and learn the behind-the-scenes details of the ten years it took to make the movie and how that tossed him into a new career of public speaking that continues on stages today alongside world-class leaders and speakers. Divided into four parts, each include details of the failures and hard lessons he's learned along the way and how hitting the reset button was often the best thing that ever happened to him:

Launched into a new world, Rudy finds his true calling as an inspirational speaker and reveals how losing site of his own dreams nearly derails him, but how once again, in learning another of life's most important lessons, he finds a reason to hope again—through the eyes of the next generation of Rudys Rudy doesn't represent some far-fetched Hollywood fantasy that most people can never attain—the power of his story comes from the fact that at heart he's just an “Average Joe.” The moral is that anyone with a dream can make that dream a reality—as long as they’re willing to put in the hard work, and heart, it takes to get there.

What listeners say about Rudy

The rest of the story...

I am a huge fan of the movie, Rudy. I watch it again and again. After Rudy passes under the goalpost and the credits begin to roll I am always inspired to take on the world . With the soundtrack still playing in my mind, I take stock of my own life and my dreams. I look at what I have achieved since I first viewed the movie. I wonder what has happened to Rudy and his family. I wondered if he continues to pursue his dreams or if he simply stopped dreaming after the lights dimmed on the movie set. This audiobook fills in all the blanks.

Rudy, couldn't have picked a better time to write this book. Today in the United States, the American Dream to succeed, is trampled on ever day. Young people see no hope to their future, have no faith, no work ethic and no dreams. This book is a powerful reminder that there is hope and with faith in God we can still achieve our dreams. It may take a little longer in these hard economic times. We may have to work a little harder and God may take us down a path or two we maybe didn't expect but, as with Rudy, miracles will happen as God has a plan for each one of us that we can't see. After all, God's gift to us is our talents and what we do with those talents is our gift back to Him. This audiobook reflects that at its very heart.

Rudy is still dreaming and still inspiring others to dream. This book captures a life before, during and after the cameras stopped rolling on that chilly day in Notre Dame stadium. Listen to this book yourself and gift it to anyone you know that needs inspiration. Especially to that young person who is drowning in social media or video games, substance abuse, has failing grades and is void of all direction. It isn't about Football but about setting and achieving your goals.

Daniel Butler has done an excellent job of bringing Rudy's words to live and you will find it a joy to listen to.

Best audiobook I’ve listened to. Loved learning the facts about Rudy, and the making of the movie. Very enjoyable listen Outstanding narration.

More story behind the "Rudy" movie

Loved it! Now you know the rest of the story! Very Inspirational. Never to Kate to make a difference in your life.

i love rudy!! book is always better than the movies never knew he was a navy man

Phenomenal !!!! RUDY’s Story is Magnificent in every way!

I have read an extremely large number of books:
THIS IS MY NEW FAVORITE BOOK! This book is AWESOME! Amazingly written by Mr. Ruettiger and superbly narrated by Mr. Butler! I almost feel that I need to pay more than I did for this audiobook, considering the feelings and impact it has had on me already!! Get it!! It’s AWESOME !!

Definitely a feel good story. I love the way Rudy made sense of the school system... I had similar experiences in school that I had yet to figure out till I read this. I love how he just walked towards all those goals like there was nothing to lose. I love how he talks about how rough it was, how so many things didn't work out from time to time, how the leeches showed up at every corner when he was trying to launch his movie... even a priest was trying to blackmail him! He persevered in spite of it all. My review doesn't touch all the wonderful things I got from this book.

Worth reading if you have seen the movie

Wow everything is possible

This is a great uplifting message. Got me off your but a day started on the path to fulfilling MY dream. Love. Love. Love this book!

Go after your dreams

Great book. Great story. It's not about football, it's about life. Very inspiring. Thanks Rudy!