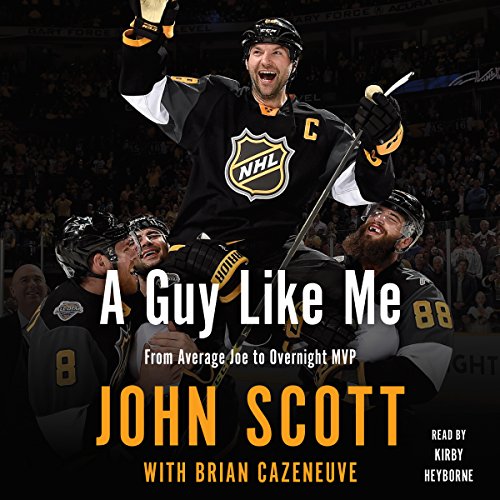 By: John Scott,Brian Cazeneuve
Narrated by: Kirby Heyborne
Try for £0.00

The John Scott story is the ultimate underdog narrative in sports during 2016 when Scott - in the twilight of his career - went from a joke All-Star fan-voted nominee to scoring two goals and winning the All-Star Game's MVP title. This is his heartwarming story about an average Joe who became a sports superhero overnight.

Known as a willing-and-able fighter and bruiser in the league, John Scott was a surprising and tongue-and-cheek nominee for the 2016 NHL All-Star Game. He'd been in the league for over eight NHL seasons, playing for teams such as the Wild, Blackhawks, Rangers, Sabres, and the Sharks. Scott's best attribute as an NHL player was dropping his gloves - never the best player, the 260 pounder did become the most feared fighter in the NHL, racking up extensive penalty minutes. In order to prevent him from playing in the game, his current team - the Phoenix Coyotes - traded Scott to the Montreal Canadians, who demoted him to the AHL team in an attempt to disqualify him from playing in the All-Star Game. Fans were outraged and Scott was devastated. He'd been downgraded in his job - forced to relocate while his wife was pregnant with twin girls. But the fans wouldn't back down and insisted the NHL let Scott play in the game. The league relented, and Scott not only was invited to attend the NHL game in Nashville, but was nominated a team captain. The media and sports fans at large fell in love with the giant six-foot-eight player who by all means, was just a normal guy and no superstar player. In a true Cinderella story, Scott scored two goals and was the All-Star Game's MVP. This is his personal memoir - detailing his life growing up and how he was able to keep his sense of humor and become the ultimate Cinderella-Story of hockey.

Worth a listen for a Hockry fan, but that’s it

Not much insight into the world of Hockey. Feels like it’s been written with a ghost writer, but by far the worst thing about this is the guy reading it. He’s awful, I wish Scott had narrated it himself like Avery did with his. They guy narrating this is awful, if you are going to narrate a book about real people at the very least, learn how to say their names. I don’t think he pronounced one right. It’s read with very little energy or passion. This is the first time I have ever felt like this about an audiobook from audible. So far everything I have listened to has had excellent narrators, even if the book itself hasn’t been that great.

The last two chapters are the only two worth listening to to be honest, and, unlike better books like Dryden’s or Avery’s by Hockey players, this would only be of interest to Hockry fans.

Who might you have cast as narrator instead of Kirby Heyborne?

would have been better if John Scott narrated

Great story, loved hearing about his life and career. Just wish he would have narrated instead.

Great story, not a great reader

As a hockey fan, I was really pleased to get to listen to John Scott's great story in his own words. But the performance leaves one wanting. Kirby's diction is so precise that he sounds robotic and stilted, and he mispronounces many, many names, which is distracting and irritating. He should have made a point to get informed before his performance.

What a fantastic and inspiring story. John F'n Scott for President!! IF there was any downer it was that the reader didn't bother to pronounce the names properly... but other than that it was epic;;;

They need to get a reader that knows how to pronounce the names of the players. It’s hard to listen too. Great story though

John Scott’s story is very good and I highly recommend it! But I was highly dissatisfied with the narrators voice and the way he butchered the pronunciation on so many hockey’s greats names! It would have been great if John just read this book!

This is a must read for about hockey fan. John Scott, an ordinary, hard working guy who ends up on the biggest stage in hockey. This is how he got there. The reader however is less than desirable. Ok... awful! Why didn't they just get John to read his book???

The story was enjoyable and well written.

The performer, however, was frustrating. Whomever paid Kirby Heyborne to butcher the names of HOF athletes should be ashamed as well as the person who signed off on the recording. You can't tell me he didn't do his homework since he repeatedly pronounced Dustin Byfuglien perfectly yet Patrick Roy, PK Subban, and Antoine Roussel were too difficult to learn?

I would have recommended this to others, but I would feel guilty for assaulting their ears with an ill informed reading.

I really enjoyed this book and John's story. I have a huge gripe in that the narrator was awful. How can you mispronounce almost every players name? did anybody listen to this before releasing it? also this is the story of a hockey enforcer told by a man with a very soft and effeminate voice it just doesn't go. that aside it was worth the read.

Have the author read it

This is a great story that deserves a far better narrator than it got. It's clear the narrator doesn't know hockey with the countless mispronounced names and locations also he is ridiculously monotone.

I'm sure the author John Scott would be more than happy to read it. Please get a new narrator!

You can take lots from this book lessons on faith and commitment, honouring self and standing up for your values. John talks about what i’d consider a darker side of the league when talking about his all star experience enough so that a dedicated fan of 30 yrs can be blown away by how corrupt it seems.