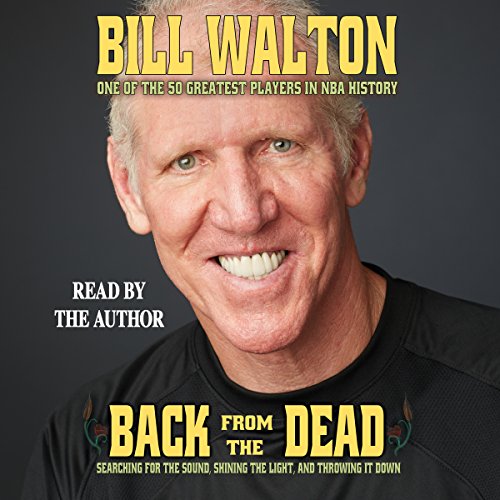 Back from the Dead

This inspiring memoir from sports and cultural icon Bill Walton recounts his devastating injuries and amazing recoveries, set in the context of his UCLA triumphs under John Wooden, his storied NBA career, and his affinity for music and the Grateful Dead.

In February 2007, Bill Walton suffered a catastrophic spinal collapse - the culmination of a lifetime of injuries - that left him unable to move. He spent three years on the floor of his house, eating his meals there and crawling to the bathroom, where he could barely hoist himself up onto the toilet. The excruciating pain and slow recovery tested Walton to the fullest. But with extraordinary patience, fortitude, determination, and sacrifice - and pioneering surgery - he recovered and now shares his life story in this remarkable and unique memoir.

Walton grew up in San Diego in the 1950s and 1960s and was deeply influenced by the political and cultural upheavals of that period. Although he strongly identified with the cool people, particularly in music and politics, his greatest role model outside his family was super-straight UCLA basketball coach John Wooden, a thoughtful, rigorous mentor who seemed immune to the turmoil of the times. Although there was always tension and conflict between them, the two men would speak nearly every day for 43 years, until Wooden's death at age 99.

Despite a lifelong stuttering affliction, Walton chose a career in broadcasting after his playing days ended. He eventually won an Emmy Award and other accolades for broadcasting and was recognized as a leading media pundit.

John Wooden once said that no greatness ever came without sacrifice. Nothing better illustrates this saying than the real story of Walton's life. In his own words, Back from the Dead shares this dramatic story, including his basketball and broadcasting careers, his many setbacks and rebounds, and his ultimate triumph as the toughest of champions.

What listeners say about Back from the Dead

Fantastic & Fascinating. Nothing Will Ever Be The Same Again!

Bill in all his splendour! If you aren’t aware of Bill’s ups and downs this is a must read. If you are, it’s still a must read!

This is one of my all-time favorite audiobooks. I love hyperbole and enthusiasm and this book qualifies as both. I found myself delighted through the whole book. I happened to be at many of the games referenced so the memories were great.

Bill does a good job reading and his excitement for life is contagious. While this book did give some insight to his personal struggles and beliefs, I finished still thinking there was a lot of substance missing from the stories told. It allows appeal to a broader audience, but as one who has read numerous books on the lives of athletes, I think he left a lot of the details out as to not offend.

However, for Bruins, Blazers, or Celtics, this is a fun ride down memory lane. ...and Bill does make you a better person.... He shares his caring spirit and that compels you to pass it forward.

A book for anyone who loves basketball and life. Commands multiple listens! THROW IT DOWN

If you could sum up Back from the Dead in three words, what would they be?

What was one of the most memorable moments of Back from the Dead?

The best part of the story is actually listening to Walton tell it!

The recitation of all books I have listened to

Would you listen to Back from the Dead again? Why?

I'm an UCLA alumni and a Bill Walton fan. His amazing story was first chronicled by The Great David Halberstam in his book Break of the Game. In this book Bill being extremely modest never speaks of his own greatness in the game of basketball. For that you need to read David Halberstam's book. With the background of Halberstam's book you really appreciate Bill's modesty never mentioning how great a player he was. Bill is a true champion, he never gave up. Reading his incredible struggle with his health is truly inspirational.

I loved Bill reading the book. His passion is so infectious. It's by far the best read book in my library. I have over 150 books in my library. No other book is even a close second.

The scene with the found penny.

Why the hell didn't Charlie Rose interview Bill for his book?

Thanks for sharing your stories in Back from the Dead. You have had an amazing life. Add great narrator to your list of accomplishments. Your friend in the box business.

Amazed what he went through

Good story, crazy what he went through. To still have such a positive outlook after so much physical pain is remarkable.

Very enjoyable. I love listening to Bill on the television, his story telling and passion for the game come through on every broadcast. His love of live, sportsmanship, family and friends are infectious and having Bill tell his story was moving and made me both happy and sad at the same time. I'm only old enough to remember him as a shell of his former glory after his body started to break down due to his feet and the misdiagnosis by team doctors when he was on the Celtics. I knew he was a good player but I didn't realize he was that good. Great person, great story, and a very enjoyable listen. A+