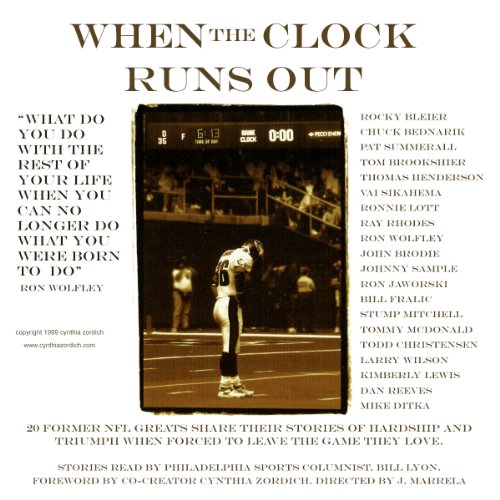 When the Clock Runs Out

What do you do with the rest of your life when you can no longer do what you were born to do?

Through one-on-one interviews, this evocative collection of life stories explores the bittersweet tales of some of the NFL's most famous men, including, Mike Ditka, Hollywood Henderson, Ron Jaworski, Ronnie Lott, Dan Reeves, Rocky Bleier, and Pat Summerall. Co-creator Cynthia Zordich, wife of former pro safety Michael Zordich, had the presence of mind to dive into a world yet traveled and ask questions of those who had already left the game. Teaming up with Philadelphia sports columnist Bill Lyon, they unveil the honest reality and hardship of letting go.

Directed by Joe Marella with the foreword by Zordich and the stories by Lyon, When the Clock Runs Out offers a sideline pass to a seeming reality - football players die two deaths. The stories are raw and with them comes the understanding of why leaving the game is difficult and sometimes crippling for those who play at the highest level.

What listeners say about When the Clock Runs Out