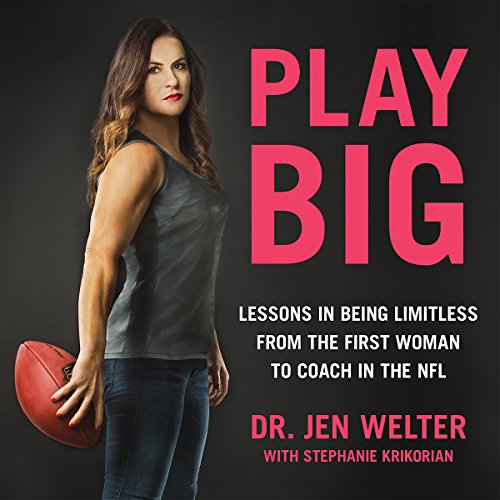 Lessons in Being Limitless from the First Woman to Coach in the NFL
By: Jen Welter, Stephanie Krikorian
Narrated by: Jen Welter
Length: 8 hrs and 40 mins
Categories: Biographies & Memoirs, Memoirs
5 out of 5 stars 5.0 (1 rating)

When Jen Welter became a linebackers coach for the Arizona Cardinals in 2015, she was the first woman to ever break the glass sideline of the NFL. In Play Big, Welter reveals the grit that it took to be a trailblazer in the ultimate boys' club.

Pre-NFL, Welter was an undersized, underestimated athlete who made sacrifice after sacrifice to acheive her football dreams - rising to the top of women's football leagues and eventually daring to play against men twice her size. Play Big lays out how she succeeded despite the odds, through force of will and determination, revealing the wisdom Welter gained over countless setbacks and challenges. With vivid wit and candor, Play Big will coach you to do the same - whatever your obstacles might be - while translating Welter's hard-earned advice for cultivating true perseverance and toughness.

"When I met Jen, I saw the passion in her. Not just in her voice or a particular word she said-in her whole person. It was easily recognizable that the insights and experience were there. Her resume spoke for itself. But her enthusiasm about the game, her expertise, and being able to teach what she knew, I thought was very evident in the first meeting. That's why I hired her. Anyone reading this book will be inspired by her drive and learn from her journey. She has a different perspective on how to teach that extends beyond the field." (Bruce Arians, Arizona Cardinals head coach)
"Jen Welter is a master of change, not only for the NFL but for women in society. I'm proud of everything that she has done to change perception and reality for the next generation. Jen is a force and is one of the most qualified people I know on change." (Nancy Lieberman, Sacramento Kings assistant coach, Basketball Hall of Fame Member)

A must read for parents of girls and every girl

What made the experience of listening to Play Big the most enjoyable?

The humility and authenticity of the author`

What other book might you compare Play Big to and why?

Same premises as Landmark Forum, for taking responsibility for your life and being open to limitless possibilities.

Story of not being picked up full time by Arizona as coach. The grace and dignity that Jen accepted this was admirable. I could feel her disappointment, then saw her not only rise above it but soar above it. A truly remarkable woman.

This book is a guide to raising girls or growing up in today's society as a girl, with the focus being on growing up as a PERSON with limitless possibilities, just by being authentic and who you are at the core. So many golden nuggets of information to keep in your hip pocket.

Love Jen but not book

Jen is a very accomplished woman and I have the utmost respect for her. If you aspire to achieve results in your career I highly recommend the book. I love football so reading about her was something I was looking forward to. The book jumped around a little bit so i had a hard time with the time line. I also felt there were a lot of cliches. What I enjoyed the most was her romantic relationship and how she got caught up in it. A controlling jerk who was emotionally abusive - though that wasn’t the premise of the book I felt she could have given us more. Many powerful women fall prey to this type of abuse.

Great story about not giving up and doing what you love. What an inspiration story