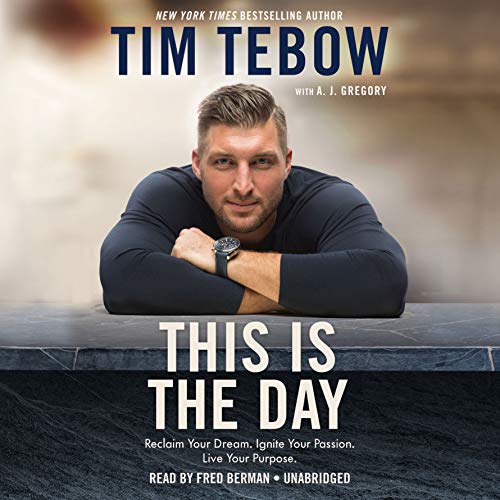 This Is the Day

By: Tim Tebow, A. J. Gregory
Narrated by: Fred Berman

The New York Times best-selling sports star and media icon motivates listeners to stop postponing dreams and start making them happen now, because - this is the day.

Beyond Tim Tebow's exploits as a Heisman-winning football player, he is widely known and respected for his exemplary character and personal excellence, which have made him a role model for millions. When Tim interacts with the public, he often encounters people who feel "stuck" - unable to take action on matters ranging from daily life to pursuing lifelong dreams. In response, Tim often identifies a crippling fear or lack of courage, to which he advises: "Now is the time to take some risks, to quiet the voices of defeat, to step forward and make a mark, because this is the day."

In this inspiring, motivational audiobook, listeners will receive the advice and encouragement to daily move from "pause" to "play" in finding deeper meaning and success. Tim illustrates the audiobook's themes with stories from his personal life that will delight all listeners, including his an update on his dream pursuit of a baseball career.

“People have said that I’m frugal with my praise for others. Perhaps it’s because I always expect those around me to give their best. Unfortunately, it’s a fact that always giving our best is not in our nature. Rather, it’s in our nature to take the easy way out. Being better than that and giving our best every day with a positive attitude is what makes us special. This Is the Day puts that notion in perspective. Tim Tebow gives the reader tools to make one’s goals and dreams a reality. I admire Timmy as a friend and a philosopher of the game and life. He speaks from experience and from the heart.” (Nick Saban, head football coach, University of Alabama)

“I know it can be challenging to live with passion or to stay motivated. Through personal experience and heart-warming stories, my dear friend Tim Tebow shows you how. Learn the little and big changes you can make to transform your life and, in the exciting process, impact the world around you!” (Robin Roberts, Good Morning America)

“Often, we connect the phrase ‘follow your dreams’ into self-oriented goals we want to accomplish. Tim Tebow is all about living your dreams, but in a way that’s meaningful - not just to become rich or famous or to look or feel good. This Is the Day is about becoming the person God created you to be and living a life filled with purpose.” (Richard Petty, seven-time NASCAR Championship winner)

What listeners say about This Is the Day

great book and inspirational to live a more fulfilling life. highly recommended to any age group or social group

Remind yourself how much is not up to you

I do the audio book version of this and at times I had to pause to take and what was described.

Tim has some very powerful stories of interacting with incredible people from all walks of life.

His passion and faith left me realizing how much I can offer to help others and prioritize things in my life more.

Loved it! Narrator was great and has a smoothing voice. Everyone should definitely check this out.

Tim is the real deal. His stories are inspiring and convicting. He lives courageously which results in confidence when made habitual. Hope I get to meet him someday. If not, then in heaven.

Spot on Message! Only disappointment was that Tim didn’t do his own narrating. Other than that, anointed.

I really wanted to like it, but couldn’t make myself finish it. There was such a disconnect for me between the story and the narration. I probably would have loved it if Tim Tebow had narrated it himself.

Let me be clear, there was nothing wrong with Fred Bergman’s narration except I kept expecting/anticipating Tim Tebow’s voice.

A known personality with a distinctive voice would have brought more depth and made connecting easier.

Tim
Huge fan and very active in Me ‘s Ministry and Prison Ministry for over 30 years. It would be so awesome to put this book or even a condensed version or a study guide in the hands if inmates who are looking fir answers for their life. Like you, God has placed a love for me in my heart to love and accept these men who the rest of the world would line to forget.

Thank you for your passion and love God has given you to touch others less fortunate.

l feel Blessed, easy to listen to. Centered me.

This book was easy to listen to. Reminded me to stay centered and trust in God's plan.

I have read two of his other books and really enjoyed this one. It is inspiring and empowering. Makes me want to start a non profit to help my nephews. Keep up the hard work Tim. If you have read over 50 self help books there is not much new in this one. However putting in the Christian perspective helps me stay aligned with my values.

Thank YOU Dear GOD for Tim & YOUR WORDS through him. A True Gift & Blessing. 0:)

Will be one I will listen to many times.

So many nuggets to take away from each chapter. Has motivated me to make some changes in my life in business , my health, and my faith. This was a valuable to me mid way though life, but even more to High school and college aged people. Buy it, This is THE day.