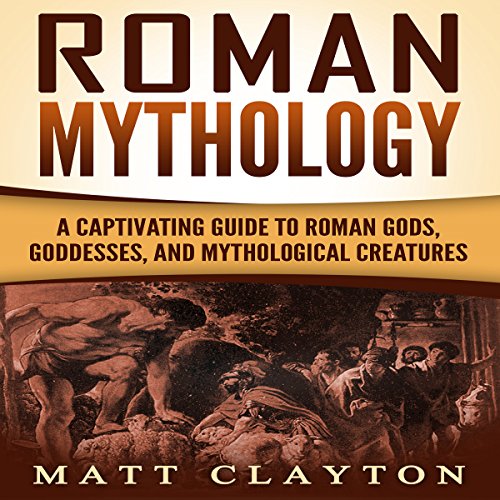 In this audiobook, you will discover many fascinating aspects of the Roman gods, goddesses, and mythological creatures. Each of the first six chapters begins with a narrative scene which helps bring the legendary and mythical characters to life.

In chapter one, you will find the seeds of legitimacy that Virgil planted regarding the Trojan connection to Rome. In chapter two, you will learn about the foundation of Rome by the semi-divine, wolf-suckled brothers, Romulus and Remus. This chapter will also explore the myth of Aeneas’s son.

In chapter six, the audiobook will investigate the Celtic influence and see how the gods of the Celts were melded with the Roman pantheon in creative ways. Finally, in chapter seven, you will discover the potential truths behind the Roman gods, goddesses, and creatures. Every myth had a beginning, and in this chapter, we explore some of the possibilities.

Just some of the questions and topics covered in this audiobook include:

Listen to the audiobook now and learn more about Roman mythology!

What listeners say about Roman Mythology

An excellent book on Roman Gods,Goddesses

The book Roman Mythology by Matt’s is an excellent book on Roman culture. It is updated to recent facts and is extremely easy to find information. It not only contains the names of hundreds of Greek and Roman gods and goddesses.

This is a concise, neatly arranged history of the Roman Empire, describing the founding of Rome, its expansion, and its collapse. It includes information about Roman culture, architecture, technology, religions, its emperors and Goddesses, and Mythological Creatures.

Show the depth of human emotions!!!

I truly love the book and would've returned it, however, it is the examples of the Roman Gods and Goddesses that are very hard for me to compare to. I would purchase this book again but may be applied rather of fresh.

The Romans came from a city and went on to dominate their world. Their influence is still with us yet, generally, little is known about them. Covers all aspects of Roman life and history, their Gods, Goddesses, and Mythological Creatures and all about.

Children love Greek and Roman myths for all their action, magic, and adventure. Not only are they fun, but these myths have played a crucial role in the formation of our culture.

Gods, Goddesses and their myths!!!

There is a lot of detail in here, Roman Gods, Goddesses, and Mythological Creatures, mythological beasts and the Ancient Greek.I have come away from listening to this, with a comprehensive knowledge and understanding all of these Gods.

Learned many things about the life of the Romans during their successful height of power. I found that in many aspects, they I were very similar to us today.Learn more about Greek and Roman Mythology with this comprehensive and fully illustrated book.

It manages to deliver a lot of information in very little time with the practically decorative language and it's so clearly written that this is great overwhelming. Highly recommended.

Informative book about the history

An educational book about the history of Roman mythology. The book has extra information on Roman mythology, the gods and goddesses and all of the fabulous individuals. This book should be part of the education system.

A true guide for history lovers.

I read about this in my school days so when I saw this book I immediately decided to download this. This was an Interesting read the way the mythology was tangled with the history to designate where and why the stories might have happened.

I LOVE this book. I am really into Roman Mythology and wanted to learn more about the society of mythology and familiarize myself with the gods and this book does just that.I definitely recommend!

I have forever been involved in Roman mythology and this book was very interesting. I liked the way the writer wrote the book, it's clear to explain and understand.Thank you...

It gives great basic knowledge of the Roman gods and, surprisingly, My son enjoyed listening to it. He usually does not like learning or listening so this was a bit of a wonder.

A concise presentation of the many stories and Gods that made this religion so compelling for so many for so long. A truly beautiful version of the definitive collection of roman mythology.The ancient myths carry all the universal themes that man still aspires to and struggles with.

A delicious treat for anyone who loves the genre.

Legends, myths and the gods snd goddesses always fastinated me. I just never found the time to enjoy them. I am fulfilling my chance. Love this book.

Excellent for Homeschoolers or just if your child or even yourself want an overview of Mythology. Art work is gorgeous and stories are complete without being terribly in-depth. Very good book about the different Greek Gods and Goddesses.

It's best to be picked up

A good book to explain on Mythology. Brought me back to my college days where this book was a focal point of a History class. It's best to be picked up.

Exactly what I was looking for. This book is pretty organized and is fabulous for those obeying the religion Romana because the link between the ancient Romans and their gods was nice and organized and a lot connected to specific workouts.

If you have children into the stories that follow Roman Mythology, this is a great book for them to become informed with. I have forever liked all types of mythology and I think that kids have an actual interest in it.

So far I have read two of the mythology books and have found them both informative, easily digested, and vastly entertaining. The linkages in this book make for a wide range of additional historic resources for a teacher to use. I think the only addition I could see is a teacher handbook version with a bibliography and questions to ask.