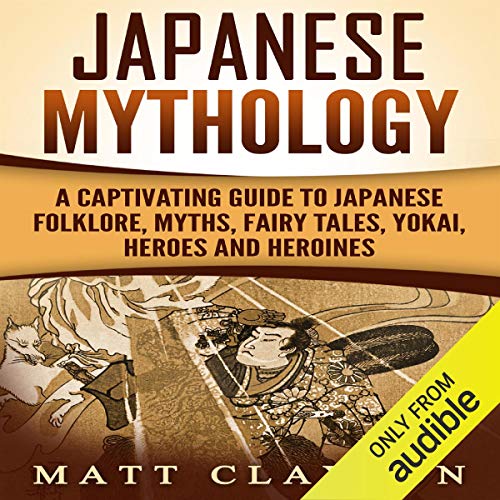 By: Matt Clayton
Narrated by: Dryw McArthur
Try for £0.00

The study of mythology and folklore is a peculiar one to the extent that we are looking into things which are generally regarded as untrue yet critically important to a culture. We are also taking on the study of the “lore of the folk”, and this faces us with the question of exactly which folk we are talking about. Japan, of course, is a single nation, but its origins are so old, and often, so fragmented, that unified mythology and folklore can be difficult to point to. Still, in all, there are some key texts, tales, and characters we can focus on which will give us a pretty good sense of Japanese mythology.

In this audiobook, you'll discover stories of mystery, horror, and romance while simultaneously learning about the Japanese culture.

Within this audiobook, you'll find the following Japanese myths and topics covered

Get the audiobook now, and learn more about Japanese mythology

What listeners say about Japanese Mythology

This book is awful. It’s like it’s been read by google translate. The punctuation, grammar and sentence structure make this book extremely hard to follow, understand or absorb. There are long pauses, usually before Japanese names which makes it seem as though it’s the first time the narrator has ever seen them. Mistakes have not been edited out, they’re just included in the production. Avoid.

A summary, nothing more.

So stupidly short. I understand that japanease mythololgy is vage but having listened to this book, I have been left disappointed. Intensly short. like going to watch a movie but only getting the trailer instead. Pathetic. highly recommend you take your credit/money and pick up Scott Lewis's mythology omnibus. not only will you get a more detailed and interesting take on japanease mythology, but you will get a horde of mythologys from other cultures too.

I consider this the closest thing that one can get to a Japanese version of Edith Hamilton. Yes, I know that it's not complete, and I still have to get a lot of Japanese folk stories, especially in relation to ghosts but I think it's a good way of seeing the roots of Japanese culture as a whole.

The Japanese kana in the book are early enough to listen to and the additional English version (is not a literal translation) is easy too. I think for a person who is learning Japanese is a good way to get introduced to the most known fairy tales of Japan.

Exactly What I Wanted

This book is exactly what I had been looking for to quench my thirst for knowledge of Japanese mythology.

I Love The Myths

Anybody who is history or myths buff will love this book. It goes into the Gods of Japan and how Japan was created by them. It tells of how the first king is related to the gods. It also goes into folk stories that every Japanese child knows.

Please get a native speaker to read.

While the content of this book is great; the pronunciation is terrible. I can tell the reader is trying his best. His pronunciation isn’t even consistent between sentence to sentence. And there are obvious pauses while attempting to pronounce names which made it difficult to listen to. I would have much rather a native speaker read or someone with basic proficiency of the Japanese language read.

The stories are interesting and intriguing mythology, but the narrator often either speaks too fast or has awkward pauses. The EXTREMELY fast pace makes it difficult for material to sink in. It sounds like he’s trying to just rush through the material. Each word and sentence just blends into the next, and chapters. It will feel like you’ll be in the middle of a story, then he just says “chapter 3, from section five. Boom, begin of story”. Difficult to enjoy, aside from mythology.

a nice overview but very shallow. the performance is very inconsistent and had mistakes, awkward pauses etc.

This is some kind of joke right?

Story is fine. It's dated Japanese stories translated to Engligh. But what the heck is this narration? It feels like the Narrator just showed up for work on the day of recording and winged it. He confuses himself so many times you can even hear him pause before trying to pronoince a name. Overall ruins the enjoyment of the book.

The stories of Shinto/Japanese myth are always amazing and I’m happy to have a short and concise collection of them that highlights the most significant ones.
However, the narrator sounded as if he was reading this all in one take, consisting of several pauses and awkward sentence readings that disrupted the flow. It would also be nice if he could pronounce the words and names correctly.

narrator is not great, he mispronounced several things, and has poor timing while reading. the story reads like an essay and it doesnt go into any depth.

the narrator made constant mistakes, stuttered, repeated words and didnt correctly read japanese names or places, it was a struggle to listen too honestly.

Not good, not bad.

A pampflet of stort summarum

this is a whar i imagine a pampflet on an bustour would be. no story telling , dry , shallow and told as if recanted for the 100 time.