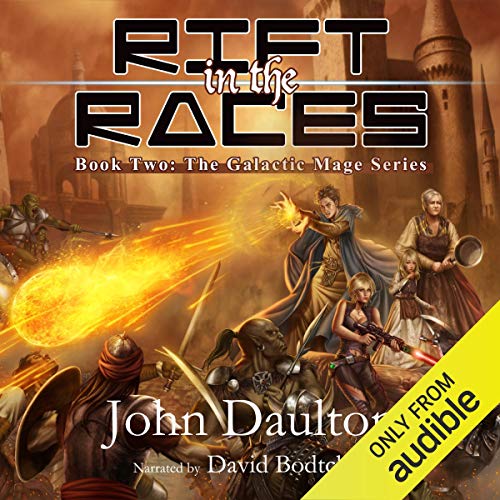 Rift in the Races

Rift in the Races (Book 2 of The Galactic Mage Series) follows the continuing story of powerful Prosperion sorcerer Altin Meade and feisty Earth-fleet officer Orli Pewter in the fight against the mysterious alien Hostiles.

The Earth fleet is now moving to take advantage of its recent victory. With better combat strategies and Prosperion wizards only a blink away, the time has come to finish the job they set out to do: destroying the Hostiles. But complications arise.

Altin's discovery of space-traveling humans from distant Earth has threatened ancient and foundational beliefs for the people of his world. The shockwaves from this revelation begin to unravel a long-standing but precarious balance of power. With her eyes to the sky and all its galactic possibilities, Prosperion's War Queen soon finds her realm on the brink of chaos.

Together, Altin and Orli must once again find a way to mediate the forces of pride, frustration and fear between their two peoples, or both planets will be destroyed. What ensues is an action-packed, laser-blasting magic ride through space, war, romance and conspiracy - a thrilling tale of alliances and alien hostility.

Unfortunately, sometimes "alien hostility" is a matter of perspective.

Rift in the Races is the second book in The Galactic Mage series. Book 1, The Galactic Mage, and Book 3, Hostiles, are now available. Book 4, as yet untitled, is underway and expected in 2014.

What listeners say about Rift in the Races

what was going through his mind?

if I wanted to listen to people deny the world and what they see all around them then I would watch the news. Asad can go bugger himself and Orlii can join him. pretty much the whole book is about Orlii whining and crying and Asad proclaiming that everyone is out to get him :(

Very slow and was hard work but set up for book 3. Not a stand alone if recommend but a good second book in a series. On to book 3

look forward to what happens next.

a nice but pretty long story. so much happened here and there and the story telling was great and understandable.

Altin is no more Mr Nice Mage and Orli’s blaster is locked and loaded.

The slow start of the first book has given way to an avalanche of action, striking with the power of a fireball and speed of a laser. The stage has been set closer to the ground and the spotlights reveal plots and twists.

The War Queen shows she is a BADASS! While a certain Fleet Captain still remains an ASS. The love story between our Mage and Fleet Officer makes you want to help get them a room, but the war, strife and misgivings surrounding them will keep you listening.

An interesting premise wasted on a typical plot "twist" ("oh no, the genocidal alien who wiped out the entire population of a planet is REALLY just a poor misunderstood creature that should be allowed to get away with it because they're sad they did it out of a misunderstanding...") along with characters that went from likeable to insufferable as the story progressed soured the story for me. The only thing that kept it marginally listenable was the command performance by the reader who genuinely can do a wide variety of voices and accents that greatly increase immersion. This was almost enough to kill me on the series.

Narrator does an incredible job with the voices

Awesome story! So much fun. Narrator does an amazing job with the voices. Highly recommend this series.

This book series has a good story premise. Its original. But for the love of all that is holy some of the characters found in here are just ridiculous. The mc is interesting and filled with a lot of good detail but the support character orli is just so stupid. But so is the captain which I just can't stand. All in all I had to force myself to finish this book and find myself thinking it unlikely that I will continue the series

What disappointed you about Rift in the Races?

Overall this book is written like a young adult novel, which would be fine except for the frequent f*%$ bombs that just don't match the silly subject matter and story. The writer is sloppy and inconsistent in his use of the magic system, changing the rules in an ad hoc manner as needed to fit each new silly arbitrary conflict. Much of the book could be cut out as irrelevant to the main plot line... it's trash novel filler material.The first Galactic Mage book was cute, creative and a fun read. This fails to add anything new, but instead flops around like a fish out-of-water from one cliche to the next leaving me gasping for meaningful traction. I had to give up after about 9 hours of predictable groans.

Have you listened to any of David Bodtcher’s other performances before? How does this one compare?

Yes, and his performance in this book is good too. Garbage in, garbage out.

What character would you cut from Rift in the Races?

OMG. Kill off the stupid Captain Asad. Not showing any character growth at all for the main characters to still be dealing with this shallow one-note, boring, repetitive character